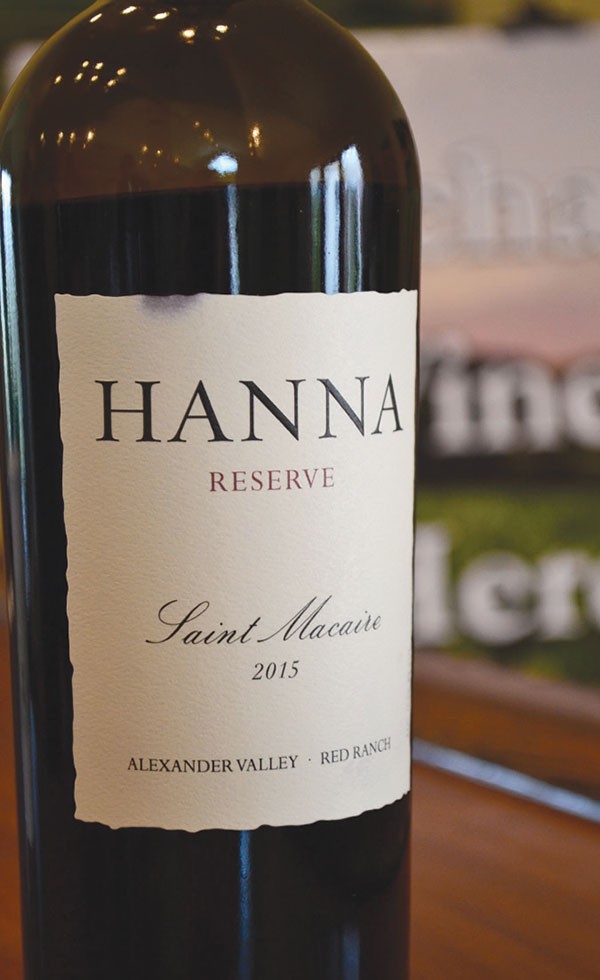 While claims of unique wines from unique terroirs are nothing new to Napa and Sonoma County wine country, Hanna Winery has recently turned out something that’s truly, well, unique: a varietal wine made from Saint Macaire, a nearly extirpated French grape that’s finally getting a little respect in California soil.

The story of Saint Macaire starts a bit like a trick question: What is the sixth member of the classic Bordeaux quintet of grapes? The usual suspects include Cabernet Sauvignon, Merlot, Cabernet Franc, Malbec and Petit Verdot, but in California the Meritage Alliance also allows the use of Carmenère, Gros Verdot (you knew there had to be a Gros Verdot, when there’s a Petit), and the even scarcer Saint Macaire, which is so rare as to be functionally nonexistent in Bordeaux, according to Jeff Hinchliffe, winemaker at Hanna since 1998.

An experimenter, Hinchliffe wanted to take the winery in new directions, while staying true to founder Dr. Elias Hanna’s favored Cabernet Sauvignon–based wines. “The idea was, we’ll stay in the Bordeaux box, but let’s explore the corners of that box,” says Hinchliffe. The first corner was planted with Malbec, and it was a success, yielding intensely red-fruited wine with soft tannin.

Saint Macaire was harder to track down, but didn’t come out of nowhere: it was widely planted in Bordeaux prior to the phylloxera root louse that devastated French vineyards, and was grown in University of California trials in the 1880s and again in the 1940s. Ultimately it was deemed only suitable for the warmest of California growing regions.

It was a different time, a different climate: Hinchliffe is betting that Saint Macaire’s attributes of color stability and higher acidity will help bolster their Bordeaux blends in the toastier times to come. Planted in 2012, Hanna’s half acre is half of California’s total Saint Macaire vineyard—over on Howell Mountain, O’Shaughnessy grows a bit to blend with its Cabernet, and it has been spotted in old vineyards amid misfit grapes like Pinot
St. George and Béclan noir.

Hanna’s 2015 Reserve Alexander Valley Saint Macaire ($68) fits somewhere in between Charbono and Petit Verdot: violets, burnt coffee beans and Syrah-like savoriness, with dried black olive and clove oil or spiced tea, suggest a big wine, but the finish lets up on the tannins and the wine easily sloughs off its 100 percent new oak. Some may object to the 16 percent alcohol by volume. Regulations permit wineries to label such a wine as low as 14.5 percent, Hinchliffe went the honest route. Perhaps another rarity in the wine world .