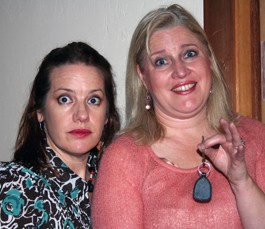 People, our fans, tell us that they love the quickness and the variety of Tapas,” explains actress-director Lois Pearlman of Pegasus Theater Company in Monte Rio. “There’s something so entertaining,” she says, “about seeing a whole bunch of wonderful little plays, all performed bam-bam-bam in a row. It’s just a lot of fun!”

Named for the Spanish appetizers that come in a wide variety of flavors and forms, the cleverly titled Tapas is a showcase of short one-act plays served up every year or so by the hard-working, theater-making people of Pegasus. This year, the tapas experience also includes a playwriting workshop with one of the featured playwrights, Santa Rosa author David Beckman.

According to Pearlman, the little theater by the river has been collecting submissions for almost a year, and the final selection of eight plays features work by playwrights all over the Bay Area, including three from San Francisco. Tapas also gives the various Pegasus’ regular directors an opportunity to experiment with new forms and styles of theater.

“Sometimes, there are some really interesting submissions that don’t speak to any of us as directors, so they don’t get picked,” Pearlman says. “We choose the plays based on which ones are the best, but also the ones we each are dying to direct.”

The two pieces that Pearlman will be directing are Gussie and Sam, by Naomi Newman of the Traveling Jewish Theater, and The Life and Times of Young Jon Sugar, an autobiographical “memory play” by San Francisco&–based performance artist-activist Jon Sugar.

“Gussie and Sam are a Jewish-American man and a woman in a nursing home,” she explains, “and they are pretty much staring in the face of death, but they are each irritated at the paltry, unspectacular circumstances surrounding the end of their lives, which don’t match the grandeur, excitement and adventure of their actual lives. They’ve each had long and interesting lives, and as Sam says, after a life lived with dignity, one should not be forced to call for bedpans that may or may not arrive in time. It’s a funny, charming little play, full of laughs and wonderful moments, and it ends beautifully, and sort of hilariously, with the couple shouting, ‘Bring me the death that belongs to me!’ The play is actually quite upbeat.”

As for The Life and Times of Young Jon Sugar, Pearlman explains, “it’s the author’s autobiography of his early years growing up in Miami as a precocious gay boy with a very weird family. It’s very, very funny and interesting, and sort of unexpected and surprising. It’s been a very challenging play to direct, because it’s basically a one-man show with 12 walk-on parts, but it’s been worth the effort because it’s really incredibly delightful.”

Here’s the scoop on the other Tapas offerings:

Isn’t It Fabulous, written by Beckman and directed by Scott Kersnar, is a whimsy-driven comedy involving a restaurant, starfish soup and a dog that might be a unicorn. Kersnar also directs the one-woman monologue Gypsy by Berkeley writer Lynn Snyder, which involves a mother considering the ethical implications of opening her daughter’s mail.

Crap Shoot, written by longtime Pegasus actress-director Jacqueline Wells, is an intensely personal play about two people whose lives are changed by a long-delayed meeting. Wells will also direct the piece, along with another titled Tightened to a Point, by San Francisco’s Alina Trowbridge, in which a husband and wife have only 10 minutes to pull all of their belongings from their newly impounded car.

In the unsettling No Vacancy, written and directed by Darlene Kersnar, two women on their way to an impeachment rally in Washington have a bizarre and mysterious series of encounters in a small town in Kansas. Finally, the emotional Cleaning Out, written by Evelyn Jean Pine of San Francisco and also directed by Darlene Kersnar, features a cathartic house-cleaning, as two women box up their recently deceased mother’s belongings.