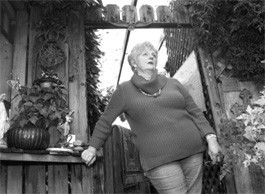 Photograph by Robbi Pengelly
Still standing: Alice McAdams has lived at the Sonoma Grove for a quarter of a century and intends to stay regardless of the changes.

The do-your-own-thing spirit of the hippie era keeps a toehold in Rohnert Park, thanks to an agreement between a group of tenants and the owner who bought the 152-unit Sonoma Grove Trailer Park a little over a year ago.

“I think both sides worked hard to come to a settlement that we can live with,” says Candace Birchfield, a Grove resident since 1983. “Both sides had to make compromises.”

As reported in these pages a year ago (“Home, Sweet Trailer,” Jan. 25, 2006), Sonoma Grove is a hidden haven of laid-back serenity in southern Sonoma County. For decades, the Grove was an out-of-the-mainstream retreat whose residents lived extremely low-cost lives in a hodgepodge of vintage trailers and RVs, most augmented by hand-built decks and entry halls, long-established gardens and various whimsical accoutrements. Residents who had enjoyed the Grove’s funky charm were up in arms last year at new owners who had intended to purchase an RV park–not a commune. Conflicting visions remain of what the Grove is and will be.

After Houser Holdings LLC bought the Grove in November 2005, rules were tightened and rent increases announced, with some jumping more than 100 percent. A number of residents left. About 20 followed the advice of lawyers and organized a rent strike, which led to a flurry of eviction proceedings. More residents moved out.

After nearly a year of friction, a deal was struck. Exact details of the legal settlement are confidential, but all of the long-term residents who remain in Sonoma Grove–about 80 or so–have had to move to the southern end of the 5.5-acre property, leaving the north portion free to operate as an RV park for people passing through.

One thing that hasn’t been settled is how the Grove is viewed. The owners say that legally it is and always has been an RV park, but residents see the Grove as the home of a special, almost magical community.

“It can take you back to another place and time,” explains Linda Robbins, who’s lived in the tree-shaded Grove for more than eight years. “You think differently in a place like this. You see things differently. You relate differently.”

“The world out there is so fast-paced, and it’s all about upping the Joneses, about having a new car,” adds Alice McAdams, who’s spent 25 years in Sonoma Grove in her 38-foot trailer. “We can live at a simpler pace here, and it doesn’t make it wrong.”

For Teresa Thurman, a co-owner of Houser Holdings LLC, Sonoma Grove is simply one of only three RV parks in Sonoma County with what she considers an “ideal” location for tourists. A Lakeport resident, Thurman presents herself as a wife and mother of two small children who is simply trying to earn a living. “We’re a business,” she says. “We’re an RV park. People want to come to stay here.”

A rumor floating around the Grove says the property will soon be sold to developers.

“We never bought the park to develop it. That’s [an idea] that was created by someone else,” Thurman says. “It is what it is. It’s an RV park. We have no plans to do anything else.”

Thurman says that she intends to make the north end of the Grove more up-to-date and attractive to overnight guests, but doesn’t know exactly what will be done. “We’re still making those decisions.”

Grove residents are waiting to see what will be happen next. Some are anxious because, under the settlement, Thurman could increase the rents in September.

“Technically, she can raise the rents to $650 a month and still be within the limits of low-income housing. But what we are is extremely low-income tenants,” explains Ian Southerland, who moved to the Grove in his fifth-wheel trailer four years ago. For him and others, $650 is too much.

“I’d like to live here for the rest of my days,” he adds. “In reality, I think we’ve only been given a reprieve. If she chooses to raise the rent to a point where I can’t afford it, I’ll have to move. The majority of the people here are living on $800 to $900 a month.”

Thurman is sympathetic but businesslike. She hopes to keep things affordable, but it’s normal, she says, for a landlord to increase the rent each year; the Grove is no exception. “Their concerns are legitimate, but they aren’t any different than those of anyone who is renting.”

That won’t be an issue until September. Meanwhile, there’s a tentative peace. “We all came together at a Christmas party, and I was very happy to see that we were all able to break bread,” Thurman says.

At least one resident is still facing eviction proceedings, but for the others, things are relatively calm, at least for the moment. Many feel the struggle to stand up for their rights strengthened their sense of being a special community.

“I think we really did accomplish something that’s really amazing,” Birchfield says. “I’m sort of speechless. We didn’t waver. We hung in there and we saw it through to its most logical conclusion at this point in time.

“I think we’re very lucky to still be here.”