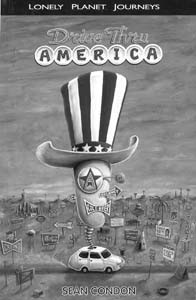 Drive Thru America takes a bumpy, low-octane spin across this Sweet Land of Liberty.

DON’T WORRY: You still have two precious months to make for distant horizons before summer ends and the gray skies of autumn close in over your sunburned head. If you’re planning on taking off for exotic locales–Botswana or South Carolina–chances are fair that you’ll find yourself grabbing a travel guide from Lonely Planet Publications. What you may not know is that, in addition to compiling tips for wayward wayfarers, Lonely Planet also publishes literature, albeit literature related to travel.

That could be a good thing, or it could be very bad indeed. After all, while few people may know more about travel than a travel guide publisher, you will be forgiven for wondering just how much these folks know about the art of writing.

In the case of Brief Encounters: Stories of Love, Sex & Travel (Lonely Planet; $12.95), your fears are mostly misplaced. Editor Michelle de Krester has managed to round up a luminous collection of short works about romance in locations ranging from Martha’s Vineyard to Peru. There are even contributions from such accomplished authors as Paul Theroux, Peter Ho Davies, and Sara Wheeler.

Steamy romances between tourists and natives are the rule here, as the writers explore with a keen eye the complications of love on the run.

Don’t, however, get the wrong idea from the title or the racy cover art: The emphasis in Brief Encounters is more on love and travel than on sex, which is rendered in terms tasteful or euphemistic (depending on your point of view) in all but a few stories. There are exceptions: Tom Whalen’s “In the Restrooms of Europe” is a poetic, elegantly graphic story about the persistence of desire that rises far above mere erotica.

Many stories involve romantic encounters between relatively wealthy tourists and citizens of such Third World countries as Peru and Egypt. It’s hard to imagine a situation more fraught with complications: Race and power form an inevitable subtext. Brief Encounters usually features a woman as the libidinous tourist, which raises an interesting question: Does the editor think stories about men waving a crisp “See ya” to their Third World lovers are more likely to cross the line into sexual imperialism?

To their credit, many of the writers confront this head-on. Mona Simpson’s American heroine in “Ramadan” has a brief romance with a young Egyptian man who speaks very little but who still manages to leave the reader with the distinct feeling that it is his American lover who has utterly misunderstood the encounter. Other stories are not as satisfying in this regard, but on the whole, Brief Encounters delivers deftly drawn portraits of cross-cultural romance.

Alas, would that all of Lonely Planet’s forays into the literary world went as smoothly. Drive Thru America (Lonely Planet; $12.95), by Australian author Sean Condon, is many things–tedious, self-indulgent, unrelentingly unrewarding–but most of all, it is a cautionary example of exactly how not to write a book about a road trip across the United States.

The key to this difficult genre–which has been dominated by the likes of Jack Kerouac, William Least Heat Moon, and Charles Kuralt–is to talk more about the road than about yourself. That axiom has utterly escaped Condon, who is still happily prattling on about what a bad boy he was in the second grade long after the reader has quietly turned the page and skipped ahead in search of more interesting topics.

Condon may well have written this entire book on a huge pile of Post-its: The vignettes are short and choppy to the point of inducing nausea. Just when we start to sink into one of his less than thrilling tales about scoring coke in New Orleans or being disgusted by gutter punks in Santa Cruz, the story is abruptly over and we’re back on the highway.

This effect is exacerbated by the book’s irritating mix of fact and fiction. The author gleefully admits that he has fabricated part or all of many of these stories. The trouble is that even his fictions rarely succeed at being either convincing or amusing. In the end, Condon has merely managed to relay a random series of grubby experiences in a country that he clearly regards as dirty and dangerous.

“I’m in America. I’m very excited,” the author tells us. Great, we’re tempted to reply: Now go home, and take your book with you.