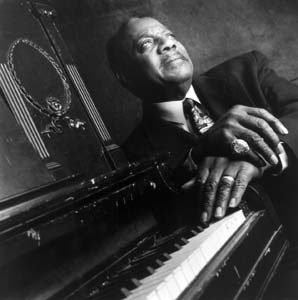 THOSE TWO have a strange thing,” says Rolling Stone guitarist Keith Richards, describing the relationship between rock legend Chuck Berry and pianoman Johnnie Johnson in a scene from the 1987 documentary Hail! Hail! Rock ‘n’ Roll. “Chuck just walked in on Johnnie’s band in a little club in East St. Louis one day and took it over, you know.”

The cadaverous-looking Richards–who served as music director for the film and butted heads with the temperamental star–goes on to slight Berry in several scenes, not for shanghaiing Johnson’s band, but for snagging a fair share of musical ideas from his sideman without giving Johnson songwriting credits.

“[Johnson] ain’t copying Chuck’s riffs on piano,” Richards mumbles. “Chuck adapted them to guitar and put those great lyrics behind them. But without somebody to give him those riffs, voila!, no song, just a lot of words on paper.”

The film helped bring Johnson to the attention of the general public, and led in 1991 to a pair of hot albums released within weeks of each other: Johnnie B. Bad (Elektra/Nonesuch) and Rockin’ Eighty-Eights (Modern Blues), which helped set the record straight once and for all that Johnson, 73, is one of the great unsung heroes of rock ‘n’ roll.

More recently, Johnson–who performs at the upcoming Sonoma County Blues Festival–can be heard on the North Bay band Rhythmtown Jive’s On the Main Stem (Globe Records), on which he performs on seven tracks.

Johnson, a West Virginia native, is a natural. He’s been playing piano since age 7, shortly after his mother bought him an old upright. “The moment the movers brought it into the house, I sat down and started playing,” he recalls, during a phone call from his St. Louis home.

From the beginning, Johnson emulated the percussive boogie-woogie and stride piano styles of Count Basie, Earl “Fatha” Hines, Duke Ellington, and others whose music was beamed into the Johnson household from nearby Pittsburgh on a late-night radio show called “Dawn Patrol.”

“I found out that I had a heck of an ear and could pick up things,” he says. “You know, go back and play the sounds that I could discern in my ear.”

In 1941, the then-teenage musician traveled to Detroit and took a job at a Ford Motor defense plant. Two years later, he joined the Marines, only to return to Detroit after the war to work at an auto plant and to play casual weekend gigs. In 1950, he migrated to Chicago, the center of the postwar blues renaissance. There he met and played with blues legends Muddy Waters, Howlin’ Wolf, Little Walter Jacobs, and Jimmy Reed, among others.

“Wherever you went in those days it was wall-to-wall people,” he says. “That’s when I really started taking a notion to play blues like this.”

Three years later, he moved to East St. Louis and took a day job with the Pennsylvania Railroad. The evenings, however, were spent performing with his own trio at local clubs. By year’s end, Johnson had met a promising young guitarist named Chuck Berry. “He was playing at a place called Hough’s Garden and I was playing at the Cosmopolitan,” Johnson explains. “I went up to check him out and kind of took a liking to the type of music he was playing because it was what I was raised up around in West Virginia–hillbilly music.”

JOHNSON HIRED Berry to fill in for his usual singer-guitarist at a New Year’s Eve party. Berry stayed on and began honing the flamboyant stage act that would one day earn him a place in the Hall of Fame. Yet, if Berry gets at least as much credit as an individual for inventing what would come to be called rock ‘n’ roll (after all, where would the genre be without those famous three-chord progressions and patented Chuck Berry riffs?), then Johnson served as midwife to the birth of the genre. Indeed, it was Johnson’s friend Muddy Waters who introduced Berry to Chess Records label chief Leonard Chess, paving the way in 1955 for Berry’s first recordings, “Maybelline” and “Wee Wee Hours.”

And it was the pianoman’s distinctive rhythmic flair that lent those early records so much vitality.

“Chuck and I get along very well,” says Johnson, who toured extensively during rock’s infancy with deejay Alan Freed’s package shows.

These days, Johnson is reluctant to criticize his old cohort for not sharing the fame or the royalties. “All of the work that Chuck did was his own,” Johnson says modestly. “All I did was help provide the music. The lyrics were strictly Chuck’s–I had nothing to do with that.”

Still, Johnson is enthusiastic about his new role as a frontman and bandleader, and it’s clear that a solo career suits him just fine. “Yeah, this is news,” he concludes with a hearty laugh. “And it’s great, except that I have to carry the responsibility now for keeping track of income taxes and all that stuff that I didn’t have to put up with as a sideman.

“I’m just hoping that these albums will help me go much further because this is all mine now.”

Johnnie Johnson performs, with members of Rhythmtown Jive, at the Sonoma County Blues Festival, on Saturday, Aug. 8, from 2 to 9 p.m. The show, which is free with admission to the Sonoma County Fair, will be held at the Redwood Theater. Also performing are Lavay Smith and her Red Hot Skillet Lickers, W. C. Clark, James Armstrong, Terry Evans, and the Michael Barclay Blues Band. Sonoma County Fairgrounds, 1350 Bennett Valley Road, Santa Rosa. Admission is $5, ages 13 to 60; $2 children, ages 7 to 12; and free, ages up to 6. For info, call 545-4200.