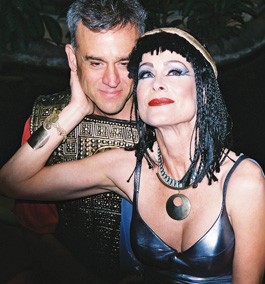 By the final moments of William Shakespeare’s epic drama Julius Caesar, the Roman warrior Mark Antony has become a full-fledged hero: brave, strong, charismatic and wise. In the sequel, Shakespeare’s rarely performed Antony and Cleopatra, his heroics are a thing of the past. It’s a bit shocking to see what’s become of poor, weak, love-besotted Antony, and that’s part of the fun of this choppy but entertaining soap opera about love, lust, politics and really bad decisions.

In the current outdoor production at the Marin Shakespeare Company—the first time in over 40 years that this play has been staged in the North Bay area—director Lesley Currier puts her emphasis on the over-the-top emotional underpinnings of the story, sometimes pushing the show to the edge of camp. That’s not a complaint. Currier takes a story that almost begs to be played as camp and manages to keep it just this side of that, while still allowing her actors to go for the thick gooey gusto of their roles.

Antony (Marvin Greene, suitably intense), now one-third of the three-man power team that rules the Roman Empire, has become a matter of concern to the other rulers, particularly Octavius (William Elsman, calmly brilliant), the son of Julius Caesar. Whereas Antony was once a great warrior, his appetite for the battlefield has been traded for the temptations of Queen Cleopatra (a buoyantly energetic Marcia Pizzo) and the splendors of her Egyptian court.

Now more of an aging party boy than a fearsome fighter, he spends his days cavorting with the queen, eating and drinking with his right-hand man, Enobarbus (Steven Klum, who as usual does much more with his small role than seems possible with the scant details Shakespeare gives to work with). Meanwhile, there is trouble back home in Rome, with various armies attacking Octavius, who must do the best he can without Antony’s sword. That one of his enemies is Antony’s spurned wife Fulvia, with an army of her own, only adds to Octavius’ irritation with his hooky-playing partner.

One of the best scenes in the show is the tension-filled meet-up between Antony and Octavius, and Shakespeare’s writing here is as good as it gets (in this conspicuously knocked-together effort by the playwright, anyway). As the second act becomes a series of chronologically linked vignettes depicting the inevitable wars and betrayal, Cleopatra becomes more needy and manipulative as Antony goes rapidly cuckoo. The result is both gripping and occasionally hilarious, a kind of satire poking fun at the vanity of the world’s richest and most famous.

There are some truly weird moments, and some jarringly odd performances too, with Julian López-Morillas’ troubled Egyptian snake seller (who is strangely Irish) chief among them.

Instead of hurting the show, all of this adds to the fun. Yes, others might have played this material with the stilted seriousness we too often give to historical figures, but in the hands of this cast, and with Currier’s benevolent permission, this Antony and Cleopatra remains faithful to Shakespeare’s cleverly cynical and outrageous vision.