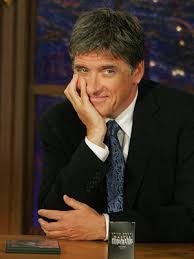 Amusing the amnesiac drunks of the world while they slobber Stouffer’s dinners on themselves in the middle of the night isn’t anyone’s idea of a great job. But to Craig Ferguson, it caps a long journey from a young punk rocker in Glasgow, Scotland, to construction worker to bouncer to modern dancer, and finally, to taking the place of Craig Kilborn as host of CBS’ Late Late Show. Ferguson’s new memoir, American on Purpose: The Improbable Adventures of an Unlikely Patriot, chronicles that journey, with a lot of alcohol and cocaine along the way, but what emerges from the haze is a humble, funny man who very desperately wanted to become an American. He achieved citizenship in 2008, and wears a red, white and blue kilt on the cover of his books and, one would guess, whenever else he can. He appears on Saturday, Sept. 26, at Book Passage. 51 Tamal Vista Blvd., Corte Madera. Noon. Free. 415.927.0960.Gabe Meline