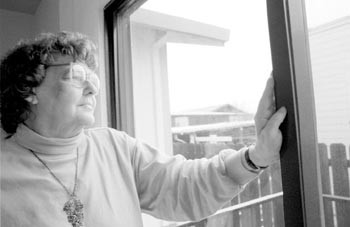 One of the lucky ones: With the help of the Petaluma Ecumenical Project, 72-year-old Arlene Morgan has found a one-bedroom apartment that costs just 30 percent of her gross annual income in rent.

ARLENE MORGAN is one of the lucky ones, as she herself is the first to admit. Although her only source of income is a monthly Social Security check averaging $800, the 72-year-old grandmother and former university professor is still able to afford a roof over her head with enough left over for food, clothing, and an occasional trip to the Shodakai Casino north of Ukiah.

With the help of the Petaluma Ecumenical Project, a nonprofit organization that provides affordable housing for the elderly, Morgan was able to obtain a one-bedroom apartment in a complex located a few blocks from Highway 101.

For the last three years she has paid 30 percent of her gross annual income in rent, and despite the close quarters she’s happy with where she lives.

“Senior low-income housing, a place like this, is ideal for people who don’t have many things,” she says, glancing around her simply furnished living room. “It’s a very small space.”

Fortunately, Morgan is used to packing light. In the 1970s, she left Mountain View to teach psychology at the University of Queensland in Brisbane, Australia. She returned to California in 1993, after her grandchildren were born, and discovered that housing costs had risen dramatically while she’d been away.

“When I was in Australia, I wasn’t thinking about getting a backlog of funds. That has never interested me,” Morgan says.

“I had no investments, no real estate.

“I was just staggered when I came here. It was going to take all of my Social Security just to pay the rent! I took one look at the cities [in the lower Bay Area] and I knew that wasn’t an option.”

While she looked for a place to live, Morgan stayed with her daughter-in-law in Tomales. It was clear that the only affordable long-term option was subsidized housing. “I might have been able to afford to rent if I didn’t live too long, ” she says dryly, “but you can’t count on that.”

When Morgan discovered PEP, the waiting list for apartments was more than 200 names long. Managers told her it would be two or three years before she could expect to hear anything. She signed up anyway.

Then came a stroke of luck. An opportunity arose to return to Brisbane to teach for a few more years, and she took it. While her name inched up the waiting list in Petaluma, Morgan was traveling around Australia doing research for a book on the status of aborigines in prison. When she returned to California in April of 1996, PEP officials told her the wait was down to about half a year.

Though it took all the money she had, Morgan rented for two months while she waited. Then she got lucky again. An unusually high turnover rate led to several vacancies, and that June, with nothing more than a couple of suitcases, Morgan finally moved into a PEP apartment. And for the foreseeable future, that’s where she plans to stay. “I’m very fortunate,” she says. “There’s a real spirit of community here in Petaluma.

“I don’t know how we’ve been able to maintain it.”

Is Help on the Way? Yes, if President Bill Clinton’s proposal to provide 120,000 affordable-housing units is approved by Congress.

THE POPULATION of Sonoma County, like that of the rest of the country, is growing older as it grows larger. A recent report from the U.S. Department of Health and Human Services’ Administration on Aging shows that over the next 30 years, as an escalating population in general and the baby-boom generation in particular reaps the benefits of advances in medical science, the number of elderly people nationwide is projected to double.

“The rapid growth of the elderly represents in part a triumph of the efforts to extend human life,” says Jacob Siegel of the Administration on Aging, “but these age groups also require a disproportionately large share of special services and public support. There will be large increases by 2030 in the numbers requiring special services in housing.”

The 1999 annual report from the Association of Bay Area Governments brings the numbers closer to home. According to the report, in the next 20 years the number of people in the Bay Area over age 65 will increase by 719,000, or 90 percent, to a total of more than 1.5 million.

And in Sonoma County, seniors searching for a place to live are up against a housing market that a study by the National Association of Home Builders says is the fourth least affordable in the country.

There are now more than 11,000 seniors in the county who, like Arlene Morgan, are living on Social Security or low fixed incomes: think $700 a month, or less. With low-income housing already scarce and waiting lists for the Department of Housing and Urban Development’s Section 8 subsidy program often as long as two years, the elderly in Sonoma County are caught in the middle of a housing crisis that is just beginning to get a lot worse.

“Seniors are coming to us on an almost weekly basis with evictions,” says Shirlee Zane, executive director of the Council on Aging. “It’s very typical to see a client [who has] a reduction in their SSI, their utilities are going to be turned off, and they simply can’t meet their rent.”

Pam Wallace, director of the Interfaith Shelter Network, estimates that 12 to 15 percent of her clients are seniors, though not always in the legal sense. The Department of Housing and Urban Development defines a senior as anyone past the age of 62, but Wallace sets the bar considerably lower.

“Our generation, the baby boomers, are coming up on 50,” Wallace says. “Many of the people we see who are over 50 are really frail and at risk. The other factor is that many of the men are Vietnam veterans, and we see a large percentage of them who are homeless. Rather than waiting until people decompensate even more, we think that establishing a lower age for seniors is a good idea.”

Susan*, a 53-year-old woman who had been living out of her truck following an eviction, found not only a room but employment through IFSN. She works part-time as an administrative assistant at the transitional housing facility where she now lives.

“I can set my own hours,” Susan says. “Pam trusts me to get the job done. Nobody’s had that kind of faith in me, or me in myself, for a long time.”

Still, both the job and the living space–which she shares with a roommate–are temporary. Tenants at the housing facility take part in a six- to 12-month program that includes regular meetings with a credit counselor. When the program is over, they are expected to make way for others.

Susan is feeling hopeful for the first time in a long time, but she knows that her financial difficulties are far from over. “Resources for people between 50 and 62 are real limited,” she says.

“[Advocacy] groups tend to focus on families with kids. The potential for gainful employment is limited when you’re my age. I have no retirement, nothing in savings. It’s scary.”

AT A TIME when the need for low-income housing is greater than ever, many landlords are opting out of renewing their subsidized-housing contracts with HUD. And in Santa Rosa, tax-exempt mortgage revenue bonds issued by the city in the 1980s are reaching the end of their 10-year affordability requirement.

Landlords who have paid off the bonds are no longer required to maintain low-income rental units. Many are now charging market rates, effectively displacing residents who cannot afford to pay more.

At Apple Creek Apartments on Third Street and Dutton Avenue, one of the properties to take advantage of the city’s bond agreement, the units that for more than a decade were affordable to low-income families are now priced at the market rate.

Some 48 residents, many of whom are senior citizens, have had to find housing elsewhere.

Property manager Martha Jared didn’t want to force her low-income tenants to move; in fact, she voluntarily extended the agreement for two years to help them. But with the market skyrocketing, she was losing money. For a one-bedroom apartment, Section 8 funds have a cap of $684 per month. The market rate for that apartment now starts at $925. Apple Creek’s loss on its low-income apartments thus ran close to $14,000 a month, or $168,000 a year.

JARED IS PROUD that she has been able to help all her former tenants find new residences. When she heard through a contact in the housing department that a new complex was about to open up, she leaked the information to her residents before it went on the market. “When a new place opens up, it gets filled up so quickly,” Jared says.

Few developers are now willing to take a chance on low-income housing. John Lowry, executive director of Burbank Housing Development Corp., points out that a development marketed at $500 a month per apartment would lose money on every unit.

“There’s quite a bit of market-rate senior housing [being] developed by private developers,” Lowry observes.

“But the closer you get to market rate, the less demand there is. As far as we can see, the demand for subsidized senior housing is huge out there, because they all fill up.”

“Santa Rosa has more affordable housing now than at any time in the 1990s,” Brownell says. “I think the city is doing a good job in a very difficult market.”

Not everyone is convinced of that. Affordable-housing advocates such as Shirlee Zane say that the city discourages high-density, low-income housing with fees, restrictive building codes, and a convoluted permit process.

“Builders of affordable housing have to jump through these hoops and obstacles that the city gives them, and they can’t profit,” Zane says.

“If you’re a developer, you have to profit.”

Profitability may be the bottom line, but it’s not the end of the story. As landlords, developers, advocacy groups, and government officials struggle with the logistics of our housing crisis, the number of elderly, low-income people in Sonoma County continues to climb.

These are real people, housing advocates say, not statistics or dollar signs. And they’re not going away.

* Not her real name.