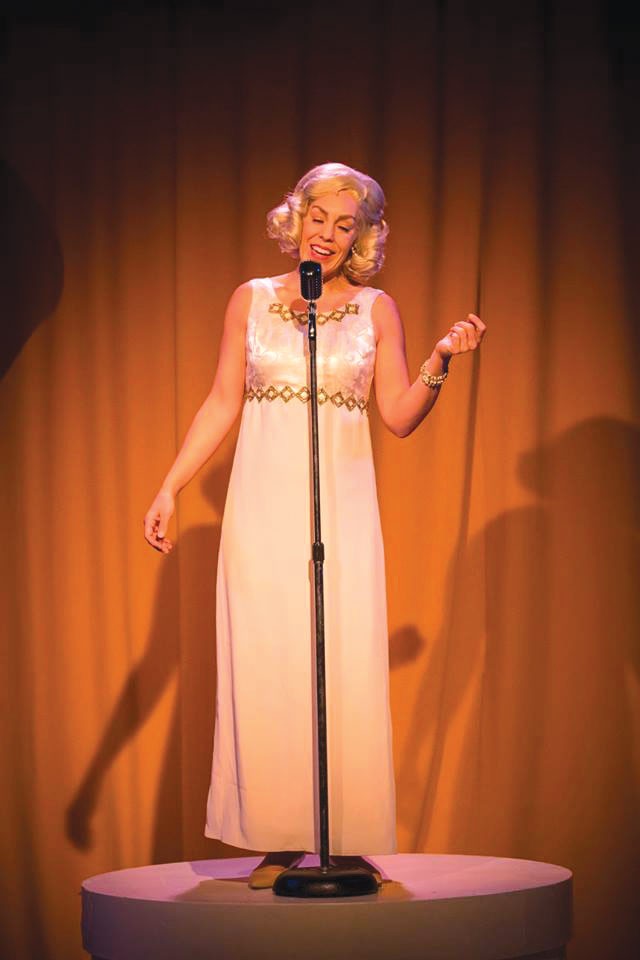 Ask anyone under 50 years of age who Rosemary Clooney is and they’re likely to respond “George Clooney’s wife?” They’d be in the ballpark (she was his aunt), but what they may not know is that she was an immensely popular musical performer who charted numerous hit songs in the 1950s and ’60s.

Changes in the musical landscape combined with a struggle with mental health issues led to Clooney’s star fading. After an onstage breakdown and years of therapy, she was the rare performer who managed a “second act” in showbiz when she turned to jazz. She continued to perform and record until her death in 2002.

Composers, lyricists and playwrights Janet Yates Vogt and Mark Friedman use Clooney’s breakdown as the jumping off point for Tenderly: The Rosemary Clooney Musical. The show uses the framing device of Clooney’s therapy sessions to tell her tale.

After melting down during a performance in Reno, Clooney (Taylor Bartolucci) finds herself in the care of psychiatrist Dr. Victor Monke (Barry Martin). At first reluctant, she soon finds herself opening up about her struggles.

It’s a standard showbiz melodrama wrapped up in the songs for which Clooney’s known, like “Hey There,” “Botch-a Me,” “Come On-a My House,” “Mambo Italiano” and the title tune. Bartolucci gives a restrained performance as Clooney, which is appropriate given the intimate performing space and subject matter.

Martin is challenged by not only playing her confessor, but every other person that Clooney encounters in her life, including her mother, her sister, her uncle, various radio station employees, Frank Sinatra, Bing Crosby and the husband she was married to twice, José Ferrer.

Shifts in time and location are indicated by simple lighting changes, and character transformations for Martin are expressed with slight costume modifications. It’s their effect on Clooney that matters.

The enjoyment of jukebox musicals often depends on the type of music used and how well it’s represented on stage. Music director Craig Burdette, his three-piece combo and performer Bartolucci represent Clooney and her style well, and overall, Lucky Penny’s Tenderly brings a little luster back to Rosemary Clooney’s faded star.

Next ArticleLetters to the Editor: February 28, 2018