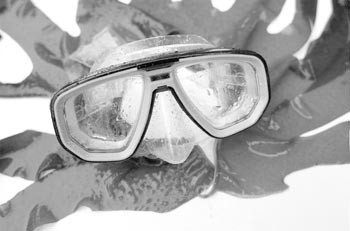 LIKE MANY of its breed, Eleanor and John Lewallen’s cabin near Mendocino is cozy in a cluttered, back-to-the-land sort of way. An ancient gas stove sits next to a modern wood stove. A prism in the window casts rainbows across the reading alcove, with its sagging, homemade shelves of books. But the real clues to the Lewallens’ lives are in the jars lining the kitchen counter.

Where others might store tea or pasta or spice, the Lewallens keep their seaweed.

“Their seaweed” is not as simple as saying, for example, “your can of seasoning salt,” unless you had laboriously harvested the seasoning salt by hand and hauled thousands of pounds of it uphill in backpacks and pushcarts. “Their seaweed” is the Lewallens’ livelihood, their food, their peculiar passion. But it’s not as peculiar as I thought it would be. As Eleanor shakes four or five dried varieties into very domestic pink-flowered dishes to sample, I taste and listen and think idly about how normal it seems.

“You always should rehydrate seaweed in water first,” she says as she covers one bowl, containing gnarled ribbons of sea-palm fronds, with cold water from the tap. She’ll be mixing these and flakes of bull whip with a little rice vinegar for a simple Asian-style seaweed salad. The soaking doesn’t take long, maybe five or 10 minutes, but it is essential. “You can soak it in vinegar, but it picks up the flavor quickly, and it’s too strong for people,” says Eleanor as she pours the now dull-green soaking liquid into a pan to save for later. “After all, you don’t make pickles with dried cucumbers.”

MOST AMERICANS know the Lewallens’ favorite food as something to gross out siblings with or to pick our way delicately around as we comb the shores for more interesting items like seashells or clams. Sushi and macrobiotics notwithstanding, seaweed harvesters such as the Lewallens are up against an intense food taboo. But the Lewallens have waded right into the fray to move their beloved greens beyond the stereotype of stinking flotsam.

When they first started harvesting and selling in 1980, the beachcombing couple regularly shared their wares at the Mendocino Farmers’ Market and at simple-living fairs around the North Bay. They visited a route of natural-food stores in the Bay Area to give out samples, much as Eleanor is offering them now, in quick nibbles and recipes from their self-published cookbook, Sea Vegetable Gourmet Cookbook and Wildcrafters’ Guide.

The couple is much less of a public presence now: Eleanor is convalescing from cancer, aided, she says, by regular ingestion of sea vegetables. But their mail-order business is thriving, and each season the Lewallens are joined at their harvesting sites by a steady trickle of visitors, including chef-students from the Culinary Institute of America at Greystone in Napa County.

“Those chef students don’t really start using it that much, but at least they get the idea that maybe it’s food,” says John, his empty backpack flapping loosely. “They really just like to walk on the beach.”

That’s an understandable laziness, an urge, or lack of one, that often hits on a deserted beach. Here is calm, especially in the company of the moon-faced Eleanor, who picks up pieces of drift for her collages and waxes poetic all the while.

“The ocean is so beautiful and strong,” she says dreamily. “It gives us so many gifts.”

Meanwhile, John strides off ahead of us and peers intently at the tidescape for signs of seasonal beginnings. For millennia, Native Americans of the California coast followed the same paths, focusing their search primarily on nori. It is too early to harvest in quantity–the best season is in June and July, with harvestable growths coming in as early as March–but the signs of the new season are there.

“See those little brownish flags out there?” says John, pointing out to the wash of the low tide. “Those are kombu. We’ll harvest a lot of them. But it’s still too early.”

He eats pinches of the first fucus tips out of a little plastic bag and offers me a few. They look like snakes’ tongues, forked and slithery. On the inside they are gelatinous, a little like aloe vera, and only slightly salty.

He folds the bag into his pocket and turns his attention to the crevices full of water that cut across the tidescape. “Here we have alaria, or wakame,” he observes.

He bends to lift a limp, dull-green frond from a narrow pool, and slices through it with a rusty, hooked blade. Then he crams one end of the wide ribbon of seaweed in his mouth and chews thoughtfully as he walks carefully along the edge.

“If all goes well, this whole thing will be full later,” he says.

He offers me a mouthful off the new end of the wakame frond; fresh out of the ocean, the stalk is crisp, and the leaf gives in reluctantly to my teeth in a rubbery burst of good green flavor, like kale.

ON OUR WAY BACK to the sand, John stops to point out the first blackish blooms of nori, lying like ruffles along a damp rock. It’s nothing like the stiff blooms that Eleanor offered us in the kitchen, much less like the sheets of toasted nori that wrap around Japanese delicacies. It is cool, chewy, and mild-tasting–most of the sea vegetables are fresh to the palate.

Closer to the shore, Eleanor leans down to show me one of their other crops, a seaweed for the bath. Balancing on my rubber boots on the fading shoals, I stroke the wonderfully rough strap, a long reddish ribbon called Turkish towel that combines the best qualities of a loofah and a terry-cloth towel.

The sun is going down, it is getting hard to see, but I can still feel. And this piece of seaweed doesn’t feel weird at all.

Combine all the ingredients, adding roasted nori and parsley last and reserving 1/8 cup nori and 1/4 cup green herb for garnish. Adjust ingredients to taste. Serve on a bed of lettuce, garnished with remaining herbs and nori and slices of red and green bell peppers.

To roast nori, place desired amount of dry nori in an iron skillet over medium-high heat. During roasting, turn nori gingerly with fingers, continually feeling for crispness, which should happen in 30 to 60 seconds. Remove each piece of nori from skillet immediately, as it becomes crisp, breaks easily, and, being very light and delicate, can burn in an instant. If you smell any burning odor, immediately lower heat and quickly remove roasted pieces.

Nori also can be roasted in the oven; again, watch it closely as it can burn in an instant (preferably, use this method only when oven is already hot from previous use). Nori can also be roasted on an auto dashboard on a sunny day or on a wood-heat stove in use.

Roasted nori is a crisp, crunchy, mildly salty condiment that can also be munched as a wholesome snack food.

Recipes adapted with permission from Sea Vegetable Gourmet Cookbook and Wildcrafter’s Guide, by John and Eleanor Lewallen (1966). For details on the products of the Mendocino Sea Vegetable Co., including the cookbook, see the Lewallens’ website at www.seaweed.net or call 937-2050.