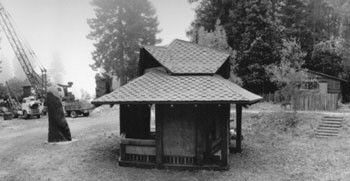 Sculpture Sonoma, 2005–coming to a venue near you

Dr. Walter Byck is a miracle worker. Certainly, the retired physician helped to save many lives during his long career. Certainly, the wines that he and his wife, Marijke, produce at their Paradise Ridge winery are remarkable. But such merely human feats pale compared to Byck’s most recent swoop of prestidigitation: he has somehow–mirrors? smoke?–convinced every major arts organization in Sonoma County to work amicably together toward the same goal. And they said that humankind would never walk on the moon!

Byck’s effort is not unlike the terrors and trials of space travel. Using only his enthusiasm and overworked cell phone, the sweet result of Byck’s efforts is titled Sculpture Sonoma, 2005, and involves almost every sculptor in Sonoma County concurrently showing work at 12 disparate exhibition spaces in the late, hot, wane of this coming summer.

Venues include the Byck’s own Sculpture Grove–celebrating its 10th anniversary of presenting challenging, cutting-edge art in a magnificent five-acre outdoor setting–as well as the Museum of Contemporary Art, the Sonoma County Museum, the Sonoma Valley Museum of Art, the Charles M. Schulz Museum, the Cultural Arts Council of Sonoma County’s gallery, the Sebastopol Center for the Arts, both of the SRJC campus galleries, Sonoma State’s prestigious University Art Gallery, the city of Santa Rosa’s Finley Center and even the city of Cloverdale, which has been greatly involved of late in presenting public sculpture.

The concept evolved with the Byck’s Sculpture Grove approaching its decade mark. “The idea was to honor local sculptors and to create a cooperative venture,” Byck explains by, yes, his cell phone. The doctor asked his artist friends to compile lists of those colleagues and peers whose work they most admired in order to create a pool of talent.

Karen D’Or, executive director of the Cultural Arts Council, has helped to shape the resulting pool of talent, and the event and her gallery will act as an anchor to help unite the disparate venues into a comprehensible whole for visitors. Byck’s miracle helps the arts council move closer to its chosen goal of coordinating often competing venues for the greater good of all.

And good it is. World-renowned artist Mark di Suvero–who splits his time like a tourist’s T-shirt between New York, Paris and Petaluma–will be placing works in Paradise Ridge’s wine cellars, as his outdoor pieces are simply too massive to be erected for just one year. Cazadero artist Bruce Johnson is bringing what Byck terms his “most ambitious venture,” The Poetry House, to settle in among the oaks; Byck has been busy for weeks grading a pad for its placement. Light sculptor Charles Churchill will exhibit his jazz-infused electrical miracles at the Finley Center.

Cloverdale artist Carol Setterlund will enjoy a tremendously well-earned one-woman show at the Sonoma County Museum, while large-scale civic sculptor Robert Ellison will show works at both Paradise Ridge and the MOCA. Sea Ranch-based bronze sculptor Robert Holmes, who keeps a foundry in Sebastopol, has agreed to participate. Woodworker and HGTV host David Marks is creating a gilded redwood piece for Paradise Ridge that Byck claims to be “absolutely astonishing.”

Perhaps most astonishing of all is that there is funding. The Community Foundation of Sonoma County, a grant-making nonprofit dedicated to supporting the arts and human services, itself just received a large endowment from the James Irvine Foundation, a name familiar to those who watch and listen to public media. In a truly shocking state of affairs, monies from the Irvine grant are available to promote Sculpture Sonoma, 2005, as well as to produce a slick, four-color catalogue and maps to delineate the countywide placements of art.

Byck, who proposed to his wife outside of a sculpture garden in Holland almost half a century ago, is near giddy about seeing a life’s dream take on physical scale outside of his own property. “I am a physician. I like math and physics. And then I met Bruce Johnson. Now,” he chuckles with unabashed glee, “I know more sculptors in Sonoma County than anyone.”

And for that we thank you, Dr. Byck.