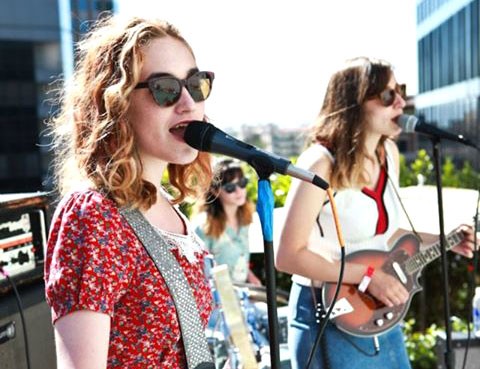 After being questioned about the dearth of women artists at his events, local concert promoter Jake Ward was inspired by the Free Pussy Riot movement to put on a women’s art and music showcase.

“I do a lot of rock shows, and I wanted to find local rock bands that were all-female,” says Ward, who put out a Facebook call for all-women rock bands in the North Bay that didn’t result in many leads.

Undaunted, Ward worked with the Arlene Francis Foundation and CMedia to put together a lineup of live music from the She’s (sunny garage-pop from San Francisco teens, pictured above), the Wild Ones, Ashley Allred of Odd Bird and Slinky Minx. Local women artists Sara Davis, Julia Davis, Kaija Sabbah and others are creating new Pussy Riot and feminist-inspired art to be featured in a gallery setting. Speakers include Elaine Holtz, longtime host of Women’s Spaces, and information on the Free Pussy Riot cause will be readily available.

Ward has high hopes of inspiring more women to take up instruments and start a damn band already. “I’m hoping that women who come to this show will think, wow, this could be a whole scene and maybe it’ll grow from there.” The Free Pussy Riot Women’s Art Gallery and Music Showcase happens on Monday, Sept. 30, at the Arlene Francis Center. 99 Sixth St., Santa Rosa. 6–10:30pm. $7 (no one turned away for lack of funds). 707.528.3009.