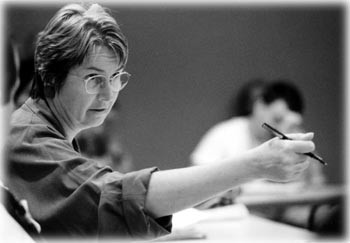 Steaming mad: Santa Rosa City Coucilwoman Pat Wiggins tells officials from the city’s Board of Public Utilities that she is “appalled” over a proposal to push ahead with plans to send local wastewater to The Geysers without comparative studies.

SR Council splits over plan to pipe wastewater to The Geysers

BOARD of Public Utilities Chairman Richard Dowd jokes that his snowy white hair was still brown when he first started looking at possible solutions for disposing of Santa Rosa’s treated wastewater a couple of decades ago. “It’s been a while,” he quips.

Indeed, it’s been 12 years since state water officials ordered the city to find an alternative to dumping millions of gallons of wastewater each year into the Russian River, following a disastrous spill of untreated sewage into the river and neighboring property. Now, finally, some Santa Rosa city officials believe they are closing in on a solution. Or are they?

“Yes, we are. We’re getting to the end of the race,” says an optimistic Dowd after a sometimes heated discussion this week between City Council members and the BPU. “We should make a decision by the end of the year.”

The city has been pursuing several wastewater-disposal alternatives, including massive irrigation in southern or western Sonoma County, increased discharges into the Russian River, and the use of wetlands to transform wastewater into drinking water. It even considered employing a system of incinerating, waterless toilets. But, until recently, the Russian River option seemed to be the leading contender. Under that controversial but inexpensive plan, the city would be allowed to increase discharges to 20 times the current permitted level.

Then, last week, after several weeks of public hearings, the city’s BPU fixed its sights on the Geysers option, which would pipe 11 million gallons of treated wastewater daily to the geothermal electrical generating plant along a 34-mile pipeline. On Tuesday, the BPU met with council members at a joint study session to explain its recommendation that the City Council zero in on the plan to pipe its unwanted wastewater to The Geysers, the remote geothermal wells 12 miles east of Cloverdale in the foothills of the Mayacamas Mountains.

The proposal had been deemed impractical at first because of high pumping and maintenance costs. But, in August, the option re-emerged when an offer by a consortium of six geothermal energy companies–affectionately known to the BPU as “Team Geysers”–entered the discussions. In the eyes of the BPU–and a majority of the City Council–the energy consortium’s offer to pay more than $50 million of the pipeline project’s $132 million construction costs makes the option fiscally competitive with the alternative of increased river-dumping.

According to the BPU officials, ratepayers would also benefit. Instead of the original $74 per month increase under the original Geysers proposal, they say, the average ratepayer would pay between $6 and $12 more per month under the Geysers plan.

“Because of the money that Team Geysers has put on the table, that particular alternative may make more sense then the others,” says Dowd. “That’s not to say this is the final one the board has selected, but we’re not spending any more money [to consider] other alternatives.”

However, some council members are balking at the thought of shelving the other options. “When you have a multifaceted solution, you tend to last longer,” says City Councilman Mike Martini. “I was encouraged that components were coming together, but now we’ve gone back to a single solution.”

COUNCILWOMAN Pat Wiggins echoes Martini’s concerns. “I’m appalled that [the BPU is] saying we’re not to look at any more studies,” she says. “I don’t think the Geysers [option] is a savior. No one’s benefiting from profits coming into this private industry. [Instead] we could be helping our biggest industry–agriculture.

“The Geysers are good for the [elimination of] wastewater, but they don’t serve the economic growth of our own community.”

Councilwoman Noreen Evans points out that the Geysers option has “a number of uncertainties and is not a long-term solution.” During the study session, she encouraged the BPU to conduct supplemental studies, and not just focus on the one alternative.

“We’ve not selected the Geysers alternative; we’re just focusing attention on it to get the nuts and bolts,” reiterated Dowd.

“How can I evaluate that in a vacuum without looking at the nuts and bolts of other alternatives?” Evans shot back.

Still, the majority of the seven-member council clearly favors the Geysers proposal. “You’re moving in the only direction possible at this point,” Councilwoman Janet Condron told BPU members. “It’s put up or shut up time. We really don’t have a concrete option in front of us for ag reuse and no names for viable storage reuse.”

While Councilman Dave Berto says he has no problem with the BPU’s recommendation to pursue The Geysers as the city’s main option, he wonders what will happen “if they run out of the need for water economically.”

Under the Geysers option, north county farmers and vineyard owners in the Alexander Valley must be willing to provide land for storage ponds and irrigation so wastewater can be siphoned off along the pipeline’s route for agricultural use. But BPU members say expectations that farmers will come forward with offers to let the city use their lands have not been realistic. Some council members disagree, saying the agricultural community has shown an interest in using the wastewater for irrigation.

“Any solution for ag reuse would have to have 1.2 billion gallons of additional storage upfront,” says Dowd, who adds that the primary opposition to the Geysers plan is that the pipeline would bisect private property. The National Audubon Society has complained that the proposed pipeline would disrupt a 1,400-acre wildlife sanctuary. Another concern is that the increased activity at The Geysers could contribute to additional earthquakes. “Our consultants say that won’t happen,” Dowd says.

The City Council and the BPU will continue their joint study session on Tuesday, Oct. 21. A final decision on the selection of one option is expected sometime in December.

In the past four years, the council has paid $15 million to study the problem. In the past two years, state officials have granted several extensions and set a firm Sept. 30, 1999, deadline for a long-range solution.