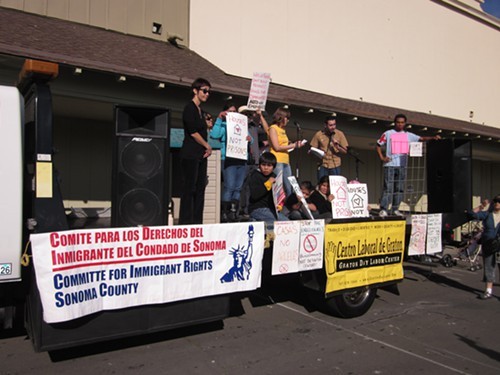 On Friday, Jan. 6, Occupy Santa Rosa joined with the Committee for Immigrant Rights, the Graton Day Labor Center and other Sonoma County organizations in a rally and march against Wells Fargo’s position as an institutional holder of stock in Geo Group, Inc. The for-profit corporation builds, maintains and runs private prisons, including immigration detention centers in Arizona and California. For more information, check out a news blast from the Dec. 28 issue of the Bohemian.

Maureen Purtill and Jesus Guzman of the Graton Labor Center speak to the crowd of about 200 in front of the old Albertson’s on Sebastopol Road about Wells Fargo and the rally. Purtill translated everything into Spanish.

“It’s wonderful to see the Occupy movement really out in embracing the immigration rights movement,” said Richard Coshnear, an immigrant rights attorney from Santa Rosa. After discussing the profit motives and laundry list of offenses at immigration detention facilities in the United States, he said, “The treatment of prisoners in detention is bad, but it’s worse in for-profit private institutions.”

Juan Cuandon and an unidentified man portray people held in detention at a private prison during a theater performance just before the march to the downtown branch of Wells Fargo Bank. 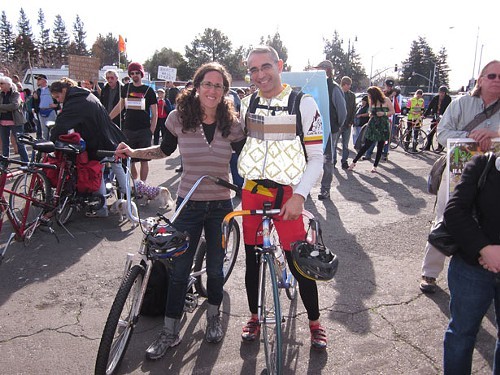 David Ortega of Occupy Petaluma rode his bike to the march from Petaluma. He was joined by Wendy-O Matik who rode her bike from Sebastopol.

85-year-old Marjorie Golden came out to support the fight for immigrant rights and the Occupy movement. 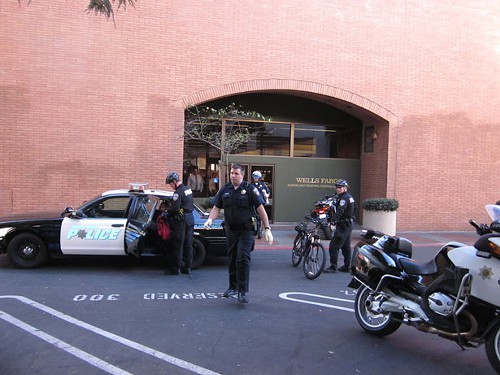 Two people were arrested outside of Wells Fargo after they attempted to “mic check” inside of the downtown branch, according to Occupy Santa Rosa organizer Carl Patrick. The bank locked its doors just after the protestors arrived. Police did not allow anyone on the property, including press, claiming “private property.” Wells Fargo representatives did not respond to a written request from the Bohemian to speak about the closing of the bank or the protest.

Jerry Camarata of Sonoma County said that the orange jumpsuits printed with Sonoma County Jail symbolize the connection between private detention centers and the Secure Communities program run by Immigration and Customs Enforcement (ICE). “They are allowing undocumented workers to open accounts while funding these private detention centers that profit off of the same workers,” said Camarata.

As bank customers approached the doors of Wells Fargo and found it locked in the middle of the day, many walked away grumbling about the inconvenience of the protest. “I love my bank,” said this woman, who refused to give her name. “You can kiss my ass!” Soon after, she nearly got into an altercation with a protestor while retrieving money from the ATM.

Not everyone found the rally and protest inconvenient. Here, the protestors cheer after one man, upon hearing about the possible connection between Wells Faro and immigration detention centers, said that he was going to move his money to another bank.