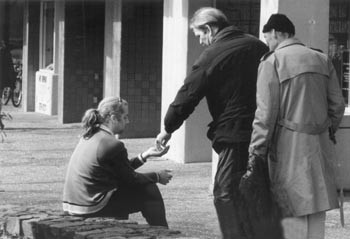 Santa Rosa may clamp down on panhandling

JO BARRINGTON, a legal secretary who has been working in downtown Santa Rosa for 10 years, expects to get hit up for change every time she goes out for a sandwich. “It’s gotten more intense. Sometimes in a half-block walk I get asked four times for money,” says Barrington, petite, no-nonsense, and clearly fed up. “You’re not going to catch my grandmother or my sister walking downtown.

Echoing the sentiments of many downtown merchants and shoppers, Barrington thinks panhandling is getting increasingly intimidating. “I’m getting sick of it,” she says. “Before, you saw people who seemed to be mentally disturbed. That’s a tragedy, and if it was my family I’d want someone to give them a dollar. I don’t know if it’s a fad, but it’s more and more kids and homeless.

“I give sometimes, but not to able-bodied young people,” she adds. “I object to providing recreation money.”

Santa Rosa is not Berkeley or San Francisco, where “Spare change?” is a litany that is part of the cultural landscape. But these days begging is a burgeoning issue even in the heart of serene Sonoma County. City officials, aiming to nip the problem in the bud, have put together a committee charged with deciding whether the city needs more stringent laws to regulate panhandling.

“We’ve had a lot of complaints from retailers and businesses in the downtown area about the issue. We’ve had complaints from citizens,” says Mayor Janet Condron. “I walk into a business downtown and the owner says, ‘What are you doing about this?’ ”

The problem Condron refers to is not hard to detect. One rainy February afternoon, a few blocks from city hall, three street people are hanging out around a trash can in front of the main library. After asking for a quarter and getting nothing, a middle-aged woman named Barbara starts discussing the finer points of panhandling.

“I know who to ask or not ask,” she explains. “Never ask a person with a newer car or clothes. The more they’re well dressed, the more you expect not to get a penny,” she says, her green fingernail polish chipped, and long blond hair covered with a powder-blue stocking cap.

Still, he says, he never panhandles in Santa Rosa. He washes windows. “But I learned to panhandle in Berkeley, right along with the best,” he says, his lack of front teeth clearly showing as he laughs hoarsely. “Panhandling is an honest dollar. If I ask, they can say ‘Yes,’ ‘No,’ ‘Get a job, bum.’ I’m not waiting for little old ladies at ATM machines.”

These two street denizens have never followed people down the street, they say, or blocked someone’s path, or crept up on people at their bank machines. But Fourth Street Market Deli owner Pete Mogannam says such behavior does exist in Santa Rosa, along with cursing, name calling, and giving the finger. “When you’re prevented from crossing the street, you’re going to think twice about coming downtown to do shopping,” he observes.

Panhandling, says ACLU attorney Alan Schlosser, is a topic in nearly every city in Northern California these days. “It comes up often because there’s a frustration that there are people who are really poor and on the streets, and there is pressure to do something about it,” he says. “Local communities have limited means to do something, and these [panhandling] ordinances are an outlet for the political pressure.”

Santa Rosa, like most cities, already has a panhandling ordinance. But, says Police Sgt. Anthony Wynne, it requires that a victim be accosted and then make a citizens’ arrest before the police can step in. “That’s not much of a tool for us to deal with a situation where panhandling becomes a nuisance,” he says.

Bay Area cities like Berkeley, San Francisco, Palo Alto, and Mountain View all have passed recent laws in an attempt to curb the kind of panhandling that some call a nuisance and others feel is downright intimidating.

The Berkeley City Council proposed an ordinance that would prohibit begging after nightfall, approaching people near bank machines, and coercing or following people who have said no to a request for money, as well as soliciting money from anyone sitting on a public bench, putting money in a parking meter, using a pay phone, purchasing a newspaper, standing in a theater or restaurant line, or waiting for a bus.

The ACLU filed suit, and eventually Berkeley’s ordinance was watered down to regulate only begging near ATM machines.

“It was too broad,” Schlosser says. “The courts have clearly said that panhandling is protected speech. It is considered the same kind of speech as soliciting donations for political activities or charities. It can’t be prohibited. It can be regulated, but [laws] have to be narrowly tailored to deal with real problems.”

“We regard these ordinances with suspicion,” he adds. “Often the motivation seems not to be criminal activities or behavior, because then you could pass laws dealing with the behavior. Often the goal is to get people considered bad for business off the street. That is not permissible. You can’t pick and choose who’s going to be on city streets.”

Santa Rosa’s eight-member committee panhandling, made up of homeless advocates, business owners, and city officials, is looking for solutions, not draconian measures, say members. The group met for the first time Feb. 16, and plans several more sessions before sending its findings to the City Council.

Says committee member Daniel Cortez, director of public relations at Redwood Gospel Mission, “The bottom line is how we can come up with something that will work for the community and benefit the panhandlers in a positive way.”