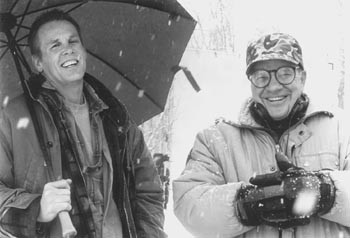 Angst for the Memories

Man on the edge: Oscar-nominated actor Nick Nolte, left, and writer/director Paul Scrader share a moment of levity on the set of Affliction. The underrated Schrader’s other projects include Taxi Driver, Blue Collar, and Mishima.

LONELINESS has been following me my whole life,” Says Travis Bickle in Paul Schrader’s screenplay for Taxi Driver. It’s an elegiac line, and one that effectively describes its writers, as well as the cavalcade of existentialist antiheroes who populate his scripts and movies.

Almost all of Schrader’s stark, morally ambiguous films contemplate the downward spiral of a man or men caught in a spiritual and emotional prison of their own construction.

And the new Affliction is no different. Starring a gaunt-faced Nick Nolte, the film is adapted from Russell Banks’ resonant novel. Anyone familiar with the Canadian writer’s other screen-adapted work, The Sweet Hereafter, would agree that Schrader and Banks share a similarly bleak sensibility and fascination for flawed characters straddling the brink between despair and disaster.

Nolte’s Wade Whitehouse is the deputy of Lawford, N.H., a sparsely populated town well beyond its glory days. Life passed Lawford and Wade by a long time ago and, as the film opens, things have settled into a perpetually sour but bearable stasis. Then Wade’s ex-wife threatens to cut off his visitation rights to their young daughter, a vengeful act that sets the depressive on a paranoic path. Soon he is questioning the accidental death of a wealthy local union boss, ostensibly trying to inject some meaning and purpose into his painfully rootless existence. Wade’s indefatigable quest for the truth moves from obsession to madness as the story unfolds.

In New York to promote the film, the filmmaker acknowledges that Wade, a quintessential loner, fits the Schrader mold.

“It’s a spiritual loneliness,” Schrader stresses. “Wade certainly doesn’t lack for people to talk to, and he likes and is liked by the people around him. But there’s something essentially solitary about him.”

At the base of Wade’s sadness is the abuse he suffered at the hands of “Pop” Whitehouse (James Coburn)–a situation illustrated through judiciously brief, powerful flashbacks. The reign of terror of the perhaps ironically named abusive familial despot might snidely be summarized as “white house, no picket fence.” Thanks to Pop, Wade has arrived at adulthood as damaged goods, unable to conquer the affliction that haunts him.

As Pop, Coburn makes an auspicious return to the screen, infusing the surly alcoholic with a vivid sadism. Interestingly, Paul Newman, not Coburn, was the director’s first choice. “I wanted somebody who was large physically and who represented another generation of Hollywood manhood,” Schrader says. “That pool of actors is now quite small.”

Alas, Newman “didn’t want to play a bad guy.” Another decisive factor was the fact that the 74-year-old legend has grown a bit “frail” over the years and the role was “too physically demanding.”

SCHRADER’S STRICT Calvinist upbringing forbade moviegoing because of its “decadence,” so the Michigan native never even saw a film until he was an 18-year-old college student. The moral chasm between his childhood and his chosen profession inspired the simultaneous attraction and repulsion to the seedier recesses of human behavior that define Schrader’s most successful projects, among them Taxi Driver and Raging Bull, two of several collaborations with Martin Scorsese. Oddly, both films garnered a slew of nominations and awards for everyone involved except Schrader, though both have achieved classic status.

How does it feel to have been so egregiously overlooked?

“I don’t think much about it,” Schrader says matter-of-factly. “It’s better to have written them than not. Oddly, I was once asked about the ‘difficulty’ of overcoming Taxi Driver‘s success. To me, that film was like a burden lifted off my shoulders. It was an indication very early on that I had the ability to succeed in this business. And that moment of validation is something many friends of mine are still seeking–even after 25 years of writing.”

Next month, the tragedy-inclined director will start shooting Forever Mine, a romance starring Joseph Fiennes and Gretchen Mol. Due this fall is Bring out the Dead, a drama about a New York ambulance driver on the verge of a nervous breakdown. The project marks the reunion of Schrader and Scorsese after a decade-long hiatus. Fans concerned that Forever Mine might be a sign that the stony individualist is going soft–or, even worse, going Hollywood–should know that although it’s a love story, it’s one about “an obsessive, undying love.” And that’s territory the director knows quite well.