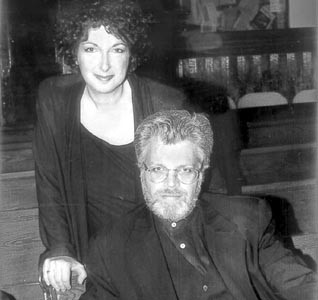 AND” MAY BE a simple word, but it shot straight to the heart of “Music and the Holocaust,” a 1997 symposium at Stanford University. “How can you put together with a little conjunction like that two things that seem to nullify each other?” asked English professor John Felstiner, an organizer of the event, during an interview with writer Leslie Katz.

Yet, as a number of scholars discussed at the landmark event, music was far from absent from the Holocaust. Ghetto dwellers sang traditional Yiddish and other songs. Partisans had their own defiant tunes. Concentration camp prisoners hummed and sang prayers and other melodies, sometimes on their way to death.

“In the camps, there was quite a lot of musical activity,” said Stephen Hinton, a Stanford professor of music who participated in the symposium. “There are reports of people having drawn considerable feelings of hope and solidarity from musical performances.

Indeed, the quest for hope and creative expression, even under the most horrific circumstances, reflects a fundamental human drive, said Felstiner. “This is human nature: People can’t stay away from the need for beauty.”

That lesson will be illustrated March 7 at “Ghetto Tango, Music in Extremis,” a rare performance of songs from the World War II-era Jewish cabarets and theaters of Poland and Lithuania during the forced incarceration by the Nazis in such cities as Warsaw, Lodz, Kovno, and Vilna.

The show, performed in Yiddish and English, is the brainchild of New York singer Adrienne Cooper and pianist/arranger Zalmen Mlotek. “The songs, for the most part, were made for entertainment,” explains Cooper, who first began researching the songs of the Holocaust as a history student at the University of Chicago. “That sounds odd, but the songs exhibit a very complex range of subject material and expression. Some are sad. Some are upbeat. Some are ironic, funny, and sharp. There’s a lot of class conflict.

“They reflect their experience.”

AS THE NAZIS rounded up Jews from the countryside and forced them into walled ghettos, the performing artists of those cities reflected on the tremendous social changes, sometimes in satirical spoofs that hinted at their hatred for the Nazis, sometimes in wry ditties that poked fun at their less sophisticated country cousins, and often in defiant anthems aimed at their oppressors.

“There is a continuity with the culture that existed before the war,” says Cooper, during a phone interview from her home. “You know, people were relocated to these ghettos and moved around from their own communities, but there had been theater and political cabarets and a tradition of musical performance preceding the war. What’s really interesting about this music, and very compelling, is that you see what was created anew and what was adapted from traditions that already existed.”

Most of the songs come from 1941-43, before most of the Jews were relocated to nearby concentration camps, the ghettos razed. Cooper unearthed many of the songs while serving as assistant director of the Yivo Institute for Jewish Research. “As a musician,” she notes, “I was able to draw on the archives there and on researchers who were gathering songs from the Holocaust survivors.”

Because there were so few ghetto survivors, the songs provide a window into the past and teach a valuable lesson about survival. “The songs do affirm that even under circumstances that suppressed creativity under the normal course of life, people were determined to continue to perform and use art as a way to communicate and comfort and fantasize and express rage.

“My hope is that the audience will come away with a sense of what it meant to be creative at that time, and gain an understanding of the full range of existence, so we don’t see them only as the subject of a memorial, but realize that their lives were incredibly nuanced and filled with expression.”