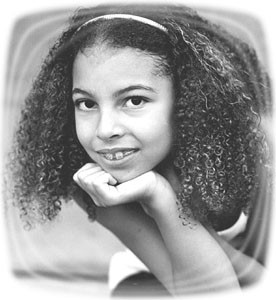 OVER APPLE JUICE and quesadillas in her West Oakland loft, 9-year-old published poet Sahara Sunday Spain talks seriously about her latest project: to help fund the schooling of the Kah-Mono girls in the African country of Mali. When she visited the region this past December, she was outraged that many girls couldn’t afford to pay for school supplies and were therefore excluded from an education.

After speaking eloquently on the subject, Sahara suddenly jumps up to grab a head of lettuce from the fridge–turns out she almost forgot to feed her beloved guinea pigs. It’s a telling moment. Perhaps, as some have said, Spain is part prodigy. But she is also a goofy, exuberant third grader.

Lately, the delightfully complex child has come to the media’s attention as something of a publishing sensation. See, Sahara has been writing and illustrating her own poems since age 4 and, with the help of her mother, Elisabeth Sunday, secured a hefty deal with HarperSan Francisco to publish her creative musings.

Released in January, If There Would Be No Light documents Sahara’s poetry and drawings since the age of 5. Spirited and childlike, her depictions of fish, butterflies, trees, and women accompany the words, which run the gamut from fairly ordinary to quite touching.

An excerpt from one poem, “Inner Self,” reads: “My heart swings with agitation/ and I fly within the boundaries of my heart. / And I meet with you, my angel of my wisdom–my heart, my everything.” Impressive prose for a small girl, though some of the poems inspire a bit less awe. “The Dog,” for example, reads in its entirety: “No matter what you do, you’ll always be friends with the dog.”

Describing what compels her to write poems, Sahara cites a litany of inspiration. “My mommy, dreams I have, stars, sunrises, love, and hearts inspire me,” she says. “Or, if somebody gave me a flower out of nowhere, that would touch me and I would write something. Whenever something touches me, I write a poem.”

This unjaded perspective, along with the poet’s incredibly young age, may be what attracted editors to her work in the first place.

“A lot of her poems are quite good for a girl her age,” says Calla Devlin, publicist with HarperSanFrancisco. “Then she has, in my opinion, moments of brilliance. Phrases pop out that are so mature and remarkable for anyone.”

But some have suggested that her well-connected mother, who is an accomplished photographer with some very famous friends, had more to do with Sahara’s lucrative book deal than her poems or drawings. The introduction to If There Would Be No Light was written by none other than Gloria Steinem. And the book’s jacket blurbs were provided by celebrities Bill Cosby and Bonnie Raitt. Apparently, Alice Walker is also a friend of the family, but has not been associated with plugging the book.

Devlin denies that these big names influenced HarperSanFrancisco’s decision to publish: “We chose Sahara’s works on their own merit, and we certainly weren’t the only publishing house that was interested,” she says. “But, of course, Sahara’s connections [to celebrities] have helped us promote the book.”

Elisabeth Sunday also considers this notion to be “nonsense and absolute rubbish.” “People want to hang easy tags on us, and that’s the most obvious, easy answer to why Sahara could be published,” she explains.

To believe this, it’s important to understand how Sahara was discovered. Her foray into publishing began when she made books of poems and drawings for her friends and family. The response was so overwhelmingly positive that Elisabeth then got the idea to sell the self-published collections at a local bookstore. Finally, Liz Perle, an editor with HarperSanFrancisco, happened to attend an art show that included Sahara’s works and got to talking to her mom. As fellow single mothers, they bonded–and the rest is publishing history.

If there’s one dark spot in Sahara’s seemingly perfect existence, it’s her long-absent father, Johnny Spain. A former Black Panther, Spain spent time in San Quentin in the 1970s and participated in a much-publicized uprising there. He and Sahara’s mother have been divorced since the child was 1, so Spain has had almost no presence in her life for the last eight years, according to her mother. They have no contact with him now, though he still lives in the Bay Area. But in spite of this fact, and much to Elisabeth’s chagrin, the press has considered him an alluring side-note to Sahara’s story.

Undoubtedly, the child is the moment’s media darling, interviewed by reporters from the New York Times to the San Francisco Chronicle and appearing on TV shows to promote her book. At such a young age, one wonders how she’s weathered the storm of publicity.

“I protect her from as much of it as I can,” her mother says. “Plus, she’s not allowed to see any press [clippings] until she’s 13. That way, the experience remains in the moment. And it’s just natural for her; she’s never been afraid of addressing a crowd. I tell her, ‘When you’re an artist, it’s part of what you do.'”

ALL THIS attention has briefly interrupted Sahara’s placid existence, but nothing can change the fact that she is still a third-grade girl. Sure, she has accompanied her mother on photo shoots around the world, is a published poet at age 9, and attends the prestigious Nueva School for the gifted in Hillsborough. But when describing her classmates, she giggles about a boy who had threatened to show her his underwear. And she conducted the majority of the interview for this article with a guinea pig on her lap.

Is Sahara Sunday Spain the only 9-year old who jots down her thoughts as words and pictures? Of course not, and even the young author herself says that what she did was not extraordinary.

Still, Sahara did have the good fortune to be born into a family that prizes art and creativity, and some of her poetry and drawings possess a wisdom beyond her years. A prodigy, though? Not in this writer’s estimation. Simply an extraordinarily encouraged child, given the mental space to hear what her mother calls an imaginative “inner voice.”

According to the young poet herself, the secret of her success is easily explained: “I didn’t work for the public. I worked from my heart,” Spain says. “I wasn’t drawing nudes to impress the kids in my class. That they liked it was good, but it came from my heart and that’s why I did it.”