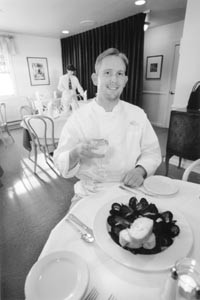 Flavors with a Spanish twist

IT’S EASY to fall in love with tapas, those tasty, tiny Spanish appetizers that accompany a glass of wine and beer and stave off hunger pangs between meals. In Spain, a typical day’s intake of tapas could easily involve cured ham and sheep’s cheese on rustic bread, a saucer of shining piquant olives, an array of crisp-fried fishes, a slice of tortilla, hot mussels grilled with olive oil and topped with breadcrumbs, thumbnail-sized baby clams immersed in white wine broth, and an earthenware pot of bubbling white beans and artichoke hearts cooked in fragrant amontillado sherry.

Just back from a recent trip to Seville, I still crave those distinctly Spanish flavors, and so I began a quest to replicate some of these tastes locally.

Enter Saffron Restaurant in Glen Ellen. Now, Saffron isn’t a Spanish eatery, although the name leads to that conclusion; and although it doesn’t technically serve tapas, it does serve a number of dishes with an unmistakably Spanish influence.

It also boasts a varied selection of Spanish wines.

There are burgundy tablecloths, and a heavy burgundy curtain conceals the restrooms. Tables are set with tea lights and miniature fresh flowers. An antique wooden sideboard is decorated with flickering candles.

A promising start to the meal is the green lentil soup of the day ($4.95) served in an oversized teacup. The lentils are whole and have a rich, thick consistency. The dish is similar to a wholesome lentil soup with carrots, onion, and garlic that I ate in Spain, except this version includes a mild hint of curry and is topped with crispy slivers of deep-fried onion.

Now there’s an old saying: “A man who is stingy with the saffron is capable of seducing his own grandmother.” That’s a scary thought. Fortunately, this chef’s steamed mussels with saffron, sherry, parsley, and garlic ($9.95) doesn’t stint on this precious spice–there are visible red-gold threads throughout the tasty broth. One qualm, though: some mussels are plump and juicy, but others appear to be dried out and don’t look appetizing. Maybe they were left too long under some heat source. We note, however, that on an earlier visit the mussels were fine.

Back on the search for food with Spanish spirit, the big attraction of the baby spinach salad ($8.95) is that it contains not only dried cherries and walnuts, but also Spanish Manchego cheese (also a fixture on most Spanish tapas menus), although we’d have preferred whole triangles of the tangy sheep’s cheese rather than just a mere grating. Still, our server thoughtfully brought over an extra bowl of grated cheese after we mentioned this. (It’s been a while since we’ve encountered such enthusiastic and willing-to-please wait staff.)

All in all, an excellent salad dressed in a subtle pomegranate vinaigrette.

Vegetarians with lumberjack appetites may enjoy the decadent house-made Stilton ravioli with chard and an herb-cream infusion ($13.95). The tomato pasta squares are crammed with Stilton cheese that’s pleasingly gooey in the middle. There’s more cheese in the creamy cheddar sauce, a blend of cream, thyme, white wine, and grated sharp cheddar. Quite a sinful little number.

THE DAY’S SPECIAL is roast squab ($22.95). The game bird is roasted and halved and served in a red currant sauce with baby corn, fava beans, diced red pepper, and roasted fingerling potatoes. The dark, steaklike meat is pleasingly tender, with a mellow flavor that’s stronger than chicken, milder than duck.

If you want to splurge, the 1997 Guelbenzu EVO ($38), a Spanish red wine from Navarra, composed of 70 percent cabernet sauvignon, 20 percent temperanillo, and 10 percent merlot, is smooth with a bitter dark-chocolate aftertaste reminiscent of cocoa powder on top of tiramisu.

Fresh-faced pastry chef Lindsey Ayers is youthful, but excludes real confidence and pride in her creations. She personally comes to the table to talk desserts and take orders. She then can be glimpsed in the kitchen lovingly assembling her edible art.

The Valrhona chocolate bread pudding ($6) has panache. The dessert is color coordinated, with hues of banana slices, caramel, chocolate sauce, and mocha gelato, all decorating a rich brownielike bread pudding.

Finally, don’t miss the heart-meltingly luscious Meyer lemon cheesecake ($6), one of the most heavenly desserts around. Add an after-dinner drink of Spanish Antonio Barbadillo dry sherry ($5.50) and you could almost believe you’ve dined in Seville.