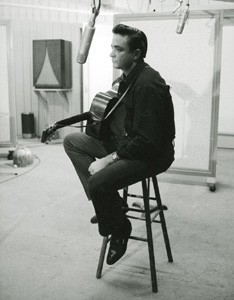 ‘Hurt’ So Good: Johnny Cash’s music was found on a third of all Sad 13 entries, his cover of ‘Hurt’ appearing an unconscionable number of times.

Sad Songs Say So Much

‘It’s a sad and beautiful world,” says a rumpled, heavily accented and perfectly misplaced Roberto Benigni in Jim Jarmusch’s 1986 movie Down by Law. Our Bohemian world has been filled with sadness and beauty of late, thanks to the 35 readers who, by sending us sad mix CDs, answered the call of the Sad 13 Challenge issued in our Nov. 2 issue.

The rules of the contest were simple: make the saddest CD or cassette tape in all of eternity. Each CD or tape had to contain 13 songs exactly, and no more than three songs performed or written by Hank Williams Sr. could appear on one CD. The winner (and–hooray!–there is one) receives booty straight off the editor’s desk in reward. The kind folks at KRSH 95.9-FM also kicked in a full box of brand new discs to plump up the prize.

I was hoping there might be some kind of way to decode the hundreds of songs contained on the CDs and cassette tapes we received, a way to organize them to divine what, exactly, makes a song sad. Is it a memory, a minor key, a touching lyric? Alas, it was not so simple. While we heard breakup laments, ballads of beloved dead pets and quagmires of general depression, we also heard seemingly jovial Everly Brothers’ love songs, that Moby instrumental ubiquitous in every TV commercial made in 2002 and, oddly, “He Ain’t Heavy, He’s My Brother.”

Under the influence of red wine and chocolate cake, our panel of judges waded through the sea of entries one cold and stormy night, and let me tell you, it was way more fun than judging a sad CD contest should ever be. It was also pretty difficult–how do you judge sadness? We tried our best to approach each entry and every song with an open mind, though it would be dishonest to say that we refrained from the pleasure of exchanging a few pointed, snarky comments–music elicits passions and opinions that will compress even the most open of minds. And we all agreed that John Lennon’s primal scream therapy on “Mother” is so not as sad as many contestants seem to think it is.

By the end of it all, we each went gentle into the good night, victims of sadness fatigue. I brought all of the mix CDs and tapes home in a big cardboard box so that I could listen to them properly in the dismal seclusion of my messy office. Driving home, I kept marveling at the sum of thought and feeling and misery contained in the cardboard box, almost as if it held a starving puppy and not a few dozen eviscerated ReadyPost envelopes. It was overwhelming.

It still is. Imagine sending a chain letter asking each recipient to make a mix CD and send copies to 12 friends, with directions to make their own CD and send it to 12 friends plus whoever is on the list. This is the stuff of holding a Sad 13 Challenge. It’s the kismet of chain-letter payoffs. What a windfall! We never imagined such a response–and while getting a load of CDs was not the original motivation, it sure is a great benefit.

Contestants who ventured into the boggy waters of the Sad 13 allowed me to hear all of the great songs in the world that I never knew about: Gene Wilder as Willy Wonka singing “Pure Imagination”; Johnny Cash’s detectably surly take on “It Ain’t Me” delivering the potent sting of rejection; PJ Harvey’s “C’mon Billy” opening floodgates of vengeful abandonment mingled with teenage lust.

Only a handful of instrumental tracks made it to Sad 13 Challenge entries. Does this mean that the lyrics, more than the music, determine a song’s sadness? To the folks who answered the call of the Sad 13, I would say yes. Stories make people sad, and sad lyrics more often than not tell a story. Think of all the happy ballads you’ve ever heard. Coming up short? That’s because a happy ballad would probably make a really brief, forgettable song.

The focus on pop music was near absolute, and we’re not talking about poppy songs like Ashlee Simpson or American Idol crap here–we’re talking about uppercased Pop Music as a collection of disparate genres, most of them three-minute guitar-based songs with a verse-chorus-verse format. Country, jazz vocals, oldies, punk, indie–the long arms of Pop Music embrace all of these. But in Sad 13 there were zero nonvocal jazz tracks, zero “world music” songs and a mere two classical works (by Beethoven and Mozart).

We did have one CD that might qualify as minimalist avant-garde, because it appeared to contain many minutes of silence. We chalk this up, however, to a failure of CD-burning technology rather than a calculated risk assumed by its creator. (“What is sadder than sad? Nothing! I’ll make my CD full of nothing!”)

Artists appearing on Sad 13 mixes ranged from big-hair rockers Poison to 300-pound Hawaiian guitarist Israel Kamakawiwo’ole. Contestant Ronnie McCullough’s CD contained songs performed only by women (save a cameo by Ralph Stanley); Todd Inoue (music editor of Bohemian sister paper Metro Silicon Valley, and therefore disqualified) leaned toward hip-hop and was the only one to include Ice Cube’s “Dead Homiez”; Kelly S. O’Rourke selected mainly from a pool of current indie rock bands; Eric Mooney, a self-confessed “child of the ’60s,” offered a cassette tape featuring folk and rock songs of the era that had touched him during his lifetime.

Eventually, patterns emerged. Elvis, the Smiths, the Beatles, and post-Beatles George Harrison each had several songs represented multiple times. But it is Johnny Cash who reigns king in the land of Sad 13. Cash-crooned tunes showed up on 10 of the 35 total entries. Of those 10, four included his cover of Nine Inch Nails’ “Hurt.” In fact, Gary Jules’ “Mad World,” Harry Nilsson’s “Without You” and John Lennon’s “Mother” would be tied with “Hurt” for Most Frequently Chosen Sad 13 Song, were it not for contestant Amy Quinn, who put the original Nine Inch Nails version of “Hurt” on her disc.

But in the final analysis, A. Eden’s Sad 13 Challenge CD won because it made us sadder than any other CD. We debated that its exclusive focus on songs of the ’50s and ’60s–several of which were audibly transcribed to digital format from vinyl–was perhaps a bit gimmicky, but the tears forming in the corners of our eyes told us differently.

The smooth but strong sadness of this CD made me want to find a pitiful dive and, through the debilitating power of imbibing many stiff drinks well into the wee hours, slowly allow myself and the barstool to merge into one entity. It made me sad all over again for the breakups and disappointments and expired happiness of my own lifetime, as well as the lifetimes of others. Here is A. Eden’s winning playlist:

The winner of our contest could easily be the loser in another Sad 13 Challenge held by another paper in another location; a CD that did not move the Bohemian‘s Sad 13 judges could unleash a torrent of weepy emotion from another group of listeners. We thank the 35 readers who sent us a little piece of their heart and making our world sadder and more beautiful.

Spitting the Real: Common allows himself to feel regret and vulnerability on ‘Retrospect for Life.’

What is the hip-hop equivalent of ‘Cats in the Cradle’?

In hardcore rap, machismo is a guiding force, where showing feelings can be interpreted as a weakness and admitting sadness or regret can be a fatal flaw for an opponent to exploit. Maybe that’s why many rappers strap on a screwface like body armor. “Nobody likes me and that’s OK,” rapped 50 Cent in an early mixtape appearance. After this quick admission of vulnerability, he proceeds to blast on haters, free from woe’s restrictive grasp.

For a genre known for emotional outbursts, sadness should be a welcome topic of exploration among MCs. As the body count began piling up, new feelings began to emerge: regret, vulnerability, confusion and “is there a better place for me?”.

Embracing the ideal of loss lead to some of genre’s strongest moments. Yet perusing Sad 13 Challenge lists, I saw that I was the only one to include hip-hoppers. I don’t know whether that hints at a generational divide or just the demographic makeup (and resulting tastes) of Bohemian readers. Truth is, there are plenty of rap songs out there that pack the emotional wallop of Elliot Smith or Hank Williams. Here’s a couple.

“Retrospect For Life” – Common w/Lauryn Hill
Common’s meditation on abortion is personal and poignant without coming across didactic. The embryo removed, Common wonders how much of his identity was sucked away during the procedure. “I’m sorry for taking your first breath, first step and first cry but I wasn’t prepared mentally or financially,” he raps in one line. And with Lauryn Hill singing an interpolation of Stevie Wonder’s “Never Dreamed You’d Leave in Summer” on the hook, this is a profoundly sad song that begs for a reconciliation that never comes. All that’s left is the afterimage of regret. “Next time, I’ll use self control instead of birth control because $315 ain’t worth your soul.”

“All That I Got Is You” – Ghostface Killah w/Mary J. Blige
Abandonment, poverty, roaches in the cereal box, urine-stained mattresses, siblings with birth defects–it’s all there as Ghostface keens over his tough childhood. Similar in strata to “Retrospect,” “All That I Got Is You” is bare emotion with an R&B diva on the hook to drive the point home. The point being: shit ain’t sweet when you’re poor. Mary J. Blige serves as a hopeful ray of sunshine swirled in strings of hope.

“Ex-Factor” – Lauryn Hill
A mournful Hill dissects a relationship going nowhere. Her plaintive cries for an explanation passes through various stages of grief to arrive at the musty core of a love gone rotten.

“Dead Homiez” – Ice Cube
In a foreshadow of his success on the silver screen, Cube delivers a measured eulogy to fallen comrades without shedding a tear. Over a classic funk bed, Cube exposes the confusion of mourning. “They say ‘Be strong’ and you’re trying/ But how strong can you be when you see your pop’s crying?”

“Who Falls Apart” – The Nonce
One of rap’s most depressing songs came from the Los Angeles underground by one of its most slept-on denizens, the Nonce. “Who Falls Apart” is about the shadiness of the music business and why good rap groups don’t stick around.

“Stan” – Eminem
Em’s narrative told through the perspective of an obsessed fan accelerates in hysterics and showed his critics how complex and amazing a storyteller he can be. The rainstorm effects and Dido sample add to the dark, surreal nature.

“Ice” – Buck 65
Buck 65 recounts the agonizing aftermath of his mother’s fatal battle with breast cancer. “All my soul, my head, and aching tummy, why in the world was my mother taken from me.”

“Roses” – Kanye West
His grandmother in a coma, Kanye rushes to the hospital, reflecting upon the family’s matriarch and discovering that health care is a class issue. When he asks a nurse for help, she asks if he can sign some t-shirts.