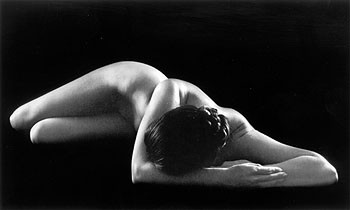 Bernhard had already been successfully supporting herself with her camera for years when she first spied Weston’s black-and-white study of this dinnertime thistle in 1935. Describing her chance meeting with him on a Santa Monica beach as “transformative,” Bernhard had an epiphanic understanding that she too could access this slide from the commercial to the artful. “On that day,” she recounts in Illuminations, a documentary film about her work, “I became a photographer.” She moved from New York to California to study under Weston, titled her next piece Creation, and from this new start her real creations began.

“That artichoke had the essence of life,” she says, a German accent still flavoring her speech after 71 years in the United States. “And Edward was wonderful with vegetables. It has to do with passion and intensity. It’s normal for me to bring an intensity and passion to my own work, that’s why I’m a photographer.” A nephew comes smiling forward from the crowd. “That’s a Bernhard!” she says proudly as she turns to greet him.

If she’s not talking much now, that’s OK because Bernhard has already completed a lifetime of smart conversation. Lauded almost as much for her work as a teacher as for her work as an artist, she is proud to have shepherded several generations of photographers from her home studio in San Francisco. Teaching classes in her living room, Bernhard was famous for insisting upon intuition and feeling above formal concerns. She also demanded that her students restrain their search for beauty within a one-block radius of their homes. “If they can’t find it there,” she says in Illuminations, “they won’t find it anywhere.”

Beauty is within easy reach of Bernhard’s chair at the Singer Gallery. Featuring her voluptuous black-and-white still lifes and nude studies (Ansel Adams once praised her as being the best photographer of the nude, period), the gallery’s back walls reflect a calm appreciation for the unclothed female form. A maverick in her use of nude models from as early as 1934, Bernhard’s figures are sometimes almost unrecognizable as human, their bodies transformed (as with Sand Dune) into a sinuous run of line and hip and waist and shoulder and nape limned with light and defined by shadow.

Acting with the authority of a sculptor when arranging her models, Bernhard favors hands above faces. “I feel that this makes the universality of the splendid anatomy more emphatic,” she explains in Ruth Bernhard: The Collection of Ginny Williams. While certainly concerned with bone and skin and the play of white and light, she nonetheless wreaks an ecstatic eroticism in her images that is rarely just objective. Wet Silk, for example, reveals a woman’s bare torso draped in the damp fabric, the silk dropping off one shoulder like a truncated arm. Rather than driving the boys at Hooters wild, it instead reflects the gorgeous dignity of the Venus de Milo.

“The most beautiful object is not beautiful unless the light reveals what is there,” Bernhard once said, and the revelation afforded by illumination has indeed been her life’s work, her Doorknob photograph being a tremendous case in point. The story goes that this glass knob, affixed to her garden gate, struck her one May morning for the riotous halo of refraction it displayed. She made a note to photograph it the next day around the same time. But revolving around the sun as we do, the knob refused to glow in just that way the following morning. Bernhard made a notation on her calendar and exactly one May later was at the ready when the knob did its annual ray-dance. This time she caught it, as is her preference, in one take.

Whether making photographs of minutely discerned seashells, LifeSavers stood on end, rain-soaked window screens, garden hoses fired with sun, sprays of straws, or a nude dancer lounging unconcernedly in an oversized cardboard box, one languid arm trailing (In the Box Horizontal), Bernhard’s images readily divine the magic between an artichoke and a thistle. She attributes her own thriving force and ability to discover and show to an ineffable curiosity and an adoration for every single thing on this good, green Earth.

In Illuminations, she merrily mouths her own epitaph. “She loved life–that’s how I’d like to be remembered,” she says. “I don’t care if I’m remembered for my photographs. I do love life–to the very last day.”

How lucky for us, then, that she chose to photograph. Because it shows.

‘Ruth Bernhard: The Body Eternal’ and ‘Nancy Wilson-Pajic: Falling Angels’ show through May 4 at the Barry Singer Gallery. 7 Western Ave., Petaluma. Gallery hours are Tuesday-Saturday, 11am to 6pm. Free. 707.781.3200.