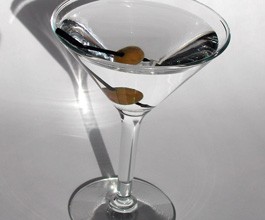 It was Marlene Dietrich who defined the trouble with the overfussy cocktail: “Bad for you, and trouble for the bartender.” Bernard DeVoto, author of the recently rereprinted The Hour: A Cocktail Manifesto (Tin House Books; $16.95), would have agreed. DeVoto was a noted figure in 20th-century letters; he edited Louis and Clark’s journals and oversaw the release of that masterpiece of posthumous atheism, Mark Twain’s Letters from the Earth. This knowledge of American history gives weight to the prediction the rum-despising DeVoto made when this book was first published in 1948: “If the Republic ever comes crashing down, the ruin will have been wrought by this lust for sweet drinks.”

Beneath the eloquence, what DeVoto ultimately pulls for is a well-made martini shaken with lots of ice, or simply “a slug of whiskey.” It’s bourbon that DeVoto praises the most highly, and its lighter cousin rye, as American as the Washington monument and far more useful. One feels it’s a patriotic duty to purchase some Maker’s Mark or Bulliet to consume when imbibing DeVoto’s prose about the power of positive drinking: “In England they call for a division, and the ministry falls; in Russia, they shoot a thousand commissars; but in freedom’s land, they recess, speak the hallowed words of Daniel Webster and Henry Clay, and send out for a statesman’s standby and some soda. Strife ceases, the middle way is found, the bill gets passed, and none shall break our union.”

If that passage doesn’t drive you to drink, perhaps you share the spirit of the Lemonade Lucys who infest D.C. now: far less bibulous than the old days, but far more fractious.