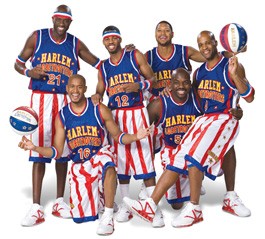 So Gilligan’s Island was, like, a super weird show, right? It was never remotely plausible, and never even actually that funny, but totally rad when you’re eight years old, like I was when the show’s writers went completely over the deep end with the bizarrely premised 1981 made-for-TV movie Harlem Globetrotters on Gilligan’s Island.

The plot begins when the Globetrotters experience engine trouble as they fly somewhere over the Pacific—probably on their way to one of the 220 cities where the team of wily basketballers have graced the court over the past 85 years. They land on Gilligan’s island, where the seven castaways have returned after finding themselves unable to integrate back into normal society (or apparently find a change of clothes). Their resort is called the Castaways, and all is peachy until an evil corporate raider in a yacht captain’s hat tries to steal away ownership of the island so that he can gain access to a mother lode of valuable ore. The Globetrotters show up just in time to save the Castaways vacation resort by winning a nail-biting basketball game—narrated by legendary Los Angeles Lakers announcer Chick Hearn—against a team of large grey robots with blockheads, and thus foil all plans for domination of the island by the evil capitalist creeps.

Years after saving the island, the legendary Harlem Globetrotters are still on tour—spinning basketballs on their fingertips, executing unbelievable trick shots and making an appearance Jan. 12 at Santa Rosa Junior College. The 2011 tour is sponsored by a motley group of advertisers including Campbell Soup, Howard Johnson Hotels and the Greyhound Bus Line (a cross-section that hopefully doesn’t paint a portrait of what life on the road is like for a Globetrotter these days).

Check out the antics of the Castaway’s conquering heroes during the local stop of their 4 Times the Fun world tour when the Harlem Globetrotters strut their stuff on Wednesday, Jan. 12, at Santa Rosa Junior College’s Haehl Pavilion. 1501 Mendocino Ave., Santa Rosa. 7pm. $27. www.harlemglobetrotters.com.