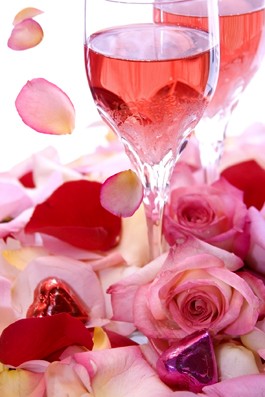 Rosés are pink, white Zin is through, dry's the new sweet and so are a few

Does It Get More Prosaic Than This?: Whatever. (Dry is the new sweet.)

When millions of people esteem a wine as being little better than white Zinfandel, its career is over.

Or is it? Rosés are coming back, recovering from their plight of a long and lingering association with that candy-sweet Zin juice that has turned so many away from all things pink. The resurgence of rosé comes as a healthy symptom of America’s eagerness to drink new beverages and explore new flavors, especially drier ones. It also derives from an understanding among mature appreciators that it’s the wines you enjoy, not those that marketers tell you are good, that are worth drinking.

Still, many wine drinkers will not buy just any pink wine. Bill Arbios, owner and winemaker at Santa Rosa’s Arbios Cellars, notes that consumers are taking a fresh interest in dry—not sweet—rosés, which may serve as standalone table wines and can go well with many foods.

“Rather than the soda pop white Zinfandel style, people are looking for a wine with greater character, drier—a French-style rosé,” he explains. “The evolving palate is looking for something drier than the traditional rosé, and a lot of sweet table wines are suffering.”

Other winemakers agree: The trend toward dry rosé popularity follows the natural tendency in the evolution of the human palate to start with the simple and the sweet and advance from there as our intellects seek something greater.

“However,” notes Clos du Bois winemaker Erik Olsen, “the flip side is that as wine consumers mature, they become more comfortable with what they really like, and it’s OK to like sweeter wines like Rieslings. For newcomers to wine, a dry rosé may be difficult to appreciate.”

Georgetta Dane, winemaker at Big House Winery in Soledad, believes that white Zinfandel has gotten a bad rap. It’s white Zin, after all, that has been and still is a great boon to the wine industry.

“Many people begin with white Zinfandel, since it’s an entry-level wine,” Dane says. “Then, once the palate is established and has matured to where it prefers red wine, some people turn back and try rosés again, because they’re not all light and simplified. Our Big House Pink uses between 10 and 15 grape varietals, and it’s a very complex wine.”

White Zinfandel’s lasting popularity attests to its enduring importance as a gateway wine. Ironically, that same pink juice could be the greatest future adversary of dry rosés in America, says Olsen, who feels that dry rosés share a market encouraging enough to keep the pink wine coming yet slow enough that reds and whites may always dominate our tables.

“I think it will take a long time before dry rosé consumption in America matches that in Europe, simply because white Zinfandel has a stigma and is viewed as less sophisticated,” he says.

But the knowledgeable drinker does not consider all sweet wines to be inferior. Dessert wines like port styles and other after-dinner drinks have always held repute in the wine trade. While dessert winemaker Andrew Quady of Quady Winery in Madera has observed port-style wine sales trend downward over the years, he believes it’s only due to diners steering clear of strong after-dinner drinks before driving home. In other words, famously sweet wines like vintage ports, Madeiras and Australian “stickies” are delicacies, and for winemakers, they’re a serious art form. It’s the medium-sweet wines like the white Zins that lack character and depth, Quady says.

Marco Cappelli, a consulting winemaker based in the Sierra foothills who specializes in dessert wines, agrees; ice wines, port styles, muscats and the like fall into a category of sweetness all their own—no white Zinfandel allowed.

“The white Zin styles that were common in the ’80s and ’90s were like soda pop: fruity, low alcohol, slightly spritzy and sweet,” Cappelli recounts.” They introduced wine to many, many new drinkers. The problem is that they remained too sweet, and as palates continued to develop, [wine drinkers] moved on to drier styles.”

But, he adds, even sophisticated dry wines often contain a furtive addition of sugar. Cappelli says that many winemakers (it’s really no secret among those in the business) supplement their dry wines with unfermented grape juice as a subtle, virtually undetectable sweetener. Though the sugar addition in such wines does not add sweetness that is recognizable, it does bring out flavor and body much the same way that salt enhances a bowl of oatmeal.

“Often the sweetness is below the sensory threshold, in the 0.2 to 0.5 percent range, so the wines don’t actually taste sweet,” Cappelli says, “but the sugar makes them rounder and softer than they would have been if they were left dry, like adding a teaspoon of sugar to the spaghetti sauce. These wines fool even the best of palates.”

Cappelli adds that some wineries thrive by selling a perception of cleanliness, expert craftsmanship and purity. “If people were to find out that a high-end winery in Napa was adding sugar to their wine, it would lessen their image.”

In the realm of dry wines, sugar is bad and sweet is cheap, and particularly with rosés, an association with such elements can be fatal to the success of the label. Clos du Bois’ Olsen points out that supermarkets and wine shops often include a “dry” rosé section to accommodate blush wines far away from the white Zinfandel shelf. In fact, white Zin sales are on the decline for the first time, according to the annual wine market report from the Nielsen Company, while dry rosés are succeeding. Sales of the latter costing more than $6.50 increased by 23 percent from 2005 to 2006, and in the first half of 2007, rosé sales rocketed up 39 percent.

Still, reds and whites make up over 99 percent of the $28 billion American wine industry, and many winemakers are wary of the temptation to follow the current trend, slight as it actually is, toward rosé consumption. Rod Berglund, owner and winemaker at Forestville’s Joseph Swan Vineyards, for one, produces a pink wine by the name of Naked Lady. But 2007’s version, he says, is even better than he wanted it to be; the season’s fruit, he explains, was splendid, and there’s just no sense in dedicating excellent grapes to a pink wine.

“When grape prices are high, you really don’t want to make something that you could otherwise be selling for red-wine prices,” Berglund explains. After all, many drinkers are still reluctant to pay much more than 15 bucks for a rosé. Studies in recent years have demonstrated that, on average, experimental drinkers looking for a good rosé search in the $10 to $12 range, and anything too close to $20 is more than they’re willing to dish out on a wine that bears such a visual resemblance to a Sex on the Beach cocktail—even on Valentine’s Day

(On a personal note, I can imagine almost nothing more fearsome than a tsunami of pink wine barreling down my street, but in a figurative sense, that’s just what’s happening in the American market as winemakers step up production to meet the demand.)

For years, Joseph Swan produced a rosé from, well, Zinfandel, and then turned off production for 10 years before Berglund and his wife, Lynn, introduced the Syrah-based Naked Lady in 2006. Numerous other wineries have recently welcomed rosés to their repertoires as well. After a production lapse of several years, Arbios has released a crisp dry rosé under the name Praxis, due on shelves in about a month.

Sonoma’s Clos du Bois Winery has also begun production of rosé in answer to the consumer demand. The wine, first made in 2006, is bright, fresh, dry and fruity—what winemaker Erik Olsen considers to be distinctly French in style. Pietra Santa’s 2006 Rosato, from the Cienega Valley, is an Italian rosé of 100 percent Sangiovese. First made in 2003, the Rosato is a far and echoing cry from your classic white Zin. It features light fruit flavors and a delicious crispy limestone character that winemaker Alessio Carli attributes to unique mineral deposits underfoot at the estate.

It’s very good. I tried it. It’s better than any white Zin, though I’m still not sure that it beats sex on a beach.