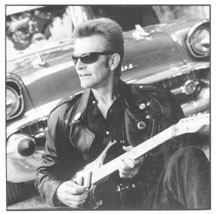 Rock on: Rockabilly idol Ronnie Dawson is on the comeback.

Ronnie Dawson’s got the beat

I THINK I HEARD something in music that nobody else around me heard,” says rockabilly legend Ronnie Dawson, describing his fascination with music as a kid in Waxahachie, Texas. “Being around it and having a father who had his own swing band certainly didn’t hurt my enthusiasm at all. But I remember it really happening when I was at a Pentecostal church. Dad had taken his bass to church and was playing up on the platform. I went up there and started to beat on the arm of the preacher’s chair.

“That’s when it bit me really bad.”

Thanks to Dawson, 57, a lot of other folks have been bitten by the rockabilly bug. His edgy hillbilly rock has inspired a horde of latter-day sinners, including the Rev. Horton Heat, the Cramps, Big Sandy and the Flyrite Boys, and Southern Culture on the Skids.

As a blonde flat-topped teen, guitarist and singer Dawson had regional hits with “Action Packed” and “Rockin’ Bones.” Rock impresario Dick Clark signed Dawson–who upstaged Elvis Presley in 1955 at the Big D Jamboree in Dallas–to his own fledgling label. Stardom was within his grasp when the ’50s payola scandal rocked the music industry, toppling DJ Alan Freed and discouraging Clark from promoting his own acts on his popular “American Bandstand” show. Clark dropped Dawson. The young Texan was crushed, but remained fiercely faithful to rockabilly.

Then, in 1995, he blew the roof off of the Late Night with Conan O’Brien TV show with an explosive set that drew attention in the music industry. Earlier this year, Crystal Clear Records, a small Texas indie label, released Monkey Beat!, recorded 10 years ago in England. Dawson’s most recent CD, Just Rockin’ and Rollin’ (Upstart/Rounder), is a wild drive through high-octane, guitar-driven roots rock, featuring guest guitarist Eddie Angel of Los Straitjackets, among others.

Later this month, Crystal Clear will release a two-CD set of vintage Dawson rockers that should set fire to more than a few stereos.

But just don’t call it a comeback.

“I’ve taken some slowdowns, here and there,” he says in a soft, Texas drawl, during a phone interview from a Tucson resort hotel, “going into different types of things.”

After the Dick Clark deal collapsed, Dawson disappeared from the national limelight, but continued to perform and record, releasing records for Columbia Records under the moniker Snake Munroe and Commonwealth Jones, and working as a session drummer on Paul and Paula’s cuddly ’60s pop hit “Hey, Paula.”

Between 1975 and 1982, Dawson had a real long slowdown. To pay the bills, he recorded commercial jingles for Hungry Jack pancakes and others. “You can’t really get your musical jones taken care of playing jingles,” he laughs, “but you can keep the wolf away from the door and still stay at least on the fringes of the business.”

In 1987, British record collector Barney Koumis phoned Dawson to say that a couple of his old songs had become cult classics among British rockabilly buffs. He agreed to reissue them as the Rockin’ Bones (No Hit Records) compilation, establishing Dawson as the keeper of the rockabilly torch.

The retro-rock scene had caught up with Blonde Bomber.

“This music is timeless, man,” he offers. “It just kind of takes its dips every now and then. But the secret is that when really good bands come along–like Big Sandy–you get that good buzz going and people get excited about it.”

These days, Dawson isn’t getting rich, but he is getting the national exposure denied him so long ago. “I don’t require a whole lot of money,” says Dawson, whose Dallas apartment is furnished with little more than a mattress on the floor and a small bookshelf. “I just never really worried about things like that. Things just kind of seem to take care of themselves.”

Pleasing his fans is reward enough, he adds. “You know, there’s a song that was written for me called ‘It Wouldn’t Do No Good’ that has a lyric that goes, ‘Drivin’ in my car from place to place, I know I’m doin’ right when I see a happy face.’ That kind of says it all. It’s hard to describe in words, but sometimes you get on the road and travel 500 miles and your hotel might be shitty–I mean, we lucked out really good this week, but it’s not always that way–and you forget about how good it can be. You know, it can go to the other end of the stick. And you say, ‘God almighty, why the hell am I doin’ this?’

“But just about the time you start to think like that, you have a dynamite show; people are smiling and thanking you for coming. God, there’s nothing like it!”

From the September 5-11, 1996 issue of the Sonoma Independent