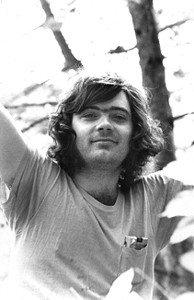 I used to own Roky Erickson’s haunted TV set. Erickson, the father of psychedelic garage rock, was living in Novato at the time. His wife thought it would be good for Roky to have company. It seems he used to sit in his darkened bedroom, windows covered by blankets, watching that TV and convincing himself that he was an alien visited by demons.

Best known for his affiliation with the seminal psychedelic band the 13th Floor Elevators, whose 1966 garage-rock classic “You’re Gonna Miss Me” (which featured an electric jug) rose to No. 59 on the pop charts, Erickson formed a new band, Roky Erickson and Bleib Alien, in the late ’70s, even performing one stiflingly hot night at the cramped River City nightclub in Fairfax.

Years before, he’d spent a long hot summer in Hedgecroft Hospital in Houston, where doctors administered electroshock therapy. During his stay he would write poetry about God, the devil and the nature of love, poems that later fed his lyrics. By the time I began keeping him company, he’d just spent three and a half years in Rusk State Hospital for the Criminally Insane in Austin, Texas, after a marijuana bust for one joint. He was diagnosed as a schizophrenic and given mind-numbing meds. He’d come out a bit twisted.

Then I showed up with some exotic herbs.

High doses of THC might not have been the best thing for a guy known for legendary bouts with madness and mythic drug abuse. I don’t know if he really was a nut; he tried hard to freak me out during my visits, but I could see the humor, innocence and charm that lay deep within him. I looked forward to those visits, and we hit it off.

In 1979 he moved back to his Texas hometown, giving me his treasured old Sears color console TV. A few weeks later, Erickson was back in the hands of the cops. He reemerged in 1986 with the single “Don’t Slander Me/Starry Eyes” before fading away again. Seems he’d become obsessed with mail-order catalogs and had stolen a bunch of them from his neighbors. The U.S. Postal Inspector had him institutionalized again. He got sprung just a couple of weeks after the 1990 release of the all-star project Where the Pyramid Meets the Eye: A Tribute to Roky Erickson, which featured covers by REM, ZZ Top, the Butthole Surfers, Bongwater and the toast of the neo-psych contingent (Richard Lloyd of Television, Primal Scream, Thin White Rope and the Jesus and Mary Chain).

Erickson’s rocky road is again chronicled on a new two-CD collection, Roky Erickson: I Have Always Been Here Before (Shout! Factory), spanning 30 years, from the pre-Elevators band the Spades through 1995’s “I’m Gonna Free Her.” The strength of this consistently engaging material underscores the tragedy that Erickson’s insanity and run-ins with the law have overshadowed his standing as one of rock’s true originals. Just check out the remarkable swamp blues of 1985’s “Don’t Slander Me” or, better yet, the country-inflected “You Don’t Love Me Yet” to see how much of an influence Erickson had on Uncle Tupelo and other alt-country bands.

But it’s the psychedelic material that he’s best known for. After all, the Beatles were still months away from the groundbreaking psychedelia of their Revolver album, and more than a year away from Sgt. Pepper’s, and the Grateful Dead were just settling into the Haight-Ashbury district when “You’re Gonna Miss Me” was climbing the national charts.

The authorities certainly contributed to Erickson’s mental illness, but they never did break him. Songs like “Anthem (I Promise)” and “Warning (Social and Social-Political Injustices)” are powerful and defiant indictments of the repression Erickson endured while institutionalized.

These days, he’s reportedly holding his own. He goes out to dinner with friends once a week, collects a small Social Security stipend and proceeds from the Shout! Factory CDs are going toward a trust for his care. Meanwhile, his music is never far away. “You’re Gonna Miss Me” was the opening song to the film High Fidelity, introducing the audience to self-absorbed heart-broken record-store owner Rob Gordon.

As for that old television set, it wasn’t really haunted. But it did have the damnedest knack for ghosting and producing seemingly random audio tracks. The visuals of Walt Disney’s That Darn Cat, for instance, would mix with the audio to a creepy Vincent Price horror movie in a most surreal fashion that gives some insight into why Erickson may have thought he was communicating with demons from some dark abyss.

It’s reported that he still keeps several TVs and radios going simultaneously. Those collective voices might just be telling him something we need to know.