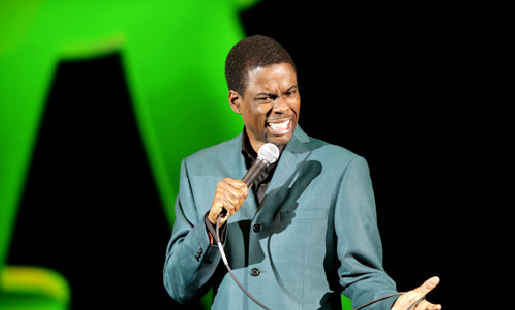 Stand-up comedy genius (and film actor with poor judgment) Chris Rock brought his No Apologies tour to Oakland’s Paramount Theater over the weekend, with four sold-out nights that sadly showed the fallibility of the modern-day Mark Twain.

Momentum was high following a solid set from regular opener Mario Joyner and a powerful slide show of African-American art from the likes of Kehinde Wiley and Basquiat. Rock was introduced via a fast-paced montage of news clips and sound bites featuring many of his impending targets, an appropriate segue considering Rock is a topical artist in the best sense. But his opening riff on one Ms. Spears was immediately tiresome considering her recent overexposure; it seemed distasteful at this point, even though he was actually defending her. “So they take her kids,” he said in his trademark grit, “but Bobby and Whitney keep theirs?! Even O.J. kept his kids, and he killed their mother!”

Still, Rock has a knack for finding gold in already exhausted territories, as evinced by a brilliant 30-minute bit on the current presidential candidates. “So if Hillary wins, she’s going to work every day in the same office where her husband got a blow job,” he said amid a sea of side-splitting shrieks. “There ain’t enough redecorating in the world to get rid of that!”

Rock also had fun with his choice Obama, using the candidate’s status as a reminder of how hard it still is to be a black man in America. “Until a black man ran for president,” he said, “I’d never heard of a ‘super delegate!’” His jokes still worked, although they were a little too respectful: “He’s got the blackest name next to Dkembe Motumbo!”

Not squandering much time on McCain beyond a couple of jokes (“Do we really want a president with a ‘bucket list’?” / “I don’t want to vote for someone who got captured; I want to vote for someone who got away!”), Rock knew that digs at Bush would go over much better. “He fucked up so bad, he made it hard for a white man to run for president!” he said early on. “No one gives less of a fuck than Bush,” he continued. “If you were hanging off a cliff and all you needed was someone to give a fuck, and Bush was at the top with a pocket full of fucks…”

And so went the nearly two-hour set of his trademark blend of socioeconomic concerns, the state of the union, and painfully honest & spot-on relationship wisdom. But although he still outshines virtually every other working stand-up comedian, Rock’s material failed to fully incite the Saturday night crowd, even though a good portion had already gotten their swerve at least halfway on.

One might think the large venue had a hand in the restrained reaction, but large venues are nothing new to Rock (his best TV special was filmed at the Apollo). More damaging was the derivative material, recycled from his past glories. When talking again about getting caught cheating, the previous “left turn” became the highway (“Did you take the highway with that bitch? Only side streets from now on!”). Marion Barry’s drug habit became Obama’s very “black-sounding” name (“President? It’s hard to become a manager at Burger King with that name!”). He used Obama’s reverend-speech controversy to reiterate how old black men are justifiably the most racist people, and some punch lines were repeated verbatim: “I haven’t seen white people that mad since they canceled M*A*S*H.”

What’s most upsetting about this use of “regular bits” to which many comedians adhere is that not since Eddie Murphy (Delirious, Raw) has a comedian had such universally celebrated, instantly classic, entirely quotable comedy specials. Bring the Pain (1996) and Bigger and Blacker (1999) have endured and entered the pop culture lexicon, becoming more like perfectly paced one-man plays than hour-plus stand-up sets. They continually persist as must-sees for comedy fans everywhere despite their rapidly aging subject matter. It seems naive of Rock to think that his fans wouldn’t remember, or would want to hear anything but new material.

Like on 2004’s substandard Never Scared, Rock’s current subject matter is as bold as ever, christening forefather-decorated dollar bills as “rapist trading cards”, for instance. But his delivery is not as hard-hitting, never warranting a microphone smack as it did in Bring the Pain. Pacing – always vital for such scripted shows – was also a problem, with Saturday’s show scattered and meandering in places. Even the relatively tame Never Scared was sufficiently kinetic when it came to the Bay Area early into his 2004 tour.

Maybe his success (see the live video clip below) or his age has spoiled him a bit. Surely it’s not easy to hit a grand slam each time out, but it’s hard not to think that Rock’s questionable film script-reading skills have extended to his live shows. Although he’s already been on the road for a couple of months, No Apologies is still obviously a work in progress, with the comedian even admitting half-successful delivery at a couple of points on Saturday. But this is a sign of hope that the HBO special that airs this fall will be worthy of his and his co-writers’ formidable CV. There’s still a killer show buried beneath the shit, so no apologies are necessary, Chris – just some careful editing.–David Sason