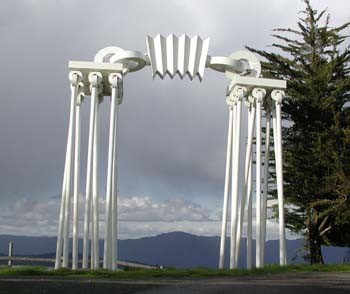 Top of the World: Ellison’s ‘Arch’ frames the view.

Getting lost on the way to interview artists at their studios is always part of the fun. It’s easy to tell when, for example, after some vicious time spent driving pointlessly through rural Sebastopol, one has arrived at musician Johnny Otis’ house: his name is emblazoned in cursive metal script across the driveway gates.

Getting viciously lost on rural roads on the way to sculptor Robert Ellison’s home studio, on the other hand, provides chance jack rabbit encounters and views of the blonde, rolling Cotati hillsides and the massive white steel Arch (shown above) as assurance that one has finally, thank goodness, arrived.

With its instantly recognizable style, Ellison’s Arch may as well spell his name out in cursive metal script. This is undeniably his place. Huge steel sculptures–one resembling a piece of Swiss cheese with macaroni stuck through the holes, another an oversized metal cigarette stubbed out to the ground–are rather carelessly placed around the hilltop property. Heavy cacti bearing prickly pears protect two handmade greenhouses containing troves of unusual African succulents. Several, perhaps a thousand, rottweilers bark anxiously at a new arrival from their enclosed run.

Meanwhile, the artist rides merrily by on an industrial forklift, accompanied by his studio assistant, 18-year-old James Christianson. They’re currently working on a massive, perforated steel deck for a wealthy family in the South Bay, the kind of family who can afford to hire a nationally known sculptor, one who specializes in those civic monuments that mark and personalize public places, to make their outdoor flooring. Retrieving a heavy steel sawhorse, Ellison admits the irony.

“There aren’t too many places outfitted to do this kind of work,” he says modestly.

“This kind of work” is much more than artful decking. Ellison, 58, is one of just a handful of artists whose work is primarily constructed to serve the public. Specializing in massive monumental works that help to shape and define civic spaces, Ellison has some 20 oversized sculptures on permanent display in the Bay Area and a U.S. map filled with other commissions. A display of his maquettes–small, brightly painted fiberglass models used to illustrate on a tiny scale the huge promise of the finished work–titled “Robert Ellison: Civic Concepts, Model to Monument,” are on exhibit at the Cultural Arts Council of Sonoma County’s public gallery through Aug. 12. Ellison will give two lectures on his art before the exhibition’s end.

Characterized by rounded shapes and such whimsical features as wordplay, scissors, soccer balls or floating figures, Ellison’s steel artworks are conceptualized in committee. The most ordinary return his name evokes on an Internet search are letters to the editors of regional publications complaining about his latest proposal.

While some artists, like Christo and Jeanne-Claude, seem to crave the achingly slow bureaucratic morass of decision by many, Ellison is merely sanguine. “The more information I can get from the people who are going to be using the art, the happier they are,” he says, now off the forklift and standing in the airplane hangar-sized building that serves as his studio on the ground floor and home above. He smiles. “It’s just much easier to go to a bunch of meetings.”

Which is not to say that the end result is predictable. Ellison, who is tall and professorial with the outdoor air of a professional contractor, is also the kind of man who plays a quick game of peek-a-boo behind a pillar in the CACSC’s gallery before being greeted. Perhaps the only predictable quality about his work is that it, like its creator, will be playful.

Standing in his studio, Ellison grins broadly. “If you commission me to do a piece,” he assures, “you don’t know what you’re going to get.”