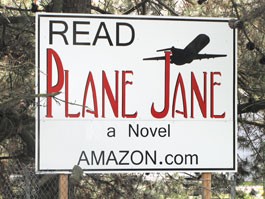 Cruising south on Highway 101, cars whiz by billboards advertising loans and mortgages, medical marijuana consultants and weight-loss programs. But just before southern Santa Rosa’s Todd Road exit, oddly tucked beneath redwood trees, stands a diminutive billboard with red lettering and a small airplane stating, “READ PLANE JANE, a Novel.” With just enough time to catch its message, the sign is intriguing enough to seduce passersby into wondering what kind of author would launch such a weird, and in this day and age, novel advertising campaign for his book.

“This was a harebrained idea I put together,” says Santa Rosa resident Bob Fischer, author of Plane Jane (Martin Pearl Publishing; $14). “There’s no way of measuring success because there’s no way to know if readers bought the book because of the billboards or because they saw it on Amazon.”

Still, from local responses and a notable spike in Amazon sales after the billboards went up, Fischer guesstimates that maybe 10 percent of the 6,000 books he’s sold so far are a result of the signs. Inspired by the old Burma Shave billboards of the ’30s, the two-billboard campaign (the second is located at the downtown Santa Rosa—Davis Street exit) took multiple phone calls and $4,000 to become a reality.

“Being able to get a location on the freeway was a miracle; it was very tough to do,” Fischer says. Caltrans estimates that 250,000 cars travel the 101 corridor through Sonoma County each day. Wanting to tap into the potential market of this captive audience, Fischer perused records in the Sonoma County Recorder’s Office, looking for landowners between Cloverdale and Marin County along the 101.

“I called 40 to 50 owners before I found one who would let me post my sign,” he says wearily. He kept the design and message simple for easy readability from a car flying by at 60 miles per hour. “People are attracted to things they can understand in one sentence,” Fischer explains.

Plane Jane is loosely based on Fischer’s experiences, and that of a real woman, Air Force fighter pilot Martha McSally, who was stationed in Saudi Arabia during Operation Desert Storm. Even though she was a lieutenant colonel, Air Force officials required McSally to wear a burka off base, which she refused to do on grounds of discrimination. The Washington Post leaked the story, bringing embarrassment to the Air Force, which quietly responded by honorably discharging her.

Fischer’s lead character, Mary Jane, is an ex&–Air Force fighter pilot, discharged under the same conditions as McSally. Jane now functions as a repo woman, reclaiming luxury jets from Saudi princes and South American heads of drug cartels, who either steal the aircraft or renege on their payments.

Fischer sold desalination equipment in Saudi Arabia in the ’70s and ’80s, and knows what the women there endure. He adds that bribes are a common way to do business in Saudi Arabia, but if discovered by U.S. officials, are a sure way to get arrested.

“The Saudis’ solution was to do business on airplanes, solely using cash,” he remembers. “Then they’d drop you off with a bag of goodies wherever you wanted, and away you went. This is absolutely factual,” Fischer emphasizes.

Fischer weaves his myriad experiences into Plane Jane, and is currently writing a sequel. But due to the fact that his billboards are technically illegal (existing billboards are grandfathered into the “No roadside advertising” program spearheaded by Ladybird Johnson in the ’60s), the Plane Jane campaign may disappear just like the Burma Shave signs, becoming another nostalgic novelty.