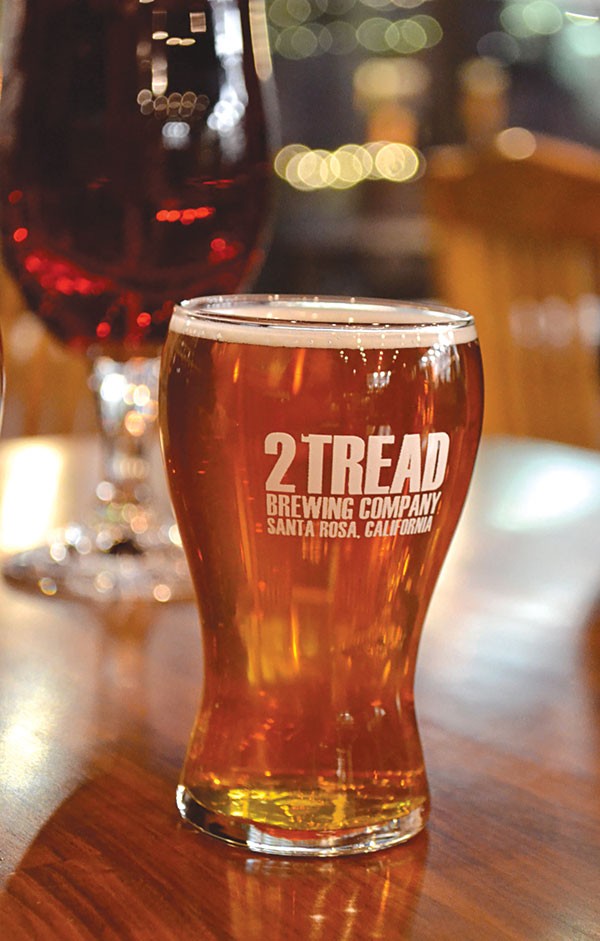 Open as of late September,
2 Tread had been scheduled for an April 2017 opening but was delayed by, among other things, recurrent rain (remember that?) that stymied patio construction. Set just inside the Santa Rosa Plaza, “between the hand and the rock,” as the company says, 2 Tread opens to the outdoors in a way that few businesses in the retail redoubt ever have—to Santa Rosa’s busy B Street, in this case, but it does afford easy access by bike (the tread thing—yes, it is a bike-themed brewpub). Serving as a whole section of the fence around the outdoor seating is a series of sturdy, metal loops to lock up to.

Better yet, just inside the door is a rare yet welcome sight for cyclists: a row of bike hooks installed on the wall. Riders can keep an eye on their gear when they’ve left the heavy bike lock at home to trim weight, which will come in handy considering the 32 ounces a couple of beers will add.

That house brew is only just now flowing from taps, says our server, who is friendly, prompt and helpful with the pub’s story so far. Brewer Christian August, who formerly brewed at Firestone Walker and founded 2 Tread with locals Bill Drury and Tracy Heydorn, is making batches titled “experimental,” instead of rushing to fill the menu with catchily titled brews, because every new brewery setup has unique characteristics that won’t duplicate ready-made recipes, according to the exacting brewer.

Other pours come from a roster of mostly local, mostly newer-on-the-scene breweries like Seismic and Barrel Brothers, and, like it or not, there’s a full bar of cocktails and booze available.

2 Tread’s Experimental Hoppy Pale Ale #1 ($5) was the best I tried for its fruity hop aroma and juicy, stone fruit flavor. Once the food was served, the grainy, dry and bitter-hopped, but less aromatic, Experimental IPA #2 ($5) made a better match with a 2 Tread Angus beef burger ($14), which was pretty tasty and comes with a choice of sides. Fries are thick-cut style and crisp; other entrées include pizza ($15), street tacos ($9) and small bites ($6). Compiling a list of the best fried shishito peppers, that now-ubiquitous trendy side, in the area? Yes, add this one to your list.

This story has been updated to reflect a correction.