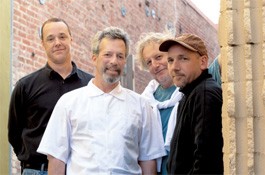 With arrival of the West County Grill, Sebastopol comes of age

Things have changed in Sebastopol. It’s got sushi bars and Michelin stars and some residents hankering for more urbane spots. Where, for instance, is a single person to go for a night out in Sebastopol? And for a town with so many centered people, where is the town center, the meeting spot, unless you care to count Whole Foods? But lo! A new venue, freshly painted green, is poised to open on the plaza in Sebastopol, a restaurant and bar in the former home of Lucy’s Cafe, calling itself West County Grill. Could it be the “Here!” to my “Where?” The West County Grill team think so.

According to partner Stephen Singer, the food you’ll encounter at West County will be wood-oven and grilled cooking with a Mediterranean/Italian bent inspired by the California emphasis on ingredients and simplicity of flavor. In speaking to the team, it’s clear that although they all have experience in high-end, groundbreaking restaurants, that’s not the angle here. They see a need for a more functional establishment that delivers what many in the area demand from the food they choose to eat: that it be organic, local, humane and full of innate flavor, both sophisticated and simple.

Singer is a managing partner, wine manager and the one who brought the possibility of the restaurant to light. He has been in the wine business for 30 years, starting with the shop he co-owned in San Francisco, Singer & Foy, and then as wine consultant for many Bay Area restaurants–including Chez Panisse, when he was married to Alice Waters. He’s a partner and consultant at several restaurants, including the popular tapas restaurant and bar Cesar. He has a specialty olive oil and wine-importing business and a demanding young vineyard in Sebastopol.

Former Lucy’s owners, Chloe and Jonathan Beard, are acquaintances of Singer’s. When he moved to Sebastopol from Berkeley several years ago, he says that he took note of the restaurant’s “good bones”–its high ceilings, beautiful pizza ovens and prime spot on the plaza. The Beards contacted Singer when they were ready to sell. Too busy to consider it himself, he in turn contacted his old friend and ex-partner, the New York celebrity chef Jonathan Waxman about the opportunity. But when Waxman asked Singer to be his partner, Singer saw the possibility of fulfilling a dream.

Waxman ran the kitchen of Chez Panisse in the late ’70s and was instrumental in introducing “California cuisine” to New York in the ’80s. In 1992, he partnered with Singer in a restaurant in Napa called Table 29 (where Bistro Don Giovanni is now). Later, he opened Washington Park and then Barbuto in Manhattan. Though he lives in New York, Waxman’s family is from Northern California; his grandparents were chicken farmers in Sebastopol. Singer says that Waxman is “extraordinarily conscious of the mechanics of a restaurant and is the single greatest influence on the development of [West County’s] physical space.”

Waxman has brought Darren McRonald on as head chef, an artist who also cut his teeth at Chez Panisse and later worked at Table 29 with Waxman and Singer. McRonald says of his training, “My head comes from Chez [Panisse] and my heart comes from Jonathan [Waxman].” Later, he worked again with Waxman at Washington Park. He says his style of cooking is “American,” meaning it borrows a little bit from everywhere, though his training is in French, Italian and Spanish cooking. When he was asked to join the team, he says he didn’t hesitate, because he never was a real “New York guy” anyway.

Singer, through mutual friends and his reputation, recruited Mike Hale, former owner-manager of the beloved Willowside Cafe in Santa Rosa and later the industrial-chic wood fired Manzanita in Healdsburg–both very popular and critically acclaimed. Hale will act as general manager (with 15-year right-hand-man Omar Perez as floor manager) and brings with him thorough insight into the area’s restaurant biz, a deep involvement with wine and a commitment to building a convivial atmosphere.

With this crew so connected to Chez Panisse and other fine, innovative restaurants, there’s little question that the ingredients and the cooking will be top notch and the wine list profound. Singer explains the team’s vision this way: “I want the restaurant to be great not only because of the great ingredients and cooking, but also as a gathering place, a social nexus. I’ve experienced restaurants in the past that have become something like a utility, a place people can depend on, Chez Panisse was like this for Alice [Waters] and me.”

About the food, Singer says, “the food concept is not elitist; the real quality will be visible in every way–how people are treated, the feeling of the environment. It’s not meant to be a place just for birthdays.” Hale agrees, saying that he doesn’t want the restaurant to be a place that tries to educate in an area where people already know so much about food. He sees West County as “a comfortable place where you’ll see people you know; not an intellectual exercise, but a warm, sensory experience.”

The ultimate plan is to serve lunch and dinner daily with a bar menu in effect after dinner until closing and brunch on weekends (appetites whetted by Sunday’s farmers market can be satisfied forthwith!). Initially, just dinner will be served five nights a week. There will be 50 to 60 counter seats, including 20-plus at the cocktail bar, more seats at the raw bar and the rest facing the open kitchen, plus a large communal “chef’s table,” regular dining tables and a private party room.

The former 6,000-square-foot Lucy’s space has been somewhat reapportioned. The architect Cass Calder Smith, who designed San Francisco’s Rose Pistola and Lulu restaurants, has let the impressive high ceilings, industrial brick walls and concrete floors of the 1920s brick building remain. The décor is intended to embody the West County spirit: unpretentious, earthy and ecologically sensitive with recycled materials used wherever possible. Calder Smith says that he sees the space as “a combination of the existing building with its semi-industrial character played off by the found objects of the county, such as the used windows, lumber and country furniture.”

Chef McRonald believes that an open kitchen creates trust between the cook and the patron, saying, “People need to know where their food is coming from.” He’s particularly keen on the raw bar and hopes others will share his enthusiasm for the local seafood. After working in New York where the ingredients come from so far afield, he says, “I’m really happy to be working right in the heart of such a hotspot of great local ingredients.”