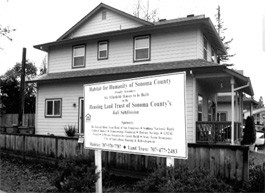 Ed Sotelo doesn’t like the way the media’s been describing opponents of a prospective Habitat for Humanity project in Marin. The group is proposing to build four three-bedroom homes in his Tiburon neighborhood. “They think we’re all a bunch of rich people who don’t want this in our backyard,” Sotelo complains. “Hell, I’m a working stiff myself.” Referring to the changes in Marin County real estate fortunes over the last half-century, he snorts, “I moved here 50 years ago.”

In fact, it is working folks who put in 500 hours of sweat equity, then buy and live in Habitat’s affordable and attractive houses, says Phillip Killbridge, executive director of San Francisco Habitat for Humanity overseeing the proposed project. “They’re teachers, they work as security officers, they work in your kids’ schools. This is workforce housing; this is housing for people who [want to] live and work in their community.”

For his part, Sotelo says he knows 17 widows in his neighborhood alone. None is wealthy and all are worried that the Habitat homes will harm their main asset: their property values.

Killbridge says that every single study done statewide shows that building affordable ownership housing does not hurt property prices. He adds that the four Habitat homes proposed for the .85 acre at the bottom of a 16.5-acre hilltop are being designed by the same award-winning architect who’s laying out the multimillion-dollar homes planned for the top.

Sotelo’s still worried, but Killbridge is patient. He’s been through this before. It’s a clash of perspectives, a friction between fears and dreams, as Habitat officials and other affordable-housing supporters throughout the North Bay work to find space for ordinary people who’ve been locked out of local home ownership by real estate prices that, despite a recent slow-down, are still way beyond the reach of average folks.

Potential buyers must earn 40 percent to 60 percent of the local median income, which in Marin translates to a maximum of $55,000 for a family of four. Buyers provide sweat equity, usually 500 hours or more. In exchange they get a no-interest mortgage on a house with resale restrictions that ensure it will be their home and not a get-rich-quick scheme.

Habitat’s had so much trouble gaining a foothold in Marin that the local chapter closed its doors in the 1990s. The San Francisco-based group led by Killbridge has taken up the effort to create affordable ownership housing in Marin, using a steering committee of Marin residents. If the four houses in Sotelo’s neighborhood are built, they will be the first-ever Habitat homes in Marin County.

“This is a real chance for us to make a difference in the community,” Killbridge says. “Once this first project is completed in Marin, it will be a huge learning opportunity and help things move forward.

“The first project is always the most difficult,” Killbridge adds. “Once folks see how great this development is and how great these Habitat for Humanity families are, I think it will be an opportunity to build even more homes [in Marin County].”

Sandwiched in an unincorporated area of Marin County between Tiburon and Mill Valley, Ed Sotelo’s stretch of North Knoll Road just off Tiburon Boulevard holds two houses–Sotelo’s and one other–plus a gas station, a medical office building and a veterinary clinic. At the north end of the short street North Knoll Road, Eagle Rock Road and Bay Vista Drive swoop downhill on blind curves to an intersection devoid of stop signs, sidewalks or other traffic accoutrements. Sotelo calls it the killer corner; in the past 10 years, there were 209 collisions in the general vicinity, with 112 injuries and two deaths.

“We have nothing against Habitat. We support it,” Sotelo says. “But the area that they’re putting it in, it’s unbelievable. The roads cross here and it’s one of the most dangerous in Marin County.”

“One of the most valuable parts of this process so far is that our public works department has identified that intersection as worthy of investments to make it better,” McGlashen explains. “A wide variety of interventions are being explored. The good news is that intersection will get some much-needed attention one way or another, whether or not the Habitat for Humanity project happens.”

Residents worried about additional traffic should focus more on the three proposed market-rate homes, McGlashen says. The average expensive home on a hill generates up to 11 trips a day by residents as well as gardeners, household help and other workers, McGlashen says, while there’s empirical evidence that affordable housing generates a lot less traffic.

That’s the sort of thing that can be discussed in the coming months.

“One thing to note is that this project has a long way to go,” McGlashen says. “The design review board, the planning commission and the board of supervisors will all take a look at this project pretty carefully.”

It’s important to carefully shape a project that works well in the area.

“Marin County has a chronic lack of affordable housing, so finding suitable locations all over the county is critical,” McGlashen says. “It must be done.”

A similar process is unfolding in Napa County. After a four-year search, Solano Napa Habitat for Humanity has an option to buy a potential home site on E Street in downtown Napa, if the property can be subdivided. Although the group has built 11 homes in 10 years in nearby Solano County, this will be its first in high-priced Napa County. There’ll be a community meeting in March to discuss the possibilities.

Solano Napa Habitat for Humanity president Steve Brothers says potential volunteers tend to show up with hammers in their hands, ready to pound nails. “Most people don’t understand how long it can take to acquire property and get it approved for development.”

A registered architect and certified planner who only recently retired his California real estate license, Brothers has spent 35 years getting building projects approved. There’s always initial opposition to new housing, he says, whether it’s “affordable” or not.

“One of the common characteristics is that neighbors always object,” Brothers explains. “I believe that’s because it’s a change. It doesn’t mean the project is bad; it just means it’s a change.”

That’s why it’s critical to explain who the Habitat for Humanity homeowners will be and how the process works, says Amy Lemmer, outreach and development manager for Habitat Sonoma County, which has constructed eight new homes and remodeled 18 others since 1984.

“People’s fears are valid and they need to be addressed, but we’re not going to stop building affordable housing in our community just because people are uncomfortable. People need housing. Our mission is that everyone has a decent and affordable place to live.”

If people who work in the North Bay can’t afford to buy here, they’ll purchase a home elsewhere and commute, adding to traffic congestion and pollution, and leaving them little time to become productive members of their communities, because so much of their lives are spent on the road. Creating affordable homes they can buy in the areas where they already work is the best alternative, Lemmer says. And they make great neighbors, she adds.

“[Habitat homeowners] are much more screened than any other neighbor you have next to you,” Lemmer explains. “They go through a rigorous screening process so you usually get a much better neighbor than if you get some random person moving in next to you.”

Often, Lemmer adds, nearby residents who originally oppose a project end up supporting it, even helping with the volunteer labor. “[But] sometimes they just get dug in and then they just want to be right.

“I think it takes courage to rethink your position.”