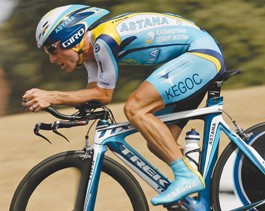 Riding with the King

TRAINING WHEELS: One of Levi Leipheimer’s favorite training routes will be the path his Oct. 3 benefit ride follows.

Levi Leipheimer—world-class cyclist, three-time Tour of California champion, USA road champion, Dauphiné Libéré champion and Santa Rosa resident with four Top 10 finishes in the Tour de France—still clearly remembers the first time he rode King Ridge Road, in 1996, soon after coming to Sonoma County.”I was blown away,” Leipheimer says on the phone from home. “It wasn’t the first ride I did in Sonoma County, so I’d had a good taste of our cycling roads before then, but when I did King Ridge Road, I was just blown away. I couldn’t believe that there was this road that went on for hours without any cars or any sight of anyone out there. It was just beautiful. It’s hard to really describe what it’s like.”

So when the city of Santa Rosa found itself struggling again to raise funds to host the Tour of California for a fifth consecutive year, Leipheimer hatched an idea. Why not host an open-invitation ride, charge a modest entry fee, and donate the majority of the net proceeds to the city for the Tour?

With city officials and local cycling leaders, he began planning what’s known throughout Europe as a GranFondo, a long-distance open ride for pros and amateurs alike. Leipheimer, of course, knew just the route to take. “When I had the idea to do the GranFondo, there’s just no question,” he says. “You have to go on King Ridge.”

On Oct. 3, Levi Leipheimer’s King Ridge GranFondo will bring in 3,500 cyclists from 38 different states, with more from as far away as Guam and England. The effort to keep the Tour of California routed through Santa Rosa will receive 65 percent of the net proceeds, with the remaining 35 percent going to Forget Me Not Farm, an animal-therapy center for at-risk youth. For Leipheimer, it’s really just another chance to show off the incredible local cycling roads.

“Yeah, it brings a lot of money, it brings a lot of coverage to our city,” he says, “which are very important things. But I think more than anything, what I want to do is try to make Sonoma County and specifically Santa Rosa more cycling-friendly. I want it to be like Portland or Davis. When people speak about America’s great cycling towns, I want Santa Rosa to be one of them.”

Raissa de la Rosa, involved with fundraising for the Tour of California with Santa Rosa’s department of economic development, knows that such visibility comes at a price. “This is just a miraculous answer to some of our money woes,” she says. “What were the other options? There really weren’t very many.”Hosting the Tour of California 2010 will cost the city up to $180,000, de la Rosa says, and unlike years past, none of that money will be available from the general fund. The private sector, also, is as dry as it’s ever been. “We’d have been scraping it together to the bitter end,” de la Rosa says. “There was a really good chance that we were going to pull the plug.”There’s no telling exactly how much the GranFondo will bring to the city, but Leipheimer wants to make it an annual event, and a fast sellout this year raises the possibility of a higher entry fee in years to come. One thing the organizers don’t want, however, is to raise the cap on the number of riders.

“While there could have been a much greater revenue stream from allowing more people to register, we’re focusing our efforts on providing a quality event,” says Carlos Perez, editor of Bike Monkey magazine and director of the GranFondo. Perez has even visited volunteer fire departments along the route to discuss the ride and to assuage residents’ concerns.

Earlier this year, Leipheimer ran a training camp in Sonoma County with his Astana teammates, including Lance Armstrong and Alberto Contador, and in addition to Pine Flat and Spring Mountain Roads, he led them to King Ridge. (“Besides being blown away by the scenery,” he recalls, “they thought it was pretty tough.”) For the GranFondo, he plans to intentionally ride slower to keep pace with the amateur riders—”I’m going to fall back through different groups,” he promises—although the 103-mile King Ridge route causes Leipheimer to offer a word of caution.

“There are a couple of key climbs you think of when you’re doing the loop, but if you focus too much on those, then a road like Seaview becomes deceivingly hard,” Leipheimer advises. “You get past the climb on King Ridge, you climb out of Hauser Bridge, and you get the sense that it’s just downhill to Jenner. But it’s really not the case. It’s very hard on Seaview, and then you descend down onto Highway 1, you’ve got some climbs, and then of course the way we’re gonna go is up the famous climb for the Tour of California, which is Coleman Valley. So it’s very tough.”