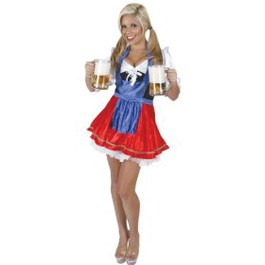 Germans have a word for everything. Their language gives us names for ideas and feelings so elemental to our lives and way of thinking, but which often elude our paltry English nomenclature. Schadenfreude, Doppelgänger, Weltanschauung and Zeitgeist hold important positions in our lexicon. To add to the list of expressive Germanisms: Bierleichen, literally translating to “beer corpses,” people so full of the foamy stuff that they can’t even move. Expect to see loads of beer corpses soon, because October gives us another German word to watch out for: Oktoberfest. The North Bay is hopping with lederhosen-clad goodness. Here are some of der Beste.

Besides offering its seasonal Oktoberfest Lager, a week of schnitzel and strudel and a big ol’ German pig roast, Silverado Brewing Company’s Oktober Fest ’09 lets its guests party like Rhineland rock stars (e.g., David Hasselhoff) with a night of German club music. This event, including an appearance by the Jager girls and ample techno, caps off a week of events such as a traditional Bavarian Beer Hall night and a five-course Brewer’s Dinner with Silverado’s owners and brew masters. Silverado’s weeklong fest blitzes Tuesday&–Sunday, Sept. 29&–Oct. 4; club night, Oct. 2. Silverado Brewing Co., 3020 St. Helena Hwy., St. Helena. $29.50&–$65. 707.967.9876. http://oktoberfestsbc.blogspot.com.Why not get pleasantly besoffen for a cause? The Sonoma County Museum hotly anticipates its Big Oktoberfest Bash II, a fundraiser for the museum with loads of microbrew tasting from the breweries Lagunitas, Russian River, Third Street Ale Works, Moonlight, Marin Brewing Co. and Moylan’s. Live music from indie rockers Crazy Famous, the Spindles and DJ Paul Timberman will keep the already spinning room moving. Monogrammed beer glasses come with tickets for the Bash on Friday, Oct. 9, at the Santa Rosa Veterans Memorial Building. 1351 Maple Ave., Santa Rosa. 5&–8pm. $25&–$40. 707.579.1500, ext. 13.With loads of sauerkraut, Würstel and Käsespätzle, Napa will be pumping with polka and high sodium levels for the first ever Napa Valley Oktoberfest, a day-long event of music, food and brewskies. Onstage will be the Deutscher Musikverein of San Francisco, the Al Gruber Band and Grass Child. Imported Spaten as well as local favorites like Downtown Brown will be flowing from the taps on Saturday, Oct. 17, at the Napa Valley Expo. 575 Third St., Napa. 11am&–10pm. $10&–$15, free to anyone in full German costume. 707.256.3200.In case our collective cup isn’t already runningeth over, Barley and Hops Tavern’s Second Annual Oktoberfest brings more German food, more German music and way more lederhosen and dirndl-wearing volk. The tavern hosts three nights of special festival menus and extended hours with music by Tami Gosnell and authentic beer steins. Raise that stein and watch out for the dreaded day-after katzenjammer on Friday&–Sunday, Oct. 2&–4. Barley and Hops Tavern, 3688 Bohemian Hwy., Occidental. 707.874.9037. Prost!