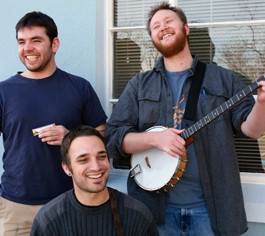 “With the current economic conditions, we knew we needed something bigger. Music is about as broad-based as you can get,” says Phil Swetin, development director for the Earle Baum Center of the Blind. Since 2008, Santa Rosa’s only area agency dedicated to serving people with sight loss has focused fundraising efforts around Earle Fest, a music festival billed as “A Celebration of Americana Music.”Set for Sept. 26, this year’s Earle Fest offers lower ticket prices and a focus on the North Bay music scene’s wide-ranging talent. All proceeds from the event go to the Earle Baum Center general fund, helping to provide services to those who might not otherwise have access to the rehabilitative resources available through the organization. Those who love good, old-fashioned Americana music will find much to celebrate in the festival offerings. Old Jawbone (above) bring their mandolin and banjo-infused tunes to the small stage, preceded by the teenaged bluegrass of those youth tutored by the late great Chip Dunbar, the Mighty Chiplings. The literate emotional soundscapes of the Trailer Park Rangers opens up the large stage, followed by the Mississippi Delta blues of Johnny Rawls and the Blues Defenders, among such other acts as Houston Jones, the Rhythm Rangers and Solid Air. A definitively local affair, Lagunitas will be pouring microbrews, and the Santa Rosa Junior College culinary group plans on offering sandwiches and other fare for a small fee.

Swetin hopes to see a repeat of last year’s attendees, a sign of the “integrated” community that he says the Earle Baum Center prides itself on cultivating. “We had 10-year-olds. We had 90-year-olds. We had people in the peak of health. We had people with severe disabilities,” he says. “Everybody seemed to join together, break bread, listen to music. It really had the feel of community.”

With a diverse lineup of seasoned musicians alongside young up-and-comers, Swetin believes the event will appeal to a broad range of musical tastes and ages. “We feel that we will grow the crowds over the coming years. We’d like to see this as an annual tradition in Sonoma County,” he says with an optimistic smile. “There is an opportunity for it. There is a demand for it.”