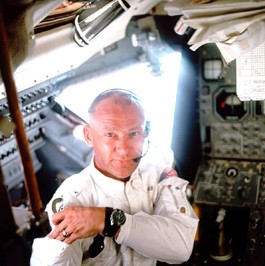 Review: ‘In the Shadow of the Moon’

New doc gives the back story on the Apollo missions and more.

The Apollo Program, which sent nine missions to the moon from 1968 to 1972, coincided with four violent years in American history. There was a widespread belief at the time that some authorities were using the moon to eclipse the war in Vietnam and the riots in inner cities. Nihilistic jokers could even buy a poster showing Neil Armstrong on the lunar surface with a mockup of a Daily News front page, complete with screaming 120-point block letters: “SO WHAT?”

During these similar times of tarnished American self-esteem, the prince of cinematic uplift Ron Howard has put his name above the title of David Sington’s documentary In the Shadow of the Moon.

And it is high time to re-interview the Apollo astronauts. All three of the Apollo 11 team are approaching their 80s. Twelve men eventually walked on the moon, and six are interviewed in the movie. The disinclination of brave men to reveal much about their feelings, NASA’s PR department and Time-Life‘s editorial standards all conspired to make the astronauts seem like a gang of flattops with fly-over country accents. But then you read Buzz Aldrin’s fine memoir, Return to Earth, or Michael Collins’ Carrying the Fire and discover that they had personalities. Alan Bean, of Apollo 12, claims he was among the more fearful of the astronauts and the one who admits to wondering just how thick that porthole glass was.

A major hole in the movie is the absence of Neil Armstrong. Armstrong is the dictionary definition of the recluse: n., a man who avoids reporters. The Apollo 11 lunar landing was scarier than NASA made it look; the lunar module, Eagle, came within 60 seconds of a command to abort. One chilling moment in Shadow is the reading of a prepared statement, readied in the event that Aldrin and Armstrong were stranded forever: words to the effect that “they came in peace, and now they will rest in peace.”

In the Shadow of the Moon lacks the visual splendor of the highly recommended For All Mankind, a mesmerizing collage of the Apollo missions with 35 mm footage of the surface. The moon voyages were a triumph of science, carried out without the help of anything anyone today would seriously call a computer. But there is a fundamentalist element worked here, and that’s a sign of the times: the controversial reading from a fireproof bible of a page of Genesis during the Christmas 1968 orbit. Charlie Duke of Apollo 16 later became a born-again Christian.

Astronaut Gene Cernan, one of only three men to have traveled twice to the moon, talks of the emotional punch of seeing the world in one whole piece, the same matter Al Gore was discussing in An Inconvenient Truth. “There are two moons in my head,” says one of the astronauts, stressing the difference between his voyage and the view we all get at the inconstant moon.

From this film, you get a sense of stillness that might stay with one forever after such a journey: stillness, and the memory of an immeasurably sharp contrast between a luminous bone-clean desert and a deep black horizon.