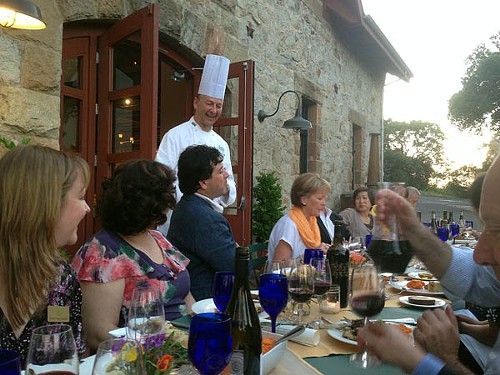 Rob Mondavi makes some damn good wine—but you already knew that. The news might be that he’s equally as adept at talking about the process.

At the first in the new “Eat. Drink. Learn.” series last night at the Rudd Center at the CIA’s St. Helena campus, we learned the winemaker and son of Michael Mondavi (yes, of the famous Napa wine family) did not rest on his laurels after the family winery was sold in 2004, instead he set out to make wines under a new label that represented his family. There’s Isabel, the line crafted with to mother’s tastes; M, the classic, bold cabernet made with his father in mind; and Emblem, a line for he and his sister’s modern, more adventurous spirits.

Part winemaker, part Tony Stark doppelganger, Mondavi detailed the process of each of the six wines we tasted, from soil to maturity. The hour-long session never dragged, thanks in part to Mondavi’s energized presentation, passion and lack of PowerPoint slides. He answered questions and offered the personality behind the wines rather than force feed predetermined tasting notes, allowing, for the most part, the wines to speak for themselves.

The standout for me was the last wine, the Emblem Oso Passito NV 2012. It’s a dessert wine, in the way that it’s sweet, rich and is sold in small bottles. But this wine is more than just a nice finish to a great meal, it’s contemplative and deep, great for any time of day, and it does not have to be chilled. Its grapes are dried on the vine, and it’s quite labor intensive, but the result is well worth the work.

After the lecture was a meal prepared by Russell Scott, CIA education dean and one of only 66 Certified Master Chefs in the country.

I could have eaten a dozen of the duck prosciutto and melon hors d’oeuvres. The meat was sliced thicker than usual for prosciutto, and was wrapped around a peppered melon ball with a small fresh mint leaf hidden inside. Fresh, salty and sweet, it was like Viagra for my appetite.

The sea scallop melted away in a wash of rich oceanic goodness, with the crunchy frisee and spring beans providing textural counterpoint. Smooth lemon aioli was not heavy at all and blended the flavors perfectly. The dry, toasty Chardonnay’s acidity was especially pleasing with this dish.

The lamb rack was prepared simply and served with a chimichurri of shallots, garlic and fennel with wine. Potato and mushroom terrine was served with the two facets separately, a good idea considering mushrooms’ propensity to get lost in a baked dish. Carrot and parsnip mash and the buttered romanesco were simple and delicious, owing to the freshness of the vegetables. CIA faculty chef Lars Kronmark, seated next to me, remarked on his fondness for simple dishes made with high quality ingredients. I agree—sometimes, it’s best to let great farmers do much of the talking.

The finishing touch, “Crespelle Isabel,” was made to pair with the Passito wine. A touch of the wine went into the blood orange sauce, which was just bitter enough to give a balance to the sweetness of the crepe. Filled with ricotta and aromatics that complimented the wine, the crepes themselves were chewy and flavorful. I could have eaten them with every course.

The series continues with two more winemakers hosting a tasting session and staying for dinner prepared by CIA faculty. Cost is $115 per person, tax, gratuity and wine included. Upcoming events feature Richie Allen of Rombauer Vineyards on May 16 and Dan Petroski of Massican Winery on May 22. Compared to other fine restaurants in the area, this three course meal is well worth it—the tasting class and chance to dine with passionate winemakers is just the icing on the crepe.