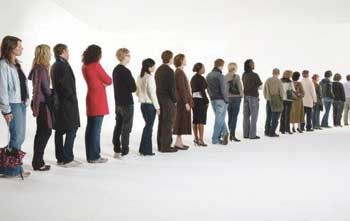 Last week, first day of the month, there I was, at the DMV. What was I thinking? The line snaked out the door and around the corner. People were even standing in the middle of an adjacent eucalyptus grove, for chrissake. But it was the first, the time to get your expired tags taken care of.

Tags are a necessity in my ongoing effort to never get pulled over. But I dread going to the DMV. I haven’t figured out how to do this online, but I needed to drive, and soon.

A lady in a purple T-shirt handed me a purple sheet of paper. I could see the door of the DMV up ahead, about a mile away. “Help us make these lines shorter!” the paper read. Tell me more.

The purple sheet and the ladies are part of the Local 1000, SEIU, the largest state-worker union.

A man standing in front of me grumbled as he read the sheet. “They probably make more than me.” It’s an old saw: state workers make a lot of money. After my interminable wait in line, I later spoke with Jodee Smith, the southeast area coordinator of the Local 1000, about just this concern.

“It’s a public misperception,” she said, “But the fact is, state workers make less than comparable jobs in the private sector.” Smith gave me the range of monthly wages for DMV workers: $13 an hour for starting, and $18 per hour for the most senior positions. Small potatoes. In fact, I’ve worked a number of crappy jobs in California, and always got paid more than that. No wonder I’ve noticed that the employees are almost always women (women still earn less than their male counterparts), and no wonder they’re in such bad moods!

On that point, Smith agreed, telling me that in the last five years 243 positions have been lost at the DMV. That is, when people quit or were fired, the state never replaced the workers. At the same time, California grew by 2 million drivers. This means more work crammed into a day for each employee, which results in the classic short-tempered, hurried, stressed-out DMV worker. This then leads to a bad public image and people like me dreading a trip to the DMV.

Fewer workers also translates into more time in line. According to Smith, the wait at the DMV has doubled from 40 minutes to 80 minutes on average.

“You know what they really should do?” the fella in front of me said. I got out my pen. “They should automate all of this. I mean, they can use those retinal scanners and hand scanners. It’d be so much quicker.”

Mmm, and so much easier for someone to get a driver’s license, rent a truck and blow up some national monument. Can a machine read your proof of insurance? Or detect if your documents are fraudulent?

Workers have such an easy job, the logic goes, that we can just use robots to replace them. But what many people don’t understand is that the workers have to actually think. They must know about new laws (just last year, 14 new ones relating to the DMV were added) and apply them. Examples: the new teen driving rules, or laws regarding commercial trucking, in which employees have to issue the appropriate licenses in each different case.

Don’t get me wrong. I’m a fan of self-serve lines in the grocery store or the post office–but at the DMV? I don’t think so. You can do some things online, like make appointments and address changes, and request copies of forms. And the state is motivated to modernize as much as possible. In fact, the 6 percent increase in DMV spending Schwarzenegger is proposing will all go toward “modernizing,” in addition to building maintenance.

But there’s nothing about hiring more DMV workers. These positions are not just people manning the windows, but include public driver safety officers. Have you ever wondered who monitors elderly and sick drivers? In the past, with more employees, the DMV investigated high-risk drivers, people with medical restrictions like Alzheimer’s. However, the number of investigations, because of the worker shortage, is on the decline.

Until something changes, I’ll just stay here, in line.

Oh, you like lines? E-mail Novella at [email protected]