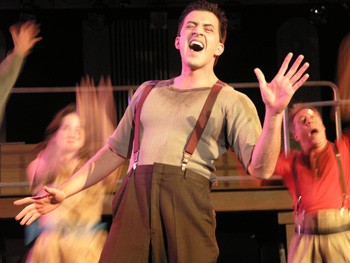 Wall o’ Wazz: Actor Matthew Lazzarini is among the stellar cast in ‘Urinetown.’

‘This is not a happy musical.”

So explains an imperious enforcer named Officer Lockstock (Dodds Delzell) in the lively opening moments of Urinetown, the edgy apocalyptic musical by Mark Hollmann and Greg Kotis. Now running at the Sixth Street Playhouse in a superbly crafted, great-looking production by the Santa Rosa Players, Urinetown marks one of SRP’s chanciest artistic risks in years. Under the inventive, playful direction of Argo Thompson, such risks pay off, resulting in a show unlike anything you’ve seen this side of San Francisco for some time.

That said, Urinetown is not an easy show to describe. How can it be a happy musical when its characters are randomly arrested and disappeared for daring to take a leak without paying at a high-priced public “amenity”? How can a show with urination as a running theme be a happy musical?

Truth is, it doesn’t matter. And one of the charming things about Urinetown is the way it tells its story of corporate greed and the sheeplike cluelessness of the masses while teasing and tweaking the musical art form it represents. At the top of the show, Lockstock welcomes the audience to Urinetown, adding, “Not Urinetown, the place. Urinetown, the musical.” The actual Urinetown won’t show up until the second act, he explains, and hints that even then it will be largely metaphorical. This expositional monologue is interrupted with the warning, “Nothing kills a musical like too much exposition.”

Later, when the heroine, the rich and privileged Hope Cladwell (Emily Sanford) meets the idealistic rabble-rouser Bobby Strong (Matthew Lazzarini), Lockstock justifies their inevitable love affair by shrugging, “He’s the hero of the show–she has to love him.”

It is 20 years after an ecological disaster known as the Stink Years, a time when water became so scarce that bathrooms were cut off and people relieved themselves in the streets. The city has since become a police state, private ownership of toilets is outlawed, all public amenities are owned by the ominous Urine Good Company, and everyone must pay to pee. The stylish, effectively simple set by Wayne Hovey, enhanced by the clever lighting design of Josh Cuellar, takes us from the streets of the city, where the poor panhandle for change as they stand in line at Amenity Number 9 (“the filthiest urinal in town”), to the spotless office building of the Urine Good Company, owned by the tyrannical Caldwell B. Cladwell (Jeff Gould), Hope’s charming but evil father.

The cast is among the best large-scale ensembles SRP has ever brought together, built from some of Sonoma County’s finest character actors. The leads include some stunning voices, especially Lazzarini, Sanford and Cara Burgoyne as urinal manager Penelope Pennywise. The wild, full-throttle choreography by Vicki Suemnicht is sensational to watch.

The one drawback to this production is an auditory one. The ensemble, who look great, dance spectacularly and boast fine voices, are frequently hard to hear, with their voices either drowned out at times by the fine orchestra, or–since the ensemble is not miked–just swallowed up in the set. That’s a shame, as whole chunks of songs, packed with clever lyrics, end up rushing by without the audience being able to make out the words. Fortunately, there is plenty of time left in the run to fix the problem.

Ultimately, Urinetown is an exciting, creative night of theater that is well worth lining up to see. If this seems an unlikely conclusion to make from a play about urinals, then all I can say is, peeing is believing.

Christianity in the Third Millennium