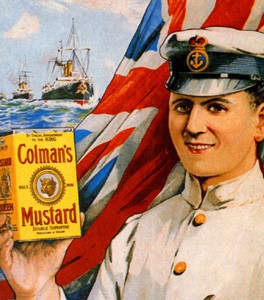 Mean Mr. Mustard: Jeremiah Colman once remarked that he had made his fortune from what people left behind on the side of their plates.

In which we learn an unusual amount about one certain condiment

Judging by his portrait, Pope Jean XXII, who ruled from the picturesque town of Avignon during the early 14th century, was a dour man with a penchant for yellow satin mantles lined with fur. But his humorless visage must have masked a creative impulse. Strapped to find a job for his nephew, who reportedly lacked the brains for a cardinalship, the pope devised a new position: grand moutardier du pape, or “grand mustard maker to the people.” Thus was born the expression “the pope’s moutardier” to describe an unintelligent person who is well-connected.

Mustard remained an indispensable spice for society’s most upper crust, and three hundred years later, Louis XIV insisted on packing a pot of mustard to accompany him on all his voyages, a royal security blanket of sorts for the Sun King.

But mustard also enthralled the populace, taking hold of the collective imagination and offering solutions to an array of practical dilemmas. A German peasant woman would sew mustard seeds into the hem of her wedding gown to ensure that she’d wear the pants after marriage. The mustard seed also makes a cameo in the Bible as a parable about how something tiny can grow into something strong and powerful.

In India, mustard seeds distributed around the perimeter of a dwelling are said to ward off evil spirits. In Denmark and ancient China, mustard was used as an aphrodisiac. And ever since pre-Hippocratic times, when Greek scientist Pythagoras first wrote about it as a treatment for scorpion stings, people worldwide have used mustard preparations medicinally to treat everything from epilepsy to toothaches. Even the Bard writes it into Henry IV, Part 2, when Falstaff says, “His wit is as thick as Tewkesbury mustard!”

At its piquant heart, mustard is the most populist of spices. Practically ubiquitous, it has never carried the price tag of rarity, unlike its imported brethren peppercorn and vanilla. The hearty mustard plant enjoys the resiliency of a weed and knows few geographical boundaries, growing anywhere and everywhere. After marketing genius Jeremiah Colman founded his eponymous English mustard in 1814, it eventually garnered such attention that Queen Victoria appointed him as royal mustard maker in 1866.

In the 1920s, a Colman’s ad campaign called upon the talents of novelist Dorothy Sayer (then slumming as an ad copywriter) to conceive of a fake group, the so-called Mustard Club. The club was peopled by the likes of Lady Di Gester and Master Mustard, Lord Bacon of Cookham and other punny players. For some seven years, the Mustard Club flourished, attracting hundreds of members, creating a short film, filing a prank lawsuit against a restaurant that allegedly refused to make its mustard fresh each day and producing a monthly newsletter, a recipe book, club songs and even a deck of playing cards. The brilliant thing about the Mustard Club was that everyone could belong.

To this day, the spice retains much of its accessibility, albeit one limited to more conservative and mostly palate-related purposes.

Now fields in the North Bay are aglow with the bright yellow blooms of the mustard plant. However, even in an age ruled by science, the plant’s wintertime presence here is still explained by legend. It is said that many years ago, the Spanish missionary Father Junipero Serra scattered Spanish mustard seeds along his Missionary trail.

And then of course, there’s mustard’s role in the lure of tourism. Now in its 13th year, the annual Napa Valley Mustard Festival, which started as a way to entice tourists to the area during the slow season, is a two-month-long series of festivities in honor of the pungent spice.

Ironically, Napa’s nonnative mustard plants are not one of the varieties used in condiment making, though they can be served as greens. Popular among vintners and grape growers, the weedlike plant also adds nitrogen to soil and helps keep the dirt in place during heavy winter rains. The golden flowers should find themselves quite at home in Napa’s vineyards. The very word “mustard” derives from the way the Romans prepared the condiment, mixing the powder from ground mustard seeds with unfermented wine, also called must or verjus.

Although mustard seeds have been unearthed from Egyptian tombs, it seems that the first written records of the spice as a condiment weren’t made until the 14th century. Most notably, the city of Dijon restricted the condiment’s ingredients exclusively to high-quality vinegar and mustard seeds. Mustard has evolved since then, however, especially in the United States, where, oddly, no federal standard defines what constitutes a mustard, although ketchup is not so neglected.

As new mustard condiments become more creative, some are also getting more honest. Robert Curry, executive chef of Auberge du Soleil and host chef of this year’s festival, explains that since the 1990s there has been a trend toward making better mustard more accessible. “Instead of being this kind of bland, plain, American mustard, it’s gone to a stronger, Dijon-style mustard that you’d recognize on your grocery shelf. There’s more acidity now. It’s more tangy, more honest, truer to what mustard really is,” he comments casually.

But the mustard green itself has always had a solid, honest and sensible presence in regional cuisines worldwide. Peter Pahk, executive chef of Napa’s Silverado Resort and winner of last year’s People’s Choice Chef Award, focuses on the mustard green as a soul food, cheap and slow cooking. He remembers his mother pickling mustard greens to make kimchi. Although the Korean dish is traditionally made with cabbage, mustard was widely and cheaply available where Pahk grew up with modest means on the island of Oahu.

Later, as a longtime employee of the international Ritz-Carlton, he tasted different regional preparations of mustard greens, from the Philippines, where it’s often braised, to Singapore and Hong Kong, where it’s stir fried with dried shrimp and fermented black bean sauce, to the American South, where it’s braised again, but with beans and pork.

Mustard’s identity, however defined, is transcendent. Gritty Manhattan street vendors offer steaming potato knishes, which they’ll slice deeply into, generously filling the void with day-glo yellow mustard squeezed from a French’s container. But whether zigzagged across a ballpark dog or piled into a thimble-sized bowl between charcuterie and cornichons, it unifies us, or at least, our palates. And rest assured. Says Pahk of the Great Unifier, “It’s not going away.”

Mustard, Mud and Music Spend a lazy day quaffing wine and listening to jazz in this darling hot springs town at the top of the Napa Valley on Saturday, March 11, in downtown Calistoga. 11am to 4pm. $10 includes music and first five winetastings. 707.942.6333.

Spicy Competition The international crème de la crème of mustard contests is “the competition for mustard makers,” according to Barry Levensen, judging coordinator for the contest. Levensen curates Wisconsin’s irreverent Mt. Horeb Mustard Museum, and makes a point to sign all his correspondence “Condimentally yours.” This year, the festival received 350 mustard entries for its Worldwide Mustard Competition, far more than any previous year. The black-tie event also includes a chef’s competition. Meet the men and women under the toques, when 18 chefs vie to win the People’s Choice Award or the Critic’s Choice Award for mustard-focused recipes. Moutardiers and chefs abound at the awards on Friday, March 17, at the Lincoln Theater. 100 California Drive, Yountville. 7pm to 10pm. $100-$150. 707.944.1300.

Tongue Sizzles Tasting mustards from around the world is set to the tunes of internationally acclaimed pianist Henry Butler, a musician from New Orleans. Other Naw’lins-inspired musical treats slated are swamp-boogie, blues and zydeco music (a portion of the festival’s proceeds will benefit the New Orleans Musicians Hurricane Relief Fund), along with less regional folk, jazz and R&B. Stroll through COPIA and its grounds to sample foods, wines, fine arts and crafts at the annual Mustard Marketplace, Saturday-Sunday, March 18-19. COPIA, 500 First St., Napa. 11am to 5pm. $5-$35. 707.944.1133.

Shooting the Mustard The festival culminates with a mustard-focused photo contest for amateurs and pros alike. The fancy Mumm Napa Photo Finish event wraps it up with hors d’oeuvres, wine, dessert and music on Saturday, April 1, at Mumm Cuvée Napa, 8445 Silverado Trail, Rutherford. 7pm. $85-$100. 707.944.1133. For more information on these and other festival events, or to order to tickets, visit www.mustardfestival.org or call 707.944.1133.