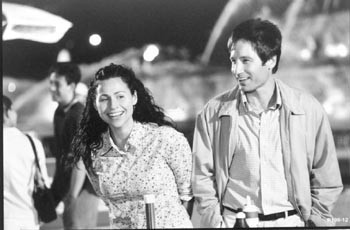 Heart of the matter: Minnie Driver and David Duchovny star in Return to Me.

Author Jane Smiley on horse hearts, weeping at movies, and ‘Return to Me’

The three of us–Smiley and Jack . . . and I (now feeling a bit like a fifth wheel)–are sitting in a darkened San Francisco theater, watching the end credits of the sentimental romance Return to Me. Still a bit misty-eyed from the film, Smiley wraps her arms around her similarly teary paramour, resting her head affectionately on his shoulder.

“Romantic movies,” Smiley happily confesses, “always put us in the mood to cuddle. We usually run right home and go to bed.”

Jane Smiley, the 1992 Pulitzer Prize-winning author of A Thousand Acres, has a habit of saying things like that.

In conversation, she is a constant wellspring of honest, unprotected proclamations so candid and personal they take you by surprise, offered in a confident, easygoing manner that somehow makes you feel all warm and cozy. The Monterey-based writer is, in fact, as disarmingly authentic and truthful in person as she is in the pages of her rich, insight-laden novels.

Smiley is currently in the midst of a book-signing tour for her latest novel, the delightful, fast-paced racetrack epic Horse Heaven (Knopf; $22), about the inhabitants–human, canine, and equine–of a Northern California horse ranch. Eagerly, the author has taken the afternoon off to go to the movies.

Which brings us to Return to Me, a romantic comedy in which a grieving widower (David Duchovny of X-Files fame) finds himself strangely drawn to an eccentric young woman (Minnie Driver) who is still recovering from a heart transplant. The catch is that, unknown to both of them, Driver’s heart donor was Duchovny’s first wife, a brilliant scientist who died in a tragic car accident.

“I liked it. The romantic comedy is an art form that really interests me,” Smiley says as we depart the theater and head for a sunny bench at a nearby park. “I think romantic comedies are very, very hard to make work, maybe the hardest type of movie there is.

“The problem is, the two stars are obviously destined for each other–the two biggest names in the movie are always destined for each other–so the audience knows from the beginning what’s going happen. A romantic comedy is all about keeping the stars apart for two hours until you can get the biggest jolt at the end when they finally come together.

“So in critiquing this kind of story,” she continues, “you have to ask, ‘Are they realistically kept apart?’ In this case, they were mostly realistically kept apart, but they lost me when they both discover the truth, that she’s got his dead wife’s heart, and they’re so overwhelmed that they run away. What was that about? Personally, I would have said, ‘Wow! Terrific! You’ve got her heart? That’s so cool!’ I would have instantly felt that it was a wonderful thing.

“But then, of course, you’d be messing with the very heart of the Hollywood romantic-comedy format.”

AND SPEAKING of hearts: Smiley–an avid equestrian and racing aficionado who now owns several racehorses–takes the opportunity to offer this fascinating factoid.

“The average horse heart weighs seven pounds,” she reveals. “That’s about seven times larger than a human heart. Horses, by nature, have big hearts. And the great racehorses, like Secretariat and Eclipse, have hearts that are even larger. Eclipse’s heart was 16 pounds. Secretariat’s heart was 22 pounds.

“The theory is that these hearts simply are much bigger pumps of oxygenated blood. Secretariat never showed fatigue. The longer he ran, the faster he went, and the better he liked it.

“When we say that a human has heart,” she continues, “we mean that they are kind or generous people. But when you say a horse has heart, it might be a nasty, unpleasant horse, but it’s a determined horse, a horse that wants to run and won’t stop trying.”

Those qualities, of course, are also prized in humans, “though they tend to be called stamina and pluck,” says Smiley. “My basic theory about the cinema is that movies are all about male endurance and female pluck. The most attractive men are the ones that seem to be suffering, but they endure it stoically–and David Duchovny does suffer nicely in Return to Me–while the most attractive women in movies are the ones that have a lot of, you know, oomph. Women who are down but not out.”

“Well, Minnie Driver was a little bit plucky,” Smiley allows, “but she didn’t have quite enough pluck to make a truly classic Hollywood female.”

She was pluckier in Good Will Hunting. Or Grosse Pointe Blank.

“I loved Grosse Pointe Blank,” Smiley admits. “I love the scene where the hit man, John Cusack, was talking to his secretary on the phone while he was calmly, coolly making a hit. It’s one of the sexiest scenes ever put on film. That scene always turns me on.

“He was so totally cool, totally expert. Of course, he wouldn’t have had to be killing someone for that scene to be sexy. He could have been hammering a nail. It still would have been sexy.”

But did it make Smiley cry?

“Sure,” she laughs. “But I cry all the time. Crying is an important part of being alive. I think a good day is when you cry, when you laugh, when you eat something good, when you ride a horse, when you write something, and when you make love.

“That’s the recipe for a perfect day,” says Smiley. “You have to cry at least once or it’s not truly perfect.”