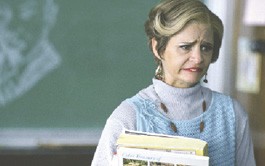 Return of the Skag

'Strangers' a hysterical take on the back-to-school flick

As played by Amy Sedaris, the world’s greatest female drag queen, Jerri Blank, the 47-year-old anti-heroine of Strangers with Candy, is an alarming sight: cellulite wobbling under tight pants, her eyes frozen in an arrested squint, a debauched face as toothy and squashed as a carved beaver on a totem pole. Her eyebrows are painted with Joan Crawford’s old spray gun, and the ensemble is crowned with the last of the Geraldine Ferraro “helmet hair” coiffures. Strangers with Candy should be classified as number 50 1/2 on AFI’s list of the 50 Most Inspirational Movies Ever Made. What could be more uplifting than the story of a teenage runaway, crack addict and pavement princess who in middle age returns home and goes for her high school diploma?

Just out of prison, Jerri returns to find her dad comatose from grief, her mom in an urn and an evil stepmother running the joint. Determined to make good, she goes back to where her life left off, but finds discrimination from the “populars” at Flatpoint High School.

Flatpoint High is troubled anyway. The school has an imperious principal (Greg Hollimon) who rejoices in the name Onyx Blackman. (Imagine a mother with a What to Name the Baby book working her way down the roster of semiprecious stones, before settling on a rock used to make tourist hash pipes in Juarez.) To see Onyx is to get a crush on him; he has an organlike voice, a mammoth bald head and a slow double take, like Margaret Dumont parsing one of Groucho Marx’s ambiguous compliments.

Principal Blackman’s spot of embezzlement has endangered the school, and they need to win a crucial science fair to stay open. In what seems like a hopeless effort, Jerri takes on the challenge, with the aid of an Indonesian exchange student (Carlo Alban) and her soon-to-be-regular-chum Tammi (Maria Thayer); the latter is an innocent little redheaded girl perplexed by Jerri’s mysterious question about whether “the carpet matches the drapes.”

Strangers with Candy is a filmed prequel to the TV comedy, which ran for two seasons on Comedy Central. America’s most respected commentator Stephen Colbert recreates his role as Chuck Noblet, inept yet portentous history teacher (“I need more out of this relationship than I’m willing to put in”) and clandestine lover of art teacher Geoffrey Jellineck (the film’s director, Paul Dinello).

A number of guest-stars pad the skinny plot, including Allison Janney (seduced by Onyx) and Philip Seymour Hoffman (traduced by Onyx). Matthew Broderick is an unscrupulous science teacher, Sarah Jessica Parker is a grief counselor who solicits cash tips and Ian Holm is the Blank family doctor who reminisces about how Jerri was born with a full set of teeth. (Holm the Shakespearean probably remembers how the same was said of Richard III to foreshadow his bad character).

Compared to that crowned hunchback, Jerri has a winning personality–which is one way of describing a person who’ll sleep with anyone, man or mule. If what made Napoleon Dynamite work was the idea of the wrath in the weirdo’s heart, Sedaris gets at that essence. Hilarious when being crushed, she’s also divine when she’s lashing out. If they’d only remake Monster with Jerri Blank in the Charlize Theron role.

‘Strangers with Candy’ opens July 7 in lots of places.