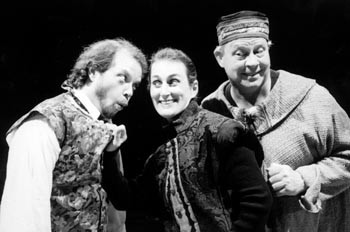 A truly gifted wordsmith, Moran makes happy bedfellows of burlesque and screwball with frantic antics and ribald gags set against historical fact and dressed in myriad literary and pop cultural references. Moran must have been weaned on flicks like Casino Royal and What’s New, Pussycat?, for his play reproduces much of the same droll if cockeyed spirit. Often absurd and ultimately charming, Repertory! soars on featherweight wings of farce and satire.

Eric Thompson tips the comic Richter scale with his usual radish-faced bluster as Ben Johnson, who suffers being paid by the word and consequently lets his prolix predilections run rampant.

Cameron McVeigh, a likable performer with a facile stage manner and delightfully contrived stammer, does well as the enfant terrible Marlowe. Though effective in the role, McVeigh frequently seems one degree removed from his character–as if he’s acting as though he’s acting as Marlowe.

One of the more interesting themes Moran explores amid Repertory!’s cavalcade of Beatles allusions is the impact of death on a group dynamic. News of Marlowe’s historical murder is foreshadowed by John Lennon’s posthumous Beatles hit “Free as a Bird.” By associating his four characters with the Beatles, Moran underscores the fragility of artistic collaboration.

Marlowe’s death marks the end of the characters’ dream of starting a theater colony as well as a coming-of-age for the nascent Shakespeare, whose individuation as a writer was stymied by Marlowe’s celebrity and literary prowess–and so concludes the play’s single character arc.

SCR should be applauded for staging this work. By doing so, the company defies all other local theaters to likewise produce homegrown material. One hopes that Repertory! has set the stage for what is to come for local theater.