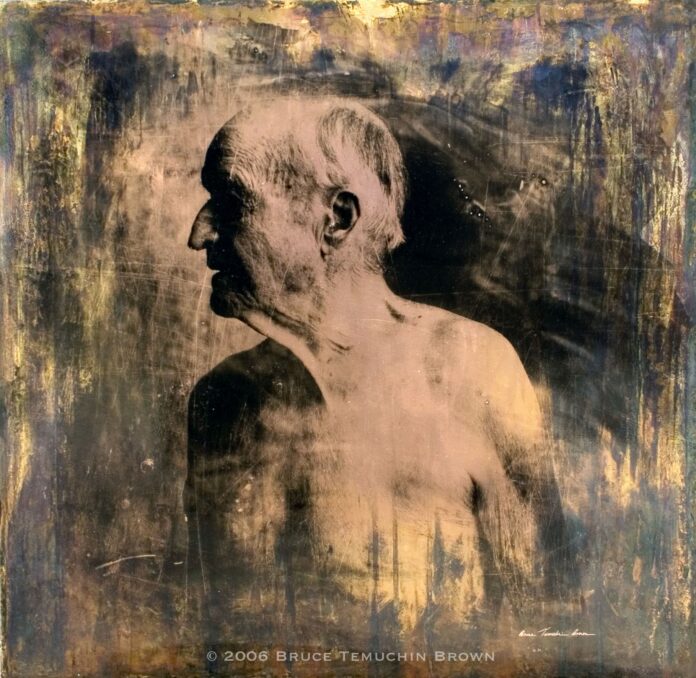 What a tremendous loss of our dearly beloved Rene di Rosa recently, what a vanguard he was. I knew him for 30 years, and he will be sorely missed, and if you ever met him or knew him and his amazing ways, you already know that.

This photograph of Rene  was taken by local fine art photographer, Bruce Temuchin Brown. Rene loved Bruce’s photographic work on copper and was the first to buy from him in early 2006 after I introduced the two at a gallery where Bruce’s work was showing.

Enamored with Bruce’s style and process, I asked Rene if he would pose for Bruce, to which he said “yes,” as long as he didn’t have to “completely disrobe.” Bruce’s work is figurative and has to do with the human condition in all of its glorious forms, thus Rene’s query about being full-on nude when posing.  I was present the day the photos were taken at the Preserve, and Rene was a dream to work with, seemingly titillated to be a part of something he admired.  When he saw the finished traditional photographic treatment of his image on copper, he fell in love with it and wanted to buy it for his home at the Meadows, where it is still hanging there, no doubt.

I share this  because not only is it a stellar capture of one amazing art-loving human being, but also due to the sheer beauty in how Rene is depicted in art, as he was art, which is riddled with irony.  This same image, though a bit different in treatment on the copper, was also collected by the Crocker Art Museum for its permanent collection.  The Crocker Museum also loves the painterly quality that the piece have, and they, too, collected another of Bruce’s images, which ironically is the same one that Rene purchased as a first sale for Bruce.  Great minds?

Rene supported a lot of Bay Area artists and contributed to their success due to his visions and forward thinking.  I loved going along with Rene when he went “shopping” or looking for art because of his keen eye and sense of folly, as he somehow knew to trust that there was a brilliance he was sure no one else might see. He did pride himself on being a first buyer of an emerging artist and for paying small amounts that would later pay off in what has proven to be bucket loads of success for many artists.

Knowing Rene as well as I did and for so long, and in the spirit of wishing to promote a local extremely talented emerging artist that Rene admired, it feels prudent to pass this along to share what I see as brilliance times two.California art collector Rene di Rosa died on Sunday, Oct. 3, at age 91. To learn more about his art of collecting, go to www.disrosaart.org.

admin
Previous articleAnnouncing Our 2010 ‘Prompt Jive’ Writing Contest!
Next articleOct. 6-13: Across the Bridge