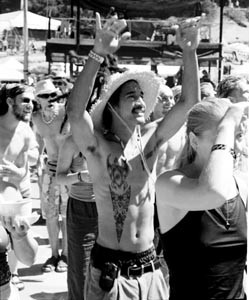 Reggae on the River

Reggae on the River keeps ’em coming back for more

HOT, POINTY ROCKS. Blazing sun. No grass, no shade, and thousands of sweaty people producing body heat for four days. Sound appealing? Not to me. But it did to the nearly 10,000 people who paid $100 a pop to be a part of the 17th annual Reggae on the River festival early this month.

Reggae on the River–which serves as a benefit for Humboldt County’s Mateel Community Center–is the most popular reggae festival on the West Coast. Each year, thousands of college kids, Rastafarians, families, hippies, and people from every walk of life check in for a weekend of music, food, and atmosphere on the banks of the Eel River, near the old logging town of Percy. Indeed, the festival sells out annually before the lineup is even announced.

What keeps them coming back for more?

“It’s the party of the year! I wouldn’t miss it for anything,” says one 10-year festival veteran. “Each year, I go and see people that I only see one weekend a year, but that I’m as close to as any of my friends at home. There’s a feeling of affinity between the people that you get to party with at every reggae [festival]. Everybody gets together and roughs it for a weekend. Once you create that history–you’ve done it a few times and have stories to share–it develops a feeling of family between the people that go together.”

“It’s definitely a family,” agrees Scout, second-in-command of the festival’s security staff. “I’ve been coming for 13 years, and my pay is reasonable, but that’s not why I’m here. I love the people that come, although they’re different from year to year.”

We arrived on Thursday afternoon, hot and cranky from traveling for three hours in 100-degree heat. The last thing we wanted to do was search for a campsite. We decided to check out the digs before we packed our stuff in, and were glad that we did. A bunch of acquaintances who’d been camped since Monday had saved us room under a pavilion as large as a small house. When we set up our tents, we had the coolest sarong-enclosed front yard ever.

When the gates opened on Friday morning at 6, the onslaught began. What on the prior afternoon had been an area of hot rocks and a handful of naked hippies bloomed today into a mecca for sunhatted campers with their hauled-in couches, vans, and tents . Before the afternoon concerts began, we wandered through “the bowl,” the actual concert site–an enormous outdoor stage surrounded on one side by food and beer vendors and on the other side by festival-gear vendors selling straw hats, cowry-shell necklaces, handmade hippie clothes, and the other usual festival accouterments. Behind the stage lay the Eel River, which we swam in after the tiring business of shopping for appropriate earrings.

On Friday evening after the headlining act Mixmaster Mike (DJ for the Beastie Boys), we returned to camp. Down the path in the volunteer campground stood three school buses with a huge parachute stretched over the top to form a dance hall. There was a DJ spinning house and hip-hop records in a cage on top of one of the buses. On closer inspection, I recognized him as an old friend from Sonoma County.

The reggae vibe had intermingled with the usual hip-hop vibe (or maybe it was the ganja smoke in the air?), and there were a bunch of frat boys alongside dreadlocked Rastas, all feeling the one love. Unfortunately, security pulled the plug after we’d been there only about 15 minutes (no generators are allowed at the event).

WE CRUISED UP and down the rocky camping and parking area, the happening place of the evening, and wound up at a school bus with history. Founded a few years back by the Wicked Crew, a collective of Bay Area house DJs who’ve since become too well known to bother playing reggae, the bus announces its destination above the windshield as HEAVEN. After grooving out to amazing Jamaican DJs, we returned to camp to regroup and collect more beer. The girls decided to stay at camp for a relaxing evening around the keg, and the fellas went out to have an “I can party harder than you can” testosterone competition.

We slept in till 10 on Saturday. After waking and breakfasting on fresh fruit and Zima, I wandered around the bowl, alone, snapping shots and listening to music by Natural Vibrations and Johnny Dread. Backstage, I ran into Fantuzzi, world-famous hippie and poster-boy for the original Woodstock (on the cover of Newsweek) and emcee for the Woodstock of the ’90s (he describes the 30th anniversary celebration as “a nightmare”).

When asked how the reggae festival scene has changed since the ’60s, he replied, “I don’t get tired of it. It’s the tribal revival getting started with the youth. The next generation takes the movement and moves it! It’s an honor and a blessing to have been chosen to be an ambassador of joy.”

With such legendary performers as Bunny Wailer, Jimmy Cliff, and Anthony B. encouraging festival-goers to practice peace, unity, and “one love,” it’s easy to see how acceptance and understanding between people of all ages, races, and social classes can grow. Reggae on the River offers world-class music 24 hours a day with thousands of people all in the same frame of mind. I’m sold!

Next year, I’ll be one of the hordes buying a ticket before I even know who’s playing. As a friend aptly put it, “If you didn’t like reggae music before you went to Reggae on the River, you’ll like it afterwards!”