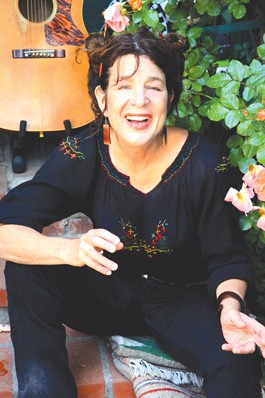 “I’ve been about to make it any minute now for 40 years,” Teresa Tudury says matter-of-factly as she prepares to celebrate the release of her new CD, Such Fine Things. It’s actually the fifth release for the Occidental singer-songwriter, if you count all the way back to the early 1980s, but only her second since 1992.

“You cannot imagine the opportunities I’ve had that I’ve managed to eff-up,” she continues. “I used to think that I was terribly self-sabotaging, but in retrospect I realize I was self-preserving, because the media-driven entertainment industry is so toxic, and they tell every artist, ‘You need to be in Nashville or Hollywood,’ and I dutifully showed up for that. But my soul was just in total rebellion to all of that.”

That subconscious antipathy first took the form of “a big, long bout of alcoholism,” Tudury admits. But even after attaining and maintaining sobriety in 1983, she stayed on in Hollywood.

“I had a big following in L.A., it was great. And then at the end of 2001, just as it seemed like I was getting very successful,” she recalls with a rueful laugh, “I had this really horrible neurological explosion, a thing that’s called global trauma, and it just took everything. It was several years before I could even talk right. I never dreamed I’d be playing music again.”

A chain of circumstances brought her to Sonoma County, where nearly six years later she was able to once again pick up a guitar and begin piecing together some of her old songs. Now fully recovered, she marvels that “it was almost like that illness recalibrated me. I believe with all my heart that my soul would rather have me dead than live an inauthentic life. So it did whatever it had to do to get me out of Hollywood and get grounded.”

That turbulent history is in no way apparent when Tudury takes the stage these days. Adroitly accompanying herself on guitar, she moves smoothly between detailed folk balladry and broadly humorous songs with a political underpinning, her often hilarious off-the-cuff commentary providing the connective tissue that unifies the performance.

“Being onstage is where I do my best work and my best thinking,” she says. “When you’re on stage, there’s nowhere to go. You have to be immediately present and working in the moment with what is going on in the room with the people there. It’s very intense to be plugged into that, and I really enjoy that about my work.”

For Tudury, performing is the inverse of composing. “When I’m sitting and I’m trying to catch a song and its coming though me, it’s kinda the same place I go when I’m sitting onstage,” she says. “It’s the same sort of spontaneous, mysterious, unconscious world.

“I never really know what I’m going to write about,” she continues. “If a song starts to come, I put down whatever else I’m doing and go sit with it. That’s the one big discipline that I’ve learned, to not turn my back on a song when it’s trying to come through. I just try and get out of the way and let it start to unfold.”

Even more than her original material, Tudury’s voice commands attention, a bold, free-ranging contralto that soars from a whisper to a full-throated roar as it leaps between octaves, embracing nuance easily as it moves from a demure straight tone to a force-of-nature vibrato. It was a seventh-grade guitar teacher who awakened her recognition of this remarkable instrument, and sent her off to her first coffeehouse gigs, she recalls. “But I’d been singing to myself as a baby in the crib. I just came in making music, no question about it.”

With a background that includes an opera-loving Creole father from New Orleans, and her own fondness for distinctive singers like Dinah Washington, Aretha Franklin, John Lee Hooker and Sarah Vaughn, Tudury embraces her current musical life gratefully. “Everything I could imagine has been given up to me in a life of music,” she affirms softly. “These songs and this lifestyle is my spiritual path. I take this work very seriously.”