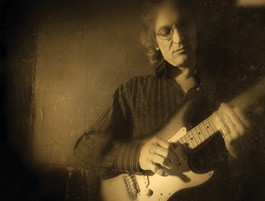 No, Sonny Landreth does not have an invisible third hand

Playing slide guitar didn’t come easy for Sonny Landreth when he started learning at age 16. “I was really frustrated,” he remembers via phone from his Louisiana home. “I couldn’t make heads or tails of it, and certainly tortured the family, and our dog. My dog, I think, suffered the most. Sonically, for him, it had to be excruciating. It got to the point where I’d just pick the guitar up, and he’d start running.”

These days, Landreth picks up the guitar and he’s the one off and running. Dazzling and inventive, he works the frets like a tap-dancing spider, both hammering the strings of his Stratocaster and nimbly weaving them into and out of each other with a slide on his pinky finger. His endless spindles of technique have moved just about every major guitarist to sing his praises, and most who hear him swear he’s grown a third invisible hand.

Growing up in Lafayette, La., Landreth worked selling marching band instruments at Professor Erny’s Music Co., where a co-worker turned him on to the finger-picking of Chet Atkins. The next year, he discovered Robert Johnson; the year after that, B. B. King, Clifton Chenier and Jimi Hendrix hit his radar. It’s as good a summation as any for Landreth’s multifaceted style. “With all of that going on,” he says, “and with the backdrop of the culture here in Louisiana, it just made for a real rich environment.”

While it would be fair for Landreth to join the ranks of stratospherically marketed “guitar gods” like Joe Satriani, Steve Vai and Eric Johnson, the easygoing 58-year-old appears genuinely uninterested in the requirements for the role. He doesn’t wince his mouth into an aggro rock face when he solos, nor does he overly use effects pedals. He’s never quite fit the tag of a “musician’s musician,” appealing to nonguitarists as well as the Fender faithful.

Known largely for his long association with John Hiatt, Landreth at last is seeing acclaim pouring in for his solo work. From the Reach, his latest album, features diehard fans Eric Clapton, Mark Knopfler, Dr. John and Jimmy Buffett, and in 2008 he was given a long-overdue honor on the cover of Guitar Player magazine, which he’s avidly read since its first issue. Tendonitis hasn’t slowed him one bit, as he still develops new methods for his deep trick bag. See him when he plays on Saturday, Oct. 24, at the Last Day Saloon. 120 Fifth St., Santa Rosa. 8pm. $22&–$25. 707.545.2343.