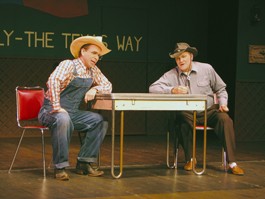 Brilliant acting is the highlight of an unevenly paced 'Greater Tuna'

Greater Tuna, an outrageously goofball, darkly tinged satire set in the rustic burg of Tuna (the third smallest town in Texas), successfully manages to be two opposing things at once: smart as a whip and dumb as a post. Actually, that sounds like something that Tuna’s smut-fighting Rev. Spikes might say in one of his hilariously cliché-packed sermons. As in the scene in which Spikes improvises a eulogy crammed with words entirely devoid of meaning (“He was a fine, upstanding citizen who practiced what he preached, put his best foot forward and his money where his mouth is!”), Greater Tuna, and its three popular sequels, appeals to people with the taste and tolerance for extremely broad comedy, but has also won the loyalty of higher-brow folks who happen to have escaped from the kind of gleefully racist, homespun, semi-illiterate Southern town that Tuna is a simultaneous love letter to and savage skewering of.

The award-winning, 28-year-old, two-actor comedy, covering several days in the life of the denizens of Tuna, Texas, is the second Tuna play in six months to be presented by the Pacific Alliance Stage Company. Last December, PASCO delivered A Tuna Christmas, technically the second in the popular series by authors Jaston Williams, Joe Sears and Ed Howard. Once again, actors Stephen Klum and Michael Storm do brilliant work under the direction of artistic director Hector Correa. In a tradition that started with the first performances of Greater Tuna in Austin, Texas, in 1981 (with authors Williams and Sears the original performers), all 20-plus roles, male and female, are performed by two actors, requiring Zenlike concentration to keep all the characters distinct, and some rapid-fire costume changes, many of them taking less than 15 seconds.

Both Storm and Klum admirably tackle the challenges with inventive performances, incredibly detailed physicality and some truly ingenious voice work. Storm displays a talent for defining characters through a series of well-defined body languages, giving each one a peculiar limp, twist, hunch, stroll or strut. Storm’s characterization of Pearl Burras, an elderly woman addicted to killing the town’s dogs with poison; the imperious Bertha Bumiller, a leading member of the Smut Snatchers of the New Order; the aforementioned Rev. Spikes; and Thurston Wheelis, one of two unflappable talk-show hosts on Tuna’s decidedly rural OKKK radio station (“Beef is up, pork is down, chickens are vacillating”), are particularly strong.

Klum (known to regular PASCO audiences for his fine performances in Proof, Sylvia and others) does stunning work as well, showing a skill for falsetto-voiced children and women never hinted at in his other performances at Spreckels. Notable are Klum’s portrayals of overweight teenage poetess Charlene Bumiller, who dreams of becoming a cheerleader; adolescent Joey Bumiller, who loves dogs as much as Aunt Pearl hates them; soft-hearted Petey Fisk, whose efforts on behalf of the local SPCA include his frequent appearances on OKKK to sing the praises of the un-adoptable Yippee, a hyperactive Chihuahua; Arles Struvie, the other talk-show host on OKKK; and Stanley, a reform-school sociopath who is Aunt Pearl’s dog-killing accomplice and who may have been the not-so-accidental cause of a local judge’s untimely recent demise.

As Klum and Storm leap in and out of character, the shenanigans of Tuna’s small-minded townsfolk are certainly funny, but for all of the first-rate acting, there is something strangely uneven about this production. Perhaps it’s the leisurely pace determined by the director. This sort of entertainment is best served fast and furious, like a Mel Brooks spoof or one of those Airplane-type comedies.

When Greater Tuna is funny, the show is a certified side-splitter, and that is reason enough to recommend it. Unfortunately, there are a few too many moments when the satire just sits there, as the with the local radio station’s regular KKK reports, delivered by a benign Klansman who is so casual and upbeat about announcing upcoming Klan activities he could be describing the annual Rotary crab feed.

Brilliant? Sure. Funny? Not really. And yet, for a night of solid, off-beat amusement with big dose of strychnine, PASCO’s Greater Tuna is a whole lot better than OKKK.