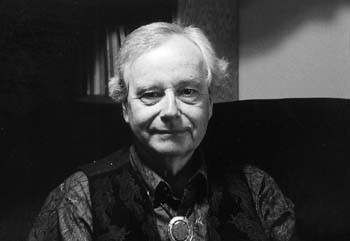 Cultivating the spirit: Ex-LSD guru-turned-transformative psychologist Ralph Metzner, a Sonoma resident, has published an updated version of his classic The Unfolding Self.

THERE IS A FAMILIAR painting hanging over Ralph Metzner’s living room couch. Instantly recognizable as one of visionary artist Susan Boulet’s most famous works, its striking image of a handsome Native American shaman wearing the ceremonial skin and head of a large gray wolf–or is the shaman transforming into the wolf before our eyes?–has been reproduced on postcards, prints, and posters around the world, decorating the dormitories and wooded sanctuaries of countless free-thinking neo-pagans and metaphysical adventurers across the globe.

What sets Metzner’s copy apart from all the others is that his Boulet is not a print.

“It’s the original,” he shyly confesses, a slight shrug rising and falling as he leads a tour through his art-filled, comfortably rambling house near downtown Sonoma. It is congruous with Metzner’s status as a central figure of the transformative consciousness movement that he would become the keeper of a painting that is arguably one of the better-known symbols of an expanding cultural acceptance of traditional, multi-ethnic, decidedly mystical spiritual systems.

After all, Metzner is responsible to a great degree for the mid-’60s burst of consciousness that started it all in the first place.

Such praise appears to embarrass Metzner, perhaps the humblest–certainly the least publicized–of that once-notorious human potential trio of Harvard professors that also includes Timothy Leary and Richard Alpert, aka Ram Dass. Now considered something of a psychedelic Holy Trinity, Metzner, Leary, and Alpert created a stir with their studies of LSD-induced spiritual experiences, and co-authored the classic book The Psychedelic Experience.

After leaving Harvard, each ventured his own way: Leary went underground, Alpert traveled to India, and Metzner, after years of practicing psychotherapy in a variety of settings during which he wrote numerous books–including the groundbreaking Opening to Inner Light in 1986–eventually settled in the Bay Area.

Metzner is a Distinguished Professor of Psychology at the California Institute of Integral Studies in San Francisco, where he has taught since 1975.

After years of working in relative solitude, Metzner has once again entered the public spotlight with the recent release of The Unfolding Self: Varieties of Transformative Experience (Origin Press; $14.95), an expanded and renamed edition of the long out-of-print Opening to Inner Light, which sold 10,000 copies in its original incarnation. Much has changed in the popular culture during the last 13 years. With the miraculous resurrection of Metzner’s sadly neglected book–an examination of 12 universal metaphors employed by the world’s many religions to describe the experience of spiritual transformation, with two new chapters and a spate of new illustrations–a whole new generation of scholars and seekers is suddenly taking notice of Metzner once again.

RICH IN FOLKLORE and psychological insight, The Unfolding Self explores the obvious meanings and hidden meanings of those central metaphorical ideas we use to describe our most profound spiritual metamorphoses: stepping from darkness into light, for example, and the image of being set free from inner captivity, of dying and rebirth, of being cleansed in the heat of a purifying fire. The restored chapters treat the metaphors of integrating the inner wild animal, and unfolding the Tree of Life.

“The book is really about the idea of psycho-spiritual transformation,” Metzner summarizes, “and the way people experience it according to the classical traditions. The new chapters are the kind of ecological themes that have become much more central a part of my focus in the time since the book was written.”

A pivotal force in the book’s timely re-release is its publisher, Byron Belitsos of Origin Press. Something of a visionary himself, Belitsos is the founder of IntegralSpirit.com. An innovative web-magazine and on-line community dealing with issues of integral spirituality points of view, the site also sells books that deal with similar themes–several hundred thousand are listed–and is fast becoming known as an Amazon Book Service for the spiritual community.

Origin Press, Belitsos long-planned brainchild, has only just made its publishing debut, with the Metzner reissue as its first offering.

“Ralph is perfect for us, actually,” says Belitsos. “He’s brought a terrific amount of scientific thought and academic methodology to these very esoteric realms. People know Leary. They know Ram Dass. It’s time for Ralph Metzner to be known.

“I personally think he’ll end being considered the most important writer of the pack.”

Asked how he feels about being eternally grouped with–and compared to–Leary and Ram Dass, Metzner’s eyes light up. “I feel fine about it,” he smiles. “I was very close to them, I remained very close to Leary right up until his death, and I was with Ram Dass last night. We’re close friends. I feel very fortunate to have had two such great spirits, great beings, as my teachers, my friends, my mentors.”

Leary’s death of cancer, Metzner points out, and his publicly voiced intention of experiencing his own death as the ultimate trip, brought Leary a level of wide respect and admiration that he had been deprived of throughout his life. His fearless view of death as just another transformation may, in fact, have helped raise the nation’s consciousness in regard to its inability to deal with the notion of dying.

“Coming near to death is probably, from my experience, the trigger for the most profound kind of transformative experience,” Metzner softly remarks. “Whether it’s a near-death experience of the classical kind, where someone is in an accident and then moves out of their body, or through a loved one dying, either a child or a parent.”

Metzner has experienced such an event firsthand; his own son, Ari Krishna Metzner–to whom the book is dedicated–was killed in an accident in 1974.

“Sometimes,” he adds, “the transformation comes, as with Leary, in coming near to one’s own death in illness. People have been miraculously transformed through such experiences.”

Metzner’s work seems to suggest that there is a built-in desire to transform ourselves into better, or perhaps only different, human beings. “People do want transformative experiences,” he affirms. “We all desire personal growth and change. People go on vision quests in search of change. They involve themselves in various spiritual practices. It’s a very general, very human thing.

“[Healing specialist and author] Andrew Weil and others now say–and I agree with him–that healing is the natural capacity of the human organism, or any organism for that matter,” he muses, gazing up again at the painting of the shaman caught halfway between two versions of himself. “We are spiritual beings,” Metzner concludes.

“To seek a spiritual vision, to have a desire to experience spiritual healing, that is something that is inherent in every single individual.”