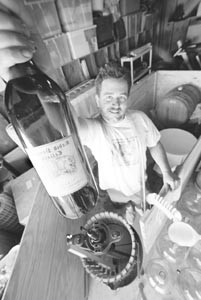 IN MARKETING parlance, Jan Anderson’s winemaking setup would be called “rustic.” In all blunt honesty, it’s downright primitive. The 35-year-old Healdsburg resident (whose first name is pronounced “yawn”) tastes and blends his wine in the garage of his rented house. The entire operations of Rabid Possum Cellar–one barrel, a few glass jugs, and right after the crush a few food-grade plastic garbage cans–fit into a hinged plywood box that encloses the wine and protects it from swings in temperature. In an uninsulated garage, those can be extreme; right now, for example, the garage is at least 85-90 degrees, estimates Anderson. “I used to keep a thermometer out here, but it was just giving me head games,” he says with a good-natured shrug. “If this is what I’ve got, I can’t stress about it. I just do the best I can.”

Home winemakers make jokes out of such situations–one group in Sonoma County is called the Garage Enologists of North County (GENCO for short). But the reality is not a laughing matter. Home winemaking, more than commercial winemaking, is an endless struggle with the elements, with the physical realities of temperature, space, and time.

Temperature is particularly key during the first fermentation. Too hot, and the yeasts that make wine from the grape juice die off. Too cold, and those same yeasts just can’t get going (one cold winter Anderson had to box up his wine in the “cellar” with a space heater so that fermentation would start). Later, wine is often chilled to stabilize it or to crystallize the tartaric acids for removal. Commercial wineries place their wine in stainless-steel tanks and run glycol through the double walls of the tank to bring the wine close to freezing.

But even though he’s got a pretty good home setup, GENCO president Bob Bennett has to chill his wine the old-fashioned way: “We put it outside at night for three or four nights in the coldest part of winter.”

Space is another troubling issue. Bennett has a three-car garage and a custom-built wine room on his Windsor ranchette. But many winemakers are in Anderson’s shoes, with a garage that has to hold both the wine and the washing machine. “A winery has space to leave stuff aging,” says Anderson, looking around at the crowded space. “Like at Jordan [where Anderson is a maintenance worker], they age things in the barrel two years and then age it in the bottle for another two years. I just don’t have the space for that.”

SEBASTOPOL resident James Knight has had much the same problem since he started making wine five years ago. “You have to be in the same spot to store your wine; otherwise you’re moving it around a couple times a year. You have to get your friends to store your wine or you’ve got to carry it around with you, and you have to store it at a reasonable temperature, which is just about impossible in rentals.”

Knight, 31, is one of the younger generation of home winemakers. Older enologists have had more time to get ahead, and their winemaking establishments show it. Otis Holt has been custom-building an estate home designed around his winemaking operations on 10 acres in Sebastopol. His space is heavily insulated and conditioned to maintain the temperature at an even 61 degrees. There’s space for six or seven 30-gallon French oak barrels and for rows of five-gallon glass carboys.

Holt’s methods are precise, down to using inert gas pressure to shift the fluid instead of pumps that bruise the wine and expose it to oxygen. He is a strong proponent of home winemaking, and even goes so far as to claim its potential superiority to commercial winemaking.

“You can be so meticulous about it,” he says. “The very best wines in the world are likely to be found in somebody’s winemaking setup.”

Holt’s real advantage lies with the grapes: he grows them himself.

“Having control over my own fruit is 90 percent of the battle,” he says. “I go out and pick fruit 100 pounds at a time. I don’t crush my fruit, I pay my helper to remove the berries by hand, so there are no stems, no leaves, no rotten fruit. That’s rare, having that degree of control of raw material.”

Most home winemakers, lacking the prosperity and the property, have to get their juice from someplace else, which often means buying grapes outright at prices that have skyrocketed in recent years or even making midnight raids on local vineyards.

Knight is so frustrated by this issue that he has begun to plant grapes this year in an unused corner of his parents’ property. “Other people’s grapes only cause me trouble,” he laments. “You can never tell until you’ve got them if they’re going to be good quality or not. You have to hunt for them, and they cost you.

“Even grapes that may not be good cost money.”

The alternative–picking free grapes out of other people’s vineyards–is not as free as it sounds. Gleaning after the first commercial harvest is possible, but second-crop grapes are a more common solution. These grapes are the product of inferior shoots on the vines and are lower in sugar and flavor than first-crop grapes.

But with every complaint comes a testimonial to the transformative power of garage-grown wine. Knight, even though he may be taking a hiatus from the hassle this year, still recommends it to others. “If you like wine, it’s a good idea to try to make it,” he says. “Getting your feet wet in grape juice with hornworms still crawling around it, it makes you appreciate what it really is. It’s this mucky, bubbling, bizarre process. “But you get this fine product from it.”